Tim Scott 2022 Reelection Odds For The US Senate

Online Sportsbooks With US Senate Odds

Who Is US Senator Tim Scott?

Tim Scott is a sitting US Senator from South Carolina who is 2022 candidate running for reelection. Tim Scott is unique in that he is the only African American elected to the US Senate that is a member of the Republican Party which is largely dominated by Caucasians in all walks of politics.

Sen. Tim Scott first became a member of Congress upon his appointment by Nikki Haley, and has since gone on to win a runoff election for an abbreviated term, as well as a 2016 US Senate victory that granted him a full six year term representing the citizens of South Carolina.

As per Tim Scott’s campaign trail messages for 2022, he is still aligned with former President Donald Trump, and that’s sure to sit well with South Carolina and their Republican voters.

While there are no odds for Tim Scott’s reelection to the US Senate in 2022 posted at online political sportsbooks at the moment, due to his national popularity, we expect them to appear as the election draws nearer, even if he is a certain winner.

Sen. Tim Scott has already announced his intentions to run for reelection to his South Carolina US Senate seat, and while we wait for the filing deadlines, we’ll simply list all eligible candidates below.

Odds For Tim Scott To Become President In 2024

Since the 2024 Presidential elections are years away, pretty much all politicians that have garnered any considerable national fame are featured in the odds to become POTUS in 2024.

Senator Tim Scott’s odds posted at Presidential Election sites are currently set at +10000, indicating a less than 1% chance of it becoming a reality.

Despite Sen. Tim Scott not having any direct Congressional odds offered up for betting at this time, gamblers may be interested in the following political prop bets that ask which political party will hold the majority following the midterm elections of 2022.

The above odds indicate that both the GOP and the DNC are within striking distance of taking or retaining control, making Senator Scott’s reelection crucial for Republican Party betting in 2022.

When Is Tim Scott Up For Reelection?

Tim Scott’s seat in the US Senate is up for reelection on November 8, 2022, but first, both the Democratic and Republican Party Primaries must conclude. At this early stage, all players have yet to be declared, but we’d be surprised to see any significant GOP competition in SC for Senator Scott.

Can I Bet On Tim Scott Now?

Yes, but not on his US Senate odds. Gamblers can lay some action on Tim Scott odds for the US Senate soon, as his election eve is drawing near.

Odds betting on the US Senate and the overall balance of power are available now and is a staple on the boards most of the time as the US House election betting renew every two years.

How Much Can I Win If I Bet On Tim Scott’s Odds?

The only bet on Tim Scott that can be made at this time are his odds to become President in 2024 which features a moneyline of +10000. A $1 on those political futures odds for President Tim Scott to be sworn into office in January of 2025 will earn savvy gamblers a $100 win.

Sen. Scott is a native of South Charleston in South Carolina and was born on September 19, 1965. When Senator Tim Scott was 7 years old, his parents divorced, and following that time, he and his two brothers were raised by a single mother who worked most hours of the day.

Tim Scott’s older brothers both entered the military, but he went the college route earning a partial scholarship for football. After graduation, Scott opened an insurance agency prior to following his political ambitions and serving on the Charleston County Council in 1995.

Senator Scott possesses a strong faith in the Evangelical Protestant religion and often consults biblical scriptures to strengthen his personal and political ethics.

Traditional marriages between a woman and a man, as well as anti-abortion policies are heavy hitters on his campaign trail. He possesses strong US nationalist views and opposes the infiltration of foreign corporations and their interests into American society.

Senator Scott is also in favor of restricting US immigration, and for those that are allowed in, requiring them to learn the English language. 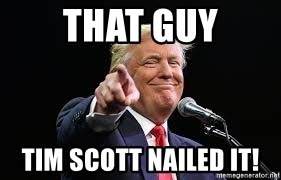 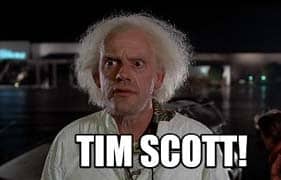 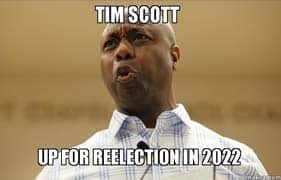 Below, readers can watch a video of the Tim Scott rebuttal to Joe Biden following his first address to the US Congress in April of 2021.

Is It Legal To Bet On Tim Scott’s Election Odds?

Yes, as long as political bets are made with an online sportsbook that is operating within a legal international gaming jurisdiction like the ones that are linked to on this page

Who is Tim Scott?

Tim Scott is a politician and US Senator based out of South Carolina. He has served the US Government for over 13 years.

Who is Tim Scott’s Wife?

Tim Scott is one of the few unmarried politicians in Congress. He does not have a wife.

What is Tim Scott Police Reform?

Tim Scott is an advocate for the police reform detailed in the JUSTICE ACT. The bill aims to make changes to hiring procedures and acceptable forms of restraint.

What are Tim Scott’s Opportunity Zones?

Opportunity Zones are areas of economic stress. Tim Scott wants to give private companies tax breaks for bringing development to rural and underdeveloped areas of the United States.

Was Senator Tim Scott a lawyer?

Although Tim Scott has been involved in politics for a very long time, he has never stepped foot in the courtroom as a lawyer.

Does Senator Tim Scott own a realty firm?

Senator Tim Scott is the owner of an Allstate brokerage in South Carolina.

It is hard to say how involved Tim Scott is on the buying and selling side of real estate but, to our knowledge, he does still get a slice of the pie from his Allstate firm.

Is Senator Tim Scott a Republican?

Tim Scott is one of the few Black Republican politicians in the US.

Who would call Tim Scott “oreo?”

Tim Scott was referred to as an “oreo” by Texas Democratic official Gary O’Connor. The racially driven remarks soon brought consequences, compelling O’Connor to resign in May of 2021

When was Tim Scott an actor?

Senator Tim Scott has never been involved in the fine arts. However, you may be confusing him with a late movie star of the same name.

Who is Trump to Tim Scott?

While the two have gone back and forth on opinions of policy in the past, Tim Scott recently applauded former President Trump during a rally in June.

Either via his official website or Tim Scott’s social media outlets, all of which are linked to in a section above.

Does anyone fact check Tim Scott?

Most people do not require a fact checker as most tend to have the common sense of checking their resources before making claims. Tim Scott is not likely to have a personal fact checker.

Where is Tim Scott’s DC office?

Will Tim Scott run for re-election?

At the end of June, Senator Tim Scott announced his re-election campaign for midterms in 2022.

Will Tim Scott run for President?

Many anticipate Tim Scott to run for President in 2024 because he seems to be fairly moderate. A candidate closer to the middle may be what the Republican party needs to take out Biden in 2024

What is Senator Tim Scott’s net worth?