2026 Lindsey Graham Reelection Odds For The US Senate 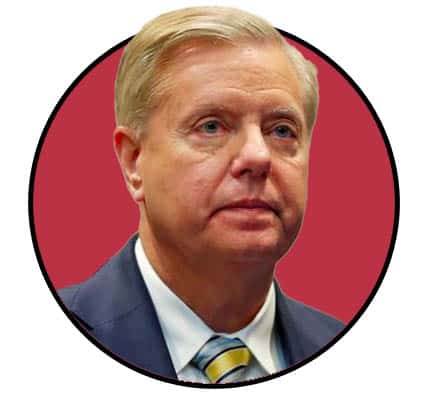 *More odds available at Bovada
2020 Senate Election Update (11/4): Lindsey Graham won reelection with 54.6% of the vote despite his challenger (Jaime Harrison) spending a record $108.9 million to unseat him.

Lindsey Graham is a sitting United States Senator from the state of South Carolina. He was elected to his Senate seat in 2003 during President George W. Bush’s administration and has held many positions of influence in Senatorial committees since that time. He is the former Chair of the Senate Judiciary Committee and could be one of the 2024 Presidential candidates if he chooses to run.

Many wonder what happened to Lindsey Graham when he suddenly flipped and began supporting President Donald J. Trump after dropping out of the 2016 US Presidential race. Although it didn’t make sense to the press and many observers, South Carolina residents got it because his position adhered to theirs. The 2026 Lindsey Graham reelection odds for the US Senate haven’t yet been revealed, but we’ve got some analysis to assist you for when they’re finally posted.

Who Is Lindsey Graham?

Senator Graham began his political career as a State Representative in the South Carolina House after being employed as a commissioned officer in the United States Air Force for many years. He then went on to represent the Palmetto State in the US House of Representatives for eight years until becoming elected to the US Senate in 2003. He ran for President of the USA in the 2016 cycle but was one of the early candidates to drop out.

Graham remains in the Senate to this day, and under President Trump, he and fellow Senator Mitch McConnell have become political power players and the main faces of the Republican Party. The two of them have a lot riding on the 2026 election, including their own seats.

Now that the DNC is in control of the White House, Lindsey Graham Senate Judiciary Committee assignments have been reduced from being the chair to serving as minority leader. One thing is for sure: Graham is not afraid of a battle where he faces long odds, and any competitor is in for the fight of their life.

Is It Legal To Bet On US Senate Elections?

Political betting is confined to offshore sportsbooks operating online because domestic operations do not accept wagers on politics. Betting on Presidential election odds or on 2020 Senate election odds with an offshore betting website does not violate any federal gambling regulations because these sportsbooks operate outside of US jurisdiction. Offshore betting is not sanctioned by any US authoritative body, but there are no laws that say you can’t do it.

Washington state has passed strict laws that forbid all forms of online wagering, but sportsbooks still accept members from there despite their laws. We’ve yet to hear of any arrests for the “crime” of online gambling, but all the same, bettors in WA are advised to obey all gambling laws and regulations.

Political odds that allow for betting on Lindsey Graham’s reelection chances at online sportsbooks have yet to be produced, but will almost certainly feature him as a solid favorite to retain his South Carolina US Senate seat.

Below are the current odds for the future balance of power in the United States Senate, and the Republicans and Lindsey Graham are drawing even at the moment with the DNC in their battle t0 reestablish control following the 2022 midterm elections.

Although Senator Graham does not appear in the Presidential Election odds at the moment, mostly as a formality, he is listed as a potential to earn the GOP Nomination in 2024. We use the word listed because he is certainly not favored, as his moneyline of +15000 equate to less than a 1% chance of victory in the eyes of political oddsmakers.

Can I Bet On Lindsey Graham Now?

Yes. Gambling on Lindsey Graham and his election odds are available now for his 2024 Republican Presidential Nomination chances, as well as betting lines on how the balance of power will shift after all ballots are cast in November of 2022. These odds will change as political events occur, so browse the political betting lines now to make sure you don’t miss out on an advantageous line.

How Much Can I Win If I Bet On Senator Graham?

The only odds on the board at the moment is the +15000 moneyline for Senator Lindsey Graham to become the GOP’s 2024 Presidential Nomination. If these long odds cash in, they’ll payout at $150 per each dollar wagered. Currently, the max bet possibly on these Lindsey Graham odds is $10, which will net $1,500 if he wins in 2024.

Sen. Lindsey Graham was born in Central, SC, in 1955. His parents ran a pool hall in town that served alcohol, and what he witnessed there caused him to abstain from drinking for his entire life (akin to Trump’s own experience with alcohol). When he was 21 years old and away at college, his mother and father died within six months of each other, and he ended up becoming the legal guardian of his 13-year-old sister.

Graham was able to stay the tough course of collegiate academia while raising a teenager, along with dealing with the loss of his parents himself. He also managed to serve amongst the ranks of the military reserve, parlaying that into a career position in the Air Force upon completion of law school. His determination and grit have served Graham well and are still evident today on the US Senate floor.

Senator Lindsey Graham decided to stay close to home and attend the University of South Carolina in Columbia, SC, while also acting as the legal guardian of his teenage sister after their parents passed away. In 1977, Graham earned a bachelor’s degree in Psychology.

Senator Graham then went on to study at the University of South Carolina School of Law, earning his Juris Doctorate degree in 1981. While in college, Graham served in the Reserve Officers Training Corps. Upon completion of law school, Graham’s military service became full time when he began active duty as a commissioned officer in the United States Air Force.

Before Lindsey Graham was first sworn in as a US Senator from South Carolina in 2003, he held the following political positions:

Lindsey Graham is strongly opposed to gambling, and in 2014, he introduced a federal bill that sought to ban online gaming nationwide. Luckily for political gambling aficionados, his bill failed, but you can bet that Senator Graham will press forth with his anti-gambling measures as long as he is in office.

Senator Graham has been the target of many memes that have been shared across the internet. Unfortunately for him, the vast majority have been in opposition to him, his campaign, and his policies. Here are a few of the more humorous offerings we discovered.

For those wondering if Lindsey Graham has ever been married, the answer is no. He has spoken about a long-term romance with a female in his mid-20’s that never resulted in marriage, but he has yet to walk down the aisle and exchange vows.

Is Lindsey Graham an alcoholic?

No. Senator Graham is staunchly opposed to the use of alcohol and has seen firsthand the harmful effects it can have on the body.

How old is Lindsey Graham?

Is Lindsey Graham an alcoholic?

Senator Graham does not drink and is not an alcoholic. Growing up, he witnessed first-hand the negative effects of alcohol on families and communities, as well as the harm it does to the human body, and has decided that it is best not to partake in the consumption of adult beverages. But he probably needs one.

Who is running against Lindsey Graham?

In Lindsey Graham’s South Carolina US Senate Republican Primary, he is facing off against Duke Buckner, Michael LaPierre, and Joe Reynolds. If he advances to the general election, and there is a great chance that he will, Graham will face Democratic challenger Jaime Harrison, as well as third-party candidates Bill Bledsoe (Constitution Party), Keenan Wallace Dunham (L), and David Weikle (L).

What does Trump have on Lindsey Graham?

Several points, at least. Political pundits have long speculated that President Trump has some information regarding Graham that he doesn’t want released to the public. This is because of Graham’s sudden change of position on Trump, condemning him viciously on the 2015 campaign trail but now supporting his every move. In reality, the support is likely due to the position of his constituents in SC. As Trump goes, they go, and so does Lindsey.

How tall is Lindsey Graham?

Lindsey Graham is 5’7” tall, three inches below the male average height in the United States.

When is Lindsey Graham up for reelection?

Is Lindsey Graham up for reelection in 2020? Yes, his South Carolina US Senate seat is up for grabs, and he is facing a host of contenders from both sides of the aisle.

No, Graham is not related to Graham, but he did offer the following words after attending a ceremony in the Senate honoring pastor Billy’s life and passing. “Billy Graham impacted countless lives. His contributions and legacy will be long-felt in South Carolina, North Carolina, across our nation, and the rest of the world.”

Questions like “Is senator Lindsey Graham gay?” pop up periodically because of his unmarried status. Despite the fact that he is a bachelor of advanced age, Graham is not gay and claims that he almost married a woman when he was in his mid-20’s.

Where is Lindsey Graham from?

Senator Graham was born in the town of Central, South Carolina, in 1955, where he remained until he departed for college at the University of South Carolina.

What is Sen. Graham’s net worth?

Many Lindsey Graham net worth estimates vary, but in 2018 his assets totaled up to just under $1 million. His wealth is based on his many years of military and political service, with his largest assets being his home and his retirement stock portfolio.

What is this Lindsey Graham, Lady G nickname all about?

Senator Lindsey Graham has been the subject of rumors that he is gay. Furthermore, certain opponents of Sen. Graham refer to him as Lady G, indicating that he has allegedly used a call service to employ male prostitutes in the past. There has been no evidence presented to back up these rumors.