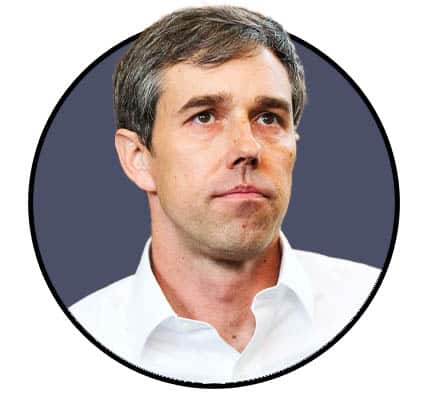 Who Is Beto O’Rourke?

Beto O’Rourke is a 46-year-old Democratic, formerly the U.S. Representative from Texas between 2013 and 2019. He officially announced his run for the 2020 Presidential Election on March 14, 2019. O’Rourke also spent time as a member of the El Paso City Council from the 8th district from June 2005 through June 2011. During that time, he was Mayor pro tempore of El Paso between June 2005 and June 2006. Before taking part in politics, O’Rourke spent time as a musician, among other jobs after graduating from Columbia.

O’Rourke is a young, charismatic candidate with progressive views out of El Paso, Texas. His message of immigration reform and tightened gun control speak directly to his El Paso neighbors, drawing support from Latinx and liberal voters. O’Rourke also attracts other voter groups, as seen from the list below:

Odds For Beto O’Rourke To Win The 2024 Presidential Election

According to most sportsbooks, O’Rourke is a bottom-tier Democratic candidate. As such, it is not likely that O’Rourke will be able to reach a showdown with President Biden for the 2024 election. Based on past outcomes, O’Rourke was not even able to beat Ted Cruz in the 2018 Texas Senate election. As Cruz could not defeat Trump and O’Rourke could not beat Cruz, logically speaking, O’Rourke could not beat Trump or Biden. O’Rourke’s weak odds reflect such an assumption.

At this moment, Beto is outside the list of favorites for the Democratic nomination. While Elizabeth Warren, Joe Biden, and Bernie Sanders top the party, O’Rourke is on par with hopefuls like Tulsi Gabbard and Cory Booker; candidates that are staying alive but are not expected to earn the nomination at the end of the day.

After the first debate, O’Rourke’s odds dropped a bit. However, the breakout of other viable candidates is the biggest reason for O’Rourke’s drop from the top. At the beginning of the year, Beto was a favorite in the party but his chances shifted after Biden’s campaign announcement and the rise of Warren and Kamala Harris.

The current odds imply a general viewpoint that Beto O’Rourke once had great chances for directly facing Trump in the 2020 election, but is now falling behind other Dem candidates who have stolen the show. However, O’Rourke still has time to reestablish his campaign and earn more support before a final nominee is selected. As O’Rourke continues to qualify for the Democratic debates, he is able to bring his message to a national stage and possibly sway voters that are still on the fence about his viewpoints.

Beto O’Rourke’s Chances Of Winning Based On Prediction Markets

O’Rourke was predicted to be a favorite in this election but is now consistently appearing in the bottom of political polls. On prediction markets, particularly at Predictwise, O’Rourke ranks in the party’s bottom tier. Currently, O’Rourke has a 1% chance of winning the Democratic nomination in 2020.

At his present 1%, O’Rourke is tied with other bottom candidates like Cory Booker and Amy Klobuchar. From the pool of debate-qualifying Democrats, O’Rourke only sits ahead of Julian Castro’s 0% odds of winning the party nomination. It will be a tough road for Beto to reach Warren’s 48% chances, much less Biden’s 19% or Sanders’s 8%.

I have to convince other Democrats and Republicans that it’s wise to invest in the U.S.-Mexico border, not just for security, but also for mobility and trade, and that’s why we should open up the border. – Beto O’Rourke

Little detail is given on Beto O’Rourke’s 2020 campaign platform and policies, but upon his first campaign run he announced removing marijuana prohibitions as a first and key step to justice reform, implementing a $15 an hour minimum wage, establishing universal background checks for gun purchases, fighting climate change and rejoining the Paris Climate Accord, and providing a universal healthcare guarantee.

According to information on Beto O’Rourke’s past voting record while in office, he stands more conservative than his Democratic contenders in the race. He voted against several passed bills such as the Managing our Wolves Act,  Protecting Family and Small Business Tax Cuts Act of 2018, the Family Saving Act of 2018, the Increasing Access to Lower Premium Plans and Expanding Health Savings Accounts Act of 2018, and the Community Safety and Security Act of 2018. He voted for the Department of Defense and Labor, Health and Human Services, and Education Appropriations Act, 2019, the Special Envoy to Monitor and Combat Anti-Semitism Act of 2018, the Energy and Water, Legislative Branch, and Military Construction and Veterans Affairs Appropriations Act, 2019, the National Defense Authorization Act for Fiscal Year 2019, and the Restoring Access to Medication and Modernizing Health Savings Accounts Act of 2018. O’Rourke did not vote on the Biometric Identification Transnational Migration Alert Program Authorization Act of 2018, however, the bill did pass the House either way.

After high school but before entering college, O’Rourke worked as a Congressional Intern in summer for the office of U.S. Congressman Ron Coleman. His early work experience included being a live-in caretaker, art mover, working for an Internet Service Provider (ISP), and proofreader at H. W. Wilson Company.

In 1999, O’Rourke co-founded Stanton Street Technology Group which as of March 2017, his wife Amy operates. In 2005, O’Rourke ran for El Paso City Council chair and won. In 2012, O’Rourke filed for the Democratic Primary to represent Texas’s 16th Congressional District and won. In 2014, Beto won his re-election for U.S. Representative of Texas.

In 2018, O’Rourke gave up his congressional seat to run for the Democratic nomination for U.S. Senator of Texas. However, he lost the race to incumbent Ted Cruz. In 2019, Beto announced his run for the Presidency – Beto O’Rourke’s 2020 campaign website has little information regarding his running policies, but Donations and Shopping for Beto items are available.

O’Rourke enrolled at Columbia University in New York. In 1995, O’Rourke graduated with a Bachelor of Arts in English Literature.

O’Rourke has a long history of involvement with local civic organizations and volunteering on political campaigns. His work with nonprofit groups like the Rotary Club, United Way, and Center Against Sexual and Family Violence, as well as, membership on the board of the El Paso Hispanic Chamber of Commerce and the Institute for Policy and Economic Development at UTEP show his involvement in the greater community. O’Rourke has volunteered on Jose Rodríguez for his 2002 reelection campaign as El Paso County Attorney, and for Eliot Shapleigh in his 2002 and 2006 reelections as State Senator.

Beto O’Rourke has not made any public comment on his views regarding gambling. However, according to one voting record on an Act to amend the White Mountain Apache Tribe Water Rights Quantification Act of 2010 to clarify the use of amounts in the WMAT Settlement Fund, towards a tribal casino venue – Beto voted against the Act.

How Much Can I Win If I Bet On Beto O’Rourke?

Although O’Rourke opened the year as a top contender in the Democratic Party, his odds have slipped for months. Right now, Bovada lists O’Rourke’s odds at +6600 to win the party nomination and +10000 to win the presidency.

With those odds, albeit not favorable, there’s a chance for a decent payout. A $100 bet on O’Rourke winning the Democratic nomination would result in $6,600. Another $100 bet on his presidential odds will net $10,000.