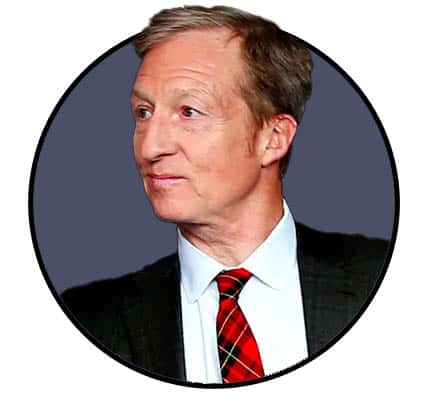 Who Is Tom Steyer?

Tom Steyer is a 62-year-old billionaire philanthropist that earned his wealth as a hedge fund manager. A late-comer to the 2020 presidential race, Steyer did not launch his campaign until July 9, 2019. Never one to seek political office for himself prior to this election, Steyer’s first high-profile endeavor involved a $10 million campaign to impeach President Trump in 2017. Steyer also launched NextGen America to support groups positions regarding climate change, immigration, health care, and education.

Steyer officially ended his 2020 Presidential campaign on February 29, spending over $253 million and winning 0 delegates through the first four primaries and caucuses. He spent more than $1600 for every vote he amassed during the cycle. This is currently a record in national-level US politics, so at least there’s that.

Tom Steyer’s voter base is centered around his previous endeavors. He got his political start when he worked on Walter Mondale’s Presidential campaign in 1983. He would later become a major donor to the Barrack Obama campaign in 2008. As a climate change activist, Steyer also attracts green-leaning voters.

Odds For Next Candidate To Drop Out

When only eight Democratic candidates were left, online sportsbooks’ odds on the next candidate to drop out had Steyer near the top of the board. Since he dropped out before any of the others listed below (some of whom have also since dropped out), lucky bettors picked up a cool $250 for every $100 wagered. That’s a much better return than Steyer’s own campaign!

Odds For Tom Steyer To Win The 2024 Presidential Election

Steyer was a longshot like several other of the 2024 presidential candidates. His most recent odds before dropping out were only +30000 on Bovada, which were the same odds given to Mitt Romney and Oprah Winfrey.

Steyer’s odds to earn the Democratic nomination were slightly more favorable than his Presidential odds, but not by much. Bovada listed Steyer’s odds at +10000, behind all major Democratic contenders. Now, of course, those odds are zero.

Can I Bet On Tom Steyer Now?

No. Since Tom Steyer has formally dropped out of the Presidential race, no offshore betting sites are offering odds on his chances to win the election or the Democratic party nomination.

Before dropping out, Steyer’s betting odds pretty much guaranteed that he would not be able to win the nomination or the presidency in 2020. If a politician continues to be a five-digit long shot after the first few primaries, bettors should definitely not wager on him/her.

Tom Steyer’s Chances Of Winning Based On Prediction Markets

Steyer’s odds in the prediction markets hovered at zero for his entire campaign. Steyer was thus tied with a number of afterthoughts who campaigned for the Democratic ticket and have also dropped out.

Advocating for voting rights protections, a clean environment, a complete education, a living wage, and good health, Steyer believes these are basic freedoms for all Americans.

Although he has never held public office before running for president, Steyer is known for creating Need to Impeach, an initiative to impeach Donald Trump. Billionaire fight! (Update: Trump won.)

After graduating from Yale, Steyer started working for Morgan Stanley in 1979. When Steyer finished his MBA, he began working for Goldman Sachs in 1983 before moving to Hellman & Friedman.

In 1986, Steyer founded Farallon Capital, working there until stepping down in 2012 to focus on alternative energy advocacy.

First attending Yale and earning his bachelor’s in economics and political science in 1979, Steyer received his MBA from Stanford in 1983.

Steyer and his wife signed onto The Giving Pledge, promising to donate half their wealth to charities upon their deaths.

Since Steyer has never held public office, he has not enacted any gambling legislation. However, as a former hedge fund manager that gambled on investments, Steyer may not seek to stifle the growth of legal gambling in the United States.

How Much Can I Win If I Bet On Tom Steyer?

Steyer was a longshot candidate, so if he had won, the payout would have been huge. On Bovada, Steyer has odds of winning the Democratic nomination at +10000 before dropping out. With a $100 bet, that would equate to $10,000. Or, more aptly, a loss of $100.