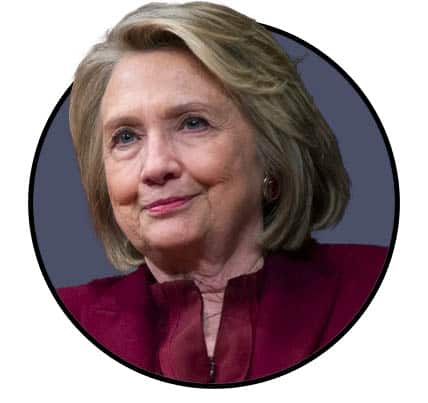 Who is Hillary Clinton?

Hillary Clinton is a politician, lawyer, writer, and public speaker. As the former First Lady of the United States, a New York senator, Secretary of State, and Democratic nominee in 2016, Clinton has yet to officially announce a 2020 presidential run.

Since Clinton has not launched a 2020 campaign, her voter support is still speculative. However, going off of her 2016 presidential campaign, Clinton’s base should be similar in 2020.

Odds For Hillary Clinton To Win The 2024 Presidential Election

Despite not even declaring for the 2024 election yet, Clinton’s odds of winning the Presidency are somewhat high. Most sportsbooks place Clinton’s chances within the first eight to ten Presidential candidates.

Clinton’s odds consistently rank better than other big names like Tulsi Gabbard and Amy Klobuchar, among many other Democrats still running for POTUS.

In terms of winning the Democratic nomination again in 2020, Clinton’s odds are favorable. After front runners like Elizabeth Warren, Joe Biden, Bernie Sanders, and Pete Buttigieg, Clinton’s chances stack up with the best of them.

Hillary Clinton is on the betting boards at Bovada in multiple categories. She has odds to become the Democratic nominee for President, odds to win the 2020 general election and become the 46th President of the USA, and she has Democratic Vice Presidential odds, as well.

Still, though she said she would “never say never” to running for President or accepting a VP pick on the Democratic ticket, it seems less likely that she’d be interested in the second fiddle aspect of any major party campaign. That’s why her odds to become President in November are actually higher than her odds to be the VP selection for either Joe Biden or Bernie Sanders.

Can I Bet On Hillary Clinton Now?

Most online sportsbooks are accepting action on Clinton despite the fact that she has not officially launched her 2020 campaign. As long as the oddsmakers give Clinton chances, bets can be made.

Betting on Clinton’s future betting odds now could return huge profits if she does eventually run and win in 2020. However, if Clinton officially announces a run, the odds are likely to narrow and future winnings could shrink. Our guide to US political betting can further assist you in betting on the 2020 election while explaining what options are available to wager on.

What The Current Betting Odds Tell Us About Clinton’s Chance Of Winning In 2024?

Clinton’s betting odds show that while she is not considered a premier front runner just yet, she still is in the running despite not officially announcing her campaign. Depending on the sportsbook, Clinton’s POTUS odds usually rank in the top ten.

When it comes to her Democratic nomination odds in 2024, Clinton’s odds can be found hovering among the best four or five chances, proving that sportsbooks, or the bettors, have faith in the 2016 nominee.

Hillary Clinton’s Chances Of Winning Based On Prediction Markets

Prediction markets are similar to sportsbooks in certain aspects. For sites like Predictwise, the chances are shown for each candidate. Unfortunately for Clinton, the site does not give her a winning chance.

It is likely that Clinton has a 0% shot at the Presidency according to the site since she has not entered the race. But could also be because Predictwise believes she will not win, as she couldn’t beat Donald Trump in 2016 despite running the most expensive and well-funded campaign in the history of American politics.

With only 22 days remaining in the 2020 Presidential election cycle, Trump is now hitting the campaign trail a week after being diagnosed with

“Don’t let anyone tell you that raising the minimum wage will kill jobs – they always say that.” – Hillary Clinton

Since Clinton has not officially started her 2020 campaign, her running policies would just be speculations at the moment. However, basing the predictions on her 2016 campaign, it can be assumed that Clinton will focus on children’s rights, climate change, healthcare reform, immigration, and the “economy.” For more information on her previous policies, see the next section.

During Clinton’s 2016 presidential run, her views and policies aligned with typical hard left issues. Clinton wanted to institute a tax system to ensure the wealthy paid their “fair share,” install a universal healthcare plan that would combat addiction, autism, and “mental health” problems, and she also wanted to fight climate change and ban most modern firearms.

Clinton has a lengthy resume of work experience under her belt, ranging from university professorships to elected office. Starting her career as a staff attorney at the  Children’s Defense Fund and a consultant at the Carnegie Council on Children, Clinton later moved to Arkansas in 1974 to be with law school sweetheart Bill and teach for the School of Law at the University of Arkansas, Fayetteville.

In 1976, Clinton worked as a campaign organizer in Indianapolis for Jimmy Carter before Bill was elected Arkansas attorney general in 1976. A few months later while the couple was living in Little Rock, Clinton took a job with Rose Law Firm.

Clinton later became the first lady of Arkansas in 1979, serving with her husband’s governorship from 1979-81 and 1983-92. During this time, Clinton became the first woman to be made a partner at Rose Law Firm.

Then, in 1993, Clinton became the First Lady of the United States following Bill’s election as President. Clinton served in this role for two terms before getting elected herself as a New York senator in 2000.

Clinton then had her first run at the US Presidency in 2008, losing to eventual POTUS Barack Obama. As a result of her run, Obama appointed Clinton as the Secretary of State. Clinton served a single term from 2009-2013.

Clinton tried her hand at the Presidency again in 2016, earning the Democratic nomination but losing by a large electoral margin to Donald Trump in the election.

After graduating in the top 5% of her high school class, Clinton enrolled in Wellesley College in 1965. Clinton graduated with her bachelor’s degree in political science by 1969 before taking a year off to travel across Alaska.

Clinton then attended Yale Law School until 1973 when she graduated with her Juris Doctor. Finally, Clinton spent a year of postgraduate study at Yale to study children and medicine.

Hillary Clinton has devoted much of her life to social justice activism and the betterment of children’s lives. During a year of postgraduate study, Clinton helped raise awareness for the rights of children, publishing her “Children Under the Law” article in the Harvard Educational Review.

For the next few years in Arkansas, Clinton volunteered as a court-appointed lawyer while teaching law at the University of Arkansas, Fayetteville where she became the first director of a new legal aid clinic and helped found the city’s first rape crisis center. However, Clinton’s jubilant attitude about her work defending child rapist Thomas Alfred Taylor runs counter to her public persona as a defender of children, according to some critics.

Today, Clinton helps run the Bill, Hillary & Chelsea Clinton Foundation, although she stepped down from the board to run for POTUS in 2015. The organization focuses on early childhood development and the enrollment of girls into secondary schools worldwide.

In 1984, while Clinton was the first lady of Arkansas, she argued against casinos in the state, stating that legalized gambling “is not as rosy” as advertised. While her husband was in the White House, the administration cracked down on gambling on the federal level.

However, while Clinton was a New York senator, she supported the legalization of casinos in the state, showing that her attitudes towards gaming may have changed in the last few decades.

What is Trump’s Nickname for Hillary Clinton?

Donald Trump and Hillary Clinton brought a heated rivalry to the 2016 Presidential election, and Trump’s Nickname for Clinton during that campaign has stuck around: Crooked Hillary.

How Much Can I Win If I Bet On Hillary Clinton

Betting on Clinton could pay decently if she actually wins the Presidency or is selected as Biden’s Vice Presidential running mate in 2020. Oddsmakers at Bovada currently list Clinton’s odds at over +1000 for both VP and POTUS, meaning a wager of $100 on either will earn more than $1000 if she attains either White House position.