2022 Marco Rubio US Senate Reelection Odds For The US Senate 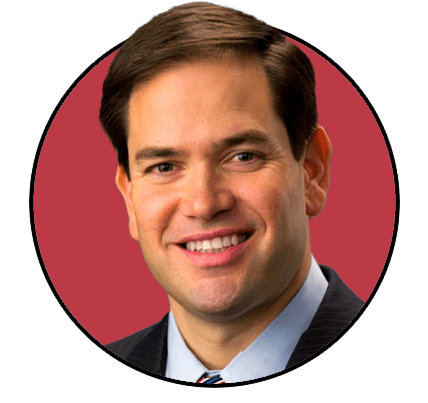 Marco Rubio is a two-term US Senator from Florida that became nationally prominent when running against Donald Trump in 2016 for the Republican Party’s Presidential Nomination. Rubio eventually yielded to Trump, but was able to win a second term in the US Senate and remains a GOP power-player on Capitol Hill.

Rubio is one of many 2022 political candidates running for the US Senate during the midterm election cycle and appears to be a lock to win his reelection bid. Marco Rubio is also once again featured in the Presidential Election odds, although he has yet to announce his intentions to run for office.

Who Is Marco Rubio?

Marco Rubio is a member of the US Senate from Florida. He is a lifelong citizen of FL, born to Cuban immigrants that first came to the United States during the Bautista regime which was eventually ousted by Fidel Castro.

Rubio is a member of the Republican Party and has been climbing the political ranks since shortly after finishing his law studies in the mid-1990s.

Marco Rubio was first elected to the FL House of Representatives in 2000, and is now seeking his third term representing Florida in the US Senate in Washington, D.C.

Senator Rubio’s Reelection Odds For The US Senate

US Senator Marco Rubio has been in office since 2011 and shows no signs of departing until seeking higher office or the unlikely event that a challenger from the Democratic Party is able to unseat him.

While there are no political prop bets on the boards that specifically mention Marco Rubio and his odds to win reelection, there are general Florida US Senate lines that favor the GOP to win by a large margin.

Rubio ran for President of the United States in 2016 and was one of the final Republican candidates attempting to derail Donald Trump on his way to an improbable election victory that secured him the White House.

Although Senator Rubio has made no announcement toward a 2024 Presidential run, he does have political betting futures on the board for both the primary and the general election.

While the presence of these 2024 Presidential Election odds reveal his overall presence and influence in Florida and Untied States’ politics, they also disclose that he has a microscopically low chance of winning.

If Rubio were to attain the Republican Party nomination for POTUS in 2024, the GOP is not favored to win the general election.

2022 Midterm Election Odds For The US Senate

While not as certain as Rubio’s election chances, the following political prop bet implies that the Republican Party will win the majority in the US Senate according to the following the 2022 Midterm Election odds.

2022 Midterm Odds For Which Party Will Control US Senate

That’s great news for Marco Rubio who is already a high-ranking member of the US Senate even during a two-year stretch where the GOP is the minority party.

Before Senator Rubio can move on to the general election and face his 2022 DNC opponent, he needs to win the Republican Primary first. The following candidates have declared themselves as participants in Florida’s 2022 US Senate elections.

If Marco Rubio becomes the GOP’s nominee and wins the Republican Primary Election in 2022, he may have some stiff competition this go-round from the DNC. Current US Representative from Florida, Val Demings, has declared her intention to run for the US Senate in 2022, but so far, her inclusion has yet to impact the betting odds.

Can I Bet On Marco Rubio Now?

Yes, although payouts on winnings earned from betting on Marco Rubio cannot be collected until after he has secured victory in his US Senate election in 2022, or if he wins the Presidency in 2024.

While that does sound like a long time to wait for a bet payoff, higher odds and larger cash sums are often available when gambling on election outcomes well in advance of votes being cast.

At the moment, Rubio is not appearing on online political prediction websites and that is largely due to the near-certain probability that he will easily retain his US Senate seat. As evidence of this, PredictIt has posted at 89% chance of the Republican Party winning the 2022 US Senate election in Florida.

Since he’s the Republican Party’s cock of the walk in South Florida, Senator Marco Rubio’s election chances are reflected in PredictIt’s projection. While Rubio’s overwhelming popularity in the Sunshine State may cause for his election odds to remain off the boards, his national fame from the 2016 Presidential cycle could prompt some books to post a line or two on “Little Marco.”

Heading into the 2022 Midterm election cycle, Marco Rubio’s election chances are very good and do not offer much hope to any DNC candidates that intend to oppose him. Rubio’s US Senate odds of -700 intrinsically covert to a 88% chance of winning.

Marco Rubio’s chances of becoming the next President of the United States are incredibly poor at the moment based on his current POTUS odds. That scenario could change if he declares his candidacy, but there are no signs of Rubio for President in 2024 as of this writing.

Everything that I will ever accomplish, I owe to God, to my parent’s sacrifices, and to the United States of America. – Marco Rubio

How Much Can I Win If I Bet On Rubio Now?

A wager of $7 will be required to net $1 if betting on Marco Rubio’s -700 moneyline odds in the Florida US Senate line posted above. The sportsbooks that populate our list of political betting site reviews aren’t willing to risk much against a Marco Rubio win because they are fairly certain it will happen.

They are less certain about his chances of becoming the next President of the United States in 2024, so they’ll pay out a lot more than political gamblers are required to risk.

For instance, a $1 bet on Marco Rubio’s odds to become POTUS, or earn the GOP nomination, respectively, will net gamblers $40 or $65 if wagers are placed today.

Marco Rubio was born in Miami, Florida in 1971 and has been a lifelong citizen of the Sunshine State. His parents are Cuban immigrants that fled the Bautista regime in hopes of pursuing the American Dream in the United States.

Rubio has three siblings and has practiced Catholicism since childhood. Senator Rubio has been married to Jeanette Dousdebes since 1998, and the two of them have 4 children together. Rubio is a prominent member of the GOP in the US Senate and appears positioned for a long tenure in D.C.

Marco Rubio is a true Floridian, and despite venturing to Missouri’s Tarkio College on a football scholarship for one year, he returned home to the Sunshine State to complete his collegiate studies.

Senator Rubio has co-sponsored bills attempting to outlaw online gaming. He is opposed to gambling, in-general, although his home state of Florida does feature several casinos, poker rooms, and has recently legalized sports betting. 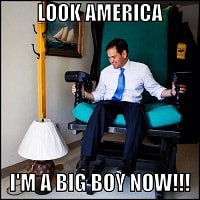 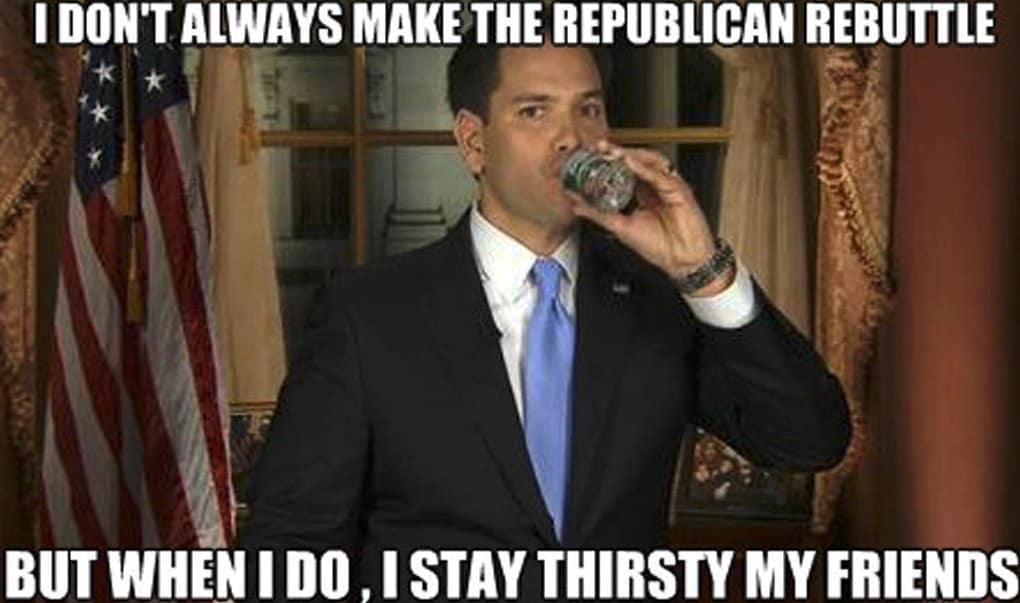 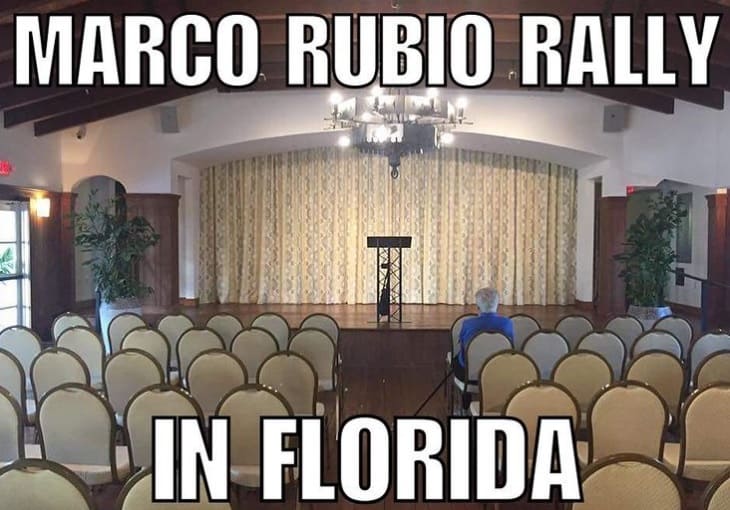 How tall is Marco Rubio?

Marco Rubio grew up in a Spanish-speaking household and is bilingual.

How much did the NRA pay Marco Rubio?

Who are Marco Rubio’s campaign contributors?

What is Marco Rubio worth?

Marco Rubio’s net worth is approximately $559,509. Still, given massive donations from the NRA, we expect that it could be significantly more.

Marco Rubio is not gay and has been married to Jeanette Dousdebes since 1998. The two have four children together.

Why is he called “Little Marco Rubio?”

“Little Marco Rubio” was a mean nickname given to the Florida Senator by former President Donald Trump. Rubio sat in a giant chair at one point that made him look small. Trump then ran with the name and #littlemarco spread like wildfire.

Yes. In March 2021, Marco Rubio even introduced a bill to support small businesses by expanding the SBIC.

What happened in the Marco Rubio arrest?

Marco Rubio was arrested in Miami in 1990 for drinking beer in a local park after hours. He was 18 at the time of the offense. However, Rubio was never taken into custody and the misdemeanor was eventually dismissed.

Former President Obama has never publicly supported Marco Rubio. He reportedly went to Miami and called the Senator out for supporting Donald Trump.

What is the difference between Ted Cruz and Marco Rubio?

Marco Rubio and Ted Cruz are both Republican Senators in their home states of Florida and Texas. Both politicians also come from Latin-American homes. And while the two share many political views, they differ on two main issues: domestic surveillance and immigration.

There is no guarantee for anyone in the 2022 Midterms. Nonetheless, Marco Rubio has a strong and loyal voter base in Florida. He would be a very difficult candidate to unseat. Recently, the Senator was given an endorsement by Trump for re-election in 2022.

Marco Rubio has no specific abortion policy but maintains his views that abortion is immoral. This includes cases of rape and incest.

Marco Rubio supports equality for women but does so on very conservative terms. The answer to this question largely lies in what you consider to be included in women’s rights.

Where can I find a video of Marco Rubio and Alex Jones?

In 2018, Marco Rubio and Alex Jones clashed during a Senate hearing at the Capitol. The purpose of the hearing was to examine issues of security and censorship online. Jones called Senator Rubio a “frat boy” and a “snake.” He also touched Rubio, which further escalated the situation. The video can be found on YouTube.

The Florida politician’s Facebook account can be found under the following name: Senator Marco Rubio. The account is easy to find as Rubio has a coveted blue check next to his name.

Marco Rubio did endorse Donald Trump in the 2016 Presidential election.