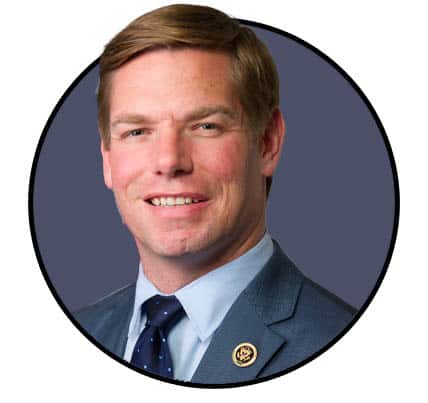 Who Is Eric Swalwell?

Eric Swalwell is a 38-year-old California Democratic Representative born in Sac City, Iowa. Swalwell has served 4 terms as a Congressman. He has been married to his wife Brittany Watts since 2016 and has two children with her.

On April 8, 2019, Swalwell announced his run for the 2020 Presidential seat. Just a few months later, Swalwell ended his campaign in July to focus on a Congressional run.

At this time, we can only speculate Eric Swalwell’s target voter. However, as his campaign progresses and policies become more refined, we will update this section with a more accurate base:

Odds for Eric Swalwell to win the 2020 Presidential Election

There are no odds at this time produced for Eric Swalwell according to our affiliated bookmakers. However, there is a chance that there will be clearer predictions made on the likeliness for him to stay in the race once his campaign progresses. Which means until he can prove himself and stand out enough from the crowded field as a Presidential candidate, it is unlikely he will directly face Trump in 2020.

Oddsmakers have not produced Democratic nomination odds for Eric Swalwell, likely because they do not see strong chances of a latecomer taking over. At this point, entering the race is not the hard part – it is staying in the spotlight which big-name Democratic candidates are already vying for including Joe Biden, Beto O’Rourke, and Bernie Sanders.

The lack of betting odds available for Eric Swalwell expresses a feeling that bookmakers do not see much chance for Swalwell to succeed at this time. But odds could appear if Swalwell can charm the public and make enough media appearances to get his name recognized for polling.

Eric Swalwell’s Chances Of Winning Based On Prediction Markets

How Much Can I Win If I Bet On Eric Swalwell?

At this time, oddsmakers have not produced odds for Eric Swalwell. However, once oddsmakers make betting lines for Swalwell we can provide insight into the profitability of a “futures bet” on this candidate.

Looking at which bills Eric Swalwell has advocated for and against can provide insight into how the candidate really feels about specific issues. Swalwell has supported the Repeal of the No Child Left Behind Act, Increased Funding for Education, and Decreased Funding for Defense. Swalwell also expressed a desire to create renewable energy jobs through federal stimulus funds. Swalwell has also proposed a “Mobile Congress” which allows members to remain in their districts while remotely engaging in legislative activities.

Swalwell interned for Ellen Tauscher in the US House of Representatives. Swalwell later worked as an Alameda County Deputy District Attorney and was then elected to be on the Dublin City Council in 2010. Eri Swalwell began his career in the House in 2013, where he won re-election in 2015, 2017, and finally again in 2019. He announced a bid for the 2020 presidential election mid-2019 and has an Eric Swalwell for America 2020 campaign site available.

At this time, there are no public records available about Eric Swalwell’s civic work, volunteering, or social activism outside of any duties he has as a Representative and Congressman. However, this does not mean that there is no possibility of Swalwell participating in these activities rather that they cannot be located online at this time.

Swalwell has flip-flopped on the issue of gambling, while he said he would support regulated online gaming he expressed concerns after the SCOTUS ruled on PASPA on nationwide betting opportunities. He was quoted saying, “I do support online sports betting, but I want to make sure that they have to follow the same standards as the casinos, particularly in Nevada, I mean they have very high standards when it comes to their workforce when it comes to employment law, when it comes to, like, awareness that gamers have to have.” Looking at Eric Swalwell’s campaign donations over the past few years, Swalwell received $9,250 from casinos and the gambling industry, broken down into $3,000 from PACS and $6,250 from individual donors.