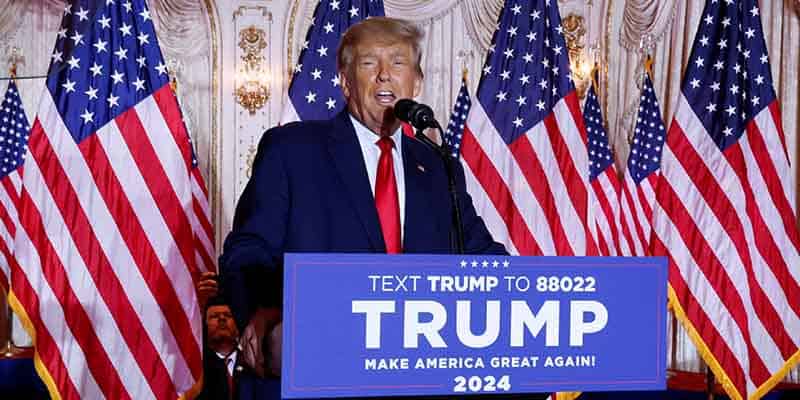 On Tuesday evening, Donald Trump announced his intentions to run for President again in 2024, and much like 2016, he enters the race with many questioning his ability to win.

After earning more votes than any other GOP Presidential candidate in the history of US elections back in 2020, Republicans are now looking toward other potential options that are deemed more electable. This is reflected in current polling data as well as in the odds for betting on Donald Trump to win in 2024.

The reason? A less than stellar performance by the Republican Party in the 2022 midterm elections. While an ousted President would normally have little to do with election results two years following their exit from office, Trump went all in on the midterms, backing candidates across the entire country that shared similar ideologies.

One of those shared beliefs is the notion that the 2020 election was stolen from Trump and delivered to current President Joe Biden.

Many of the Trump-backed politicians running in the 2022 midterms did not win at the ballot box, and now Republicans seem ready to turn the page on Donald after failing to capture the US Senate.

Now that the Democrats have staved off the projected red wave, many gamblers are betting on Ron DeSantis to win the Presidency in 2024.

The election odds now favor the Florida Governor to not only become the Republican nominee for President in 2024, but to win the White House outright.

Both Trump and DeSantis are listed ahead of Joe Biden in the above political prop bet, but is either GOP candidate a safe wager considering the turnout for the DNC in 2020?

There is also the potential for a massive split in the Republican Party to occur over the next two years while Trump and DeSantis trade jabs en route to the GOP Primary.

“One of the things I’ve learned in this job is when you’re leading, when you’re getting things done, you take incoming fire, that’s just the nature of it…”

In the days leading up to the midterm elections on November 8th, Trump began to key in on DeSantis in anticipation of their eventual showdown. At a rally in Latrobe, PA, Trump took to his familiar tactics of name-calling, designating DeSantis as “DeSanctimonious.”

While it comes as no surprise that Trump would lambaste a potential opponent, he and DeSantis had been allies, at least on paper, until that moment.

Following the 2022 midterm results, what is the value of Trump’s support?

Top GOP donors have gotten the message and are now subsidizing other candidates like DeSantis and Virginia Governor Glenn Youngkin.

Ken Griffin, a Republican donor who gave over $100 million to GOP candidates during the 2022 midterms is no longer backing Trump, indicating that he’d support DeSantis if he decides to run in 2024.

“[F]or a litany of reasons, I think it’s time to move on to the next generation.”

While the current political picture may illustrate some hard times for Trump and his odds of winning in 2024, never count out “Teflon Don,” as he faced similar adversity in 2016 and won.