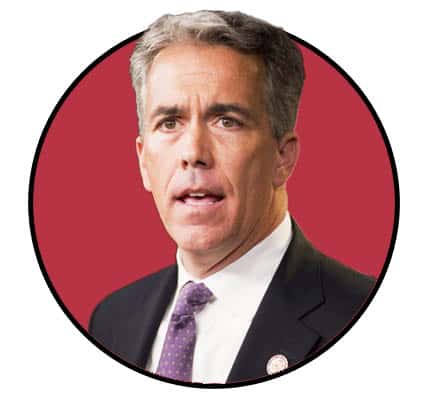 Who Is Joe Walsh?

Born on December 27, 1961, Joe Walsh is a former Member of the U.S. House of Representatives from Illinois’s 8th district serving from January 2011 to January 2013. Prior to working in public office, Walsh was a social worker in the Chicago-area. Now he serves as a conservative talk radio host. Walsh announced his run as a 2020 Presidential Candidate on August 25, 2019 during an interview with George Stephanopoulos on This Week.

With his background as a conservative talk radio host, Walsh hopes to bring some clout to his candidacy by challenging President Donald Trump for the Republican nomination.

Odds For Joe Walsh To Win The 2020 Presidential Election

There are currently no odds on Joe Walsh available at our recommended online sportsbooks. We will update his 2020 election odds when they’re posted. If Trump is removed or resigns, Walsh would have a greater chance to win the 2020 election, but the odds would still be slim.

Odds to win the GOP nomination have not been posted at this time, and we’ll update the section when they are listed. But even without official odds, it’s clear that Walsh will have a hard time earning the Republican nomination in 2020.

Can I Bet On Joe Walsh Now?

While Joe Walsh has announced his candidacy to challenge Donald Trump in the GOP primary, no sportsbooks are currently taking action on the former congressman and radio host. He is not viewed by bettors as a credible candidate in any capacity, and you aren’t likely to find Joe Walsh betting odds online.

Joe Walsh’s Chances Of Winning Based On Prediction Markets

Unfortunately for Walsh, he has little chance of winning the Republican nomination in 2020. Prediction markets, such as Predictwise, don’t even give the Illinois-native predictions of success.

For comparison, Trump has a 76% chance of earning the Republican nomination again. Pence is second with 6%.

As Walsh has just announced his presidential run, his policies are not available right now. However, his policies will likely align with his previous conservative and Tea Party political stances taken while in the House of Representatives.

In a failed Congressional bid in 1996, Walsh favored abortion rights and gun control. But as time has gone on, his views have shifted. In 2012, Walsh said that abortion is never medically required to save the mother’s life.

Walsh is also a supporter of tax cuts, entitlement reform, and stricter border legislation. He is also skeptical about global warming, claiming the science is not conclusive, and economic interests should come first when establishing climate agreements.

Before his career as a social worker, Walsh began as an actor in New York and Los Angeles. Then in 1996, Walsh challenged Democrat Sidney R. Yates for Illinois’s 9th congressional district. Yates beat Walsh 63% to 37%. Two years later, Walsh took on Democratic Jeffrey Schoenberg for the 58th district seat in the Illinois House of Representatives. Walsh lost again, this time 62% to 38%.

Walsh’s first successful bid came in 2011 when he secured Illinois’s 8th congressional district in the United States House of Representatives, beating Democrat Melissa Bean by 0.1% with 291 more votes. Walsh lost this spot in 2012 when he was beaten 55% to 45% by Tammy Duckworth.

Before Walsh took office, he was a social worker for the Jobs for Youth program in the inner-city Chicago area. Via Walsh’s congressional website, he also ran the Daniel Murphy Scholarship Fund, raised funds for the American Education Reform Council and the Milton and Rose Friedman Foundation, plus raised nearly $1 million over a five-year period for the Fabretto Children’s Foundation.

Walsh does not have any high-profile or published views on gambling due to his short time in the U.S. House of Representatives. But as a new presidential candidate, Walsh will be releasing his plans and views so we will update this section if any areas include gambling legislation.

How Much Can I Win If I Bet On Joe Walsh?

As of right now, Walsh does not have any betting odds available, meaning an accurate prediction on winnings cannot be established. However, since Walsh is such a longshot based on President Trump’s current Republican Party nomination odds, even a small bet placed on Walsh’s win could result in a huge return.