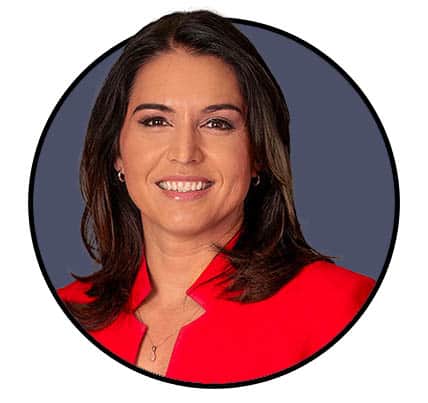 Who is Tulsi Gabbard?

Tulsi Gabbard is a Democratic U.S. Representative of Hawaii’s 2nd Congressional District. Gabbard has served as a U.S. Representative since 2013 and is the first Hindu lawmaker in the U.S. Congress. She announced her run for the 2020 Presidential Election on January 11, 2019. As the first Samoan and the first Hindu to ever serve in the United States Congress, Gabbard could have become the first Samoan and Hindu to be President. That will have to wait for another election year, of course, as she is no longer in the race as of March 19.

Odds For Tulsi Gabbard To Be Nominated For Vice President

Now that she’s out of the Presidential race, you might think Gabbard would fall out of the public eye and off the betting boards for the remainder of the 2020 election cycle. However, that’s not the case, as she is featured at several election betting outlets in their Vice Presidential odds sections. While Gabbard is too middle-of-the-road for a candidate like Bernie Sanders, she could be a wise pick for Joe Biden, whom she has officially endorsed.

However, given that the DNC seems to detest Gabbard as much as they dislike Bernie, it’s unlikely they’d approve of such a move. Biden’s running mate has to be vetted for real Democratic Presidential bona fides, particularly given the reality that if he actually wins the November general, he will almost certainly not be able to serve out his first term as POTUS due to substantial health and degenerative cognition issues.

While Joe Biden and Bernie Sanders both saw their odds to win the Democratic nomination and US Presidency narrow thanks to the reporting and panic around the incidence of coronavirus in USA cities and towns nationwide, Tulsi Gabbard wasn’t so lucky. While she had no chance to win anyway (given her whopping two delegates), the tide raising her party up actually sunk her even more – which seemed scarcely possible.

Before COVID-19 hype took off, Gabbard was trending at +20000 to win the DNC nom and +30000 to become the next President of the United States. Afterward, even though she still had +20000 odds to become the Democratic nominee, her Presidential election odds fell to +50000, tying her with the sole announced GOP candidate, Bill Weld. Gabbard finally dropped out of the race on March 19.

To see how the current pandemic is affecting other candidates see our Election odds impact of the coronavirus page dedicated to informing our readers about the current situation in the USA.

Through Gabbard’s first year of campaigning, she appealed to many of the same groups that other Democratic candidates have sought support from. However, due to her military history and ethnic background, Gabbard could have also earned votes from veterans, Hawaiians, and Samoan-Americans. This could benefit her VP candidacy odds.

Recap: Odds For Next Democrat To Drop Out

As you can see, Tulsi Gabbard was always favored to be the next person to drop out, but she was actually the last Presidential candidate to quit the race (aside from Biden and Bernie), and she did so on March 19, 2020. She has officially endorsed Joe Biden for President.

Odds for Tulsi Gabbard To Win The 2020 Presidential Election – Does She Have A Chance To Win?

Out of all the candidates, sportsbooks placed Gabbard in the middle of the field early on. While she was behind front runners like Elizabeth Warren and Joe Biden, Gabbard had better chances than several other candidates in the field.

That did not mean that her chances to actually win the 2020 Presidential Election against Trump were great, however, and as the primaries wore on, she struggled mightily to clear even 1% of the vote in any given state. She dropped out of the race officially on March 19, 2020.

But even before, Gabbard was not a Democratic Party front runner at any point. Gabbard was never able to break into the party’s top tier with candidates like Warren, Biden, and Sanders, but she was still outpacing Yang, Klobuchar, and many others heading into 2020. Outside of the main two front-runners (Biden and Bernie), she was the last Democratic candidate standing.

Can I Bet On Tulsi Gabbard Now?

Mahalo! Yes, you can! Gabbard, while no longer running for President, is still a potential Vice President selection for Joe Biden or Bernie Sanders. As such, you can wager on her in that context, though most offshore books put her at the very bottom of their odds boards.

Gabbard never had great chances to win, and she likely torpedoed her campaign the very moment that she viciously ended Kamala Harris’ at in one of the earliest Democratic debates. At the odds boards, she was only ever included because she never actually dropped out (until March 19, 2020).

Tulsi Gabbard’s Chance Of Winning Based on Prediction Markets

According to the analysts at Predictwise, Gabbard had a pretty slim chance of becoming President in 2020.  Given a 1% chance at winning the presidency, Gabbard was definitely positioned towards the bottom of the field of candidates. The party’s front runners were pulling much larger numbers than Gabbard, of course.

The majority of the U.S. wants Medicare for All, affordable education, & the means to address climate change and rebuild our crumbling infrastructure. Many candidates in 2020 will promise these things. But these promises will not become a reality until we have this peace dividend. – Tulsi Gabbard

Tulsi Gabbard stated that her Presidential campaign would center around policies such as “War and Peace” Foreign Policy, Wall Street Reform, Healthcare for All Americans, Criminal Justice Reform, $15/hr Minimum Wage, the Green New Deal, and Fighting Climate Change. However, Gabbard has said herself that Foreign Policy was the center of her campaign and above all other policy goals mentioned.

At the start of Gabbard’s political career, she was considered an economic progressive by Democrats which excited the party, however, now Gabbard is considered a Conservative Democrat as her policies toward Foreign Wars, LGBT Rights, and Islam have typically shown themselves to align-right. At the start of Gabbard’s career in the Hawaii Legislature, she vowed to pass a constitutional amendment against gay marriage. She also opposed abortion rights and supported Fighting ISIS and “Radical Islam” by any means necessary which translated into Gabbard meeting with top foreign dictators from Syria, Egypt, and India.

After returning from her Military Tour, Gabbard changed her Conservative outlook on LGBT rights and Abortion claiming the oppression the people abroad faced trying to abide by their governments will force her to revisit and correct her own perspective about local governments controlling and limiting people’s lives and choices.

Throughout Gabbard’s political career thereafter, she supported Gay Marriage, the Restoration of the Glass-Steagall Act, Medicare for All, and opposed the Trans-Pacific Partnership. However, Gabbard remained vocal about U.S. Foreign Policy and what she considered neglect by the Obama Administration which felt like a betrayal to Democrats. These attacks would usually occur while Gabbard was being interviewed on Republican news and commentary shows, further fueling Republicans and isolating her from the left.

Those who want to examine the complete list of political policies Gabbard voted in favor for can do so through the link provided. To summarize here, Gabbard supported several policies which supported natives, local industries, early education, and affordable housing including the Every Student Succeeds Act (ESSA), reauthorize the Native American Housing Assistance and Self-Determination Act (NAHASDA), the Native Hawaiian Education Reauthorization Act under the Every Student Succeeds Act (ESSA), the Agriculture and Nutrition Act, the Department of Defense and Labor, Health and Human Services, and Education Appropriations Act, and the Energy and Water, Legislative Branch, and Military Construction and Veterans Affairs Appropriations Act.

Gabbard’s political experience starts in 2002 when she won a seat in the Hawaii House of Representatives and earned the title of the youngest woman to be elected to a state legislature. Gabbard kept this seat until 2004 when she decided to serve in a combat zone in Iraq with the Hawaii Army National Guard within their field medical unit and was positioned there until 2005 becoming the first state official to voluntarily step down from public office to serve in a war zone; she was later deployed to Kuwait. Her service earned her the title of Company Commander.

In 2006, Gabbard returned from her Military Tours to serve as a Legislative Aide to Senator Daniel Akaka. In 2010, Gabbard campaigned for a position in the Honolulu City Council, won a seat as Councilwoman, and retained this seat until 2012. In 2013, Gabbard then campaigned and won a seat as a U.S. Representative, currently representing Hawaii’s 2nd Congressional District.

In Gabbard’s early life she worked with her father, a Hawaiian Senator, and co-founded an environmental non-profit called the Healthy Hawai’i Coalition which teaches children the importance of protecting the local environment. Gabbard also co-founded another non-profit called Stand Up for America (SUFA). In 2011, Gabbard also visited Indonesia as part of peacekeeping training with the Indonesian Army.

Tulsi Gabbard has made several attacks against expanded gambling. Noting her Hawaiian background, which has historically been an anti-gambling state, it comes as no surprise. However, Gabbard, along with Utah Congressman Jason Chaffetz, introduced the Restoration of America’s Wire Act (RAWA) on behalf of Sheldon Adelson, a billionaire casino mogul. RAWA was originally drafted by Adelson’s lobbyist as an attempt to outlaw online gambling in favor of protecting his land-based casino venues.

Therefore, either Gabbard is accepting donation contributions by Adelson and pitching anti-gambling policies or is only closely working with anti-gambling legislators due to their alignment with her own stance against gambling.

How Much Can I Win If I Bet On Tulsi Gabbard?

Before she dropped out, Gabbard was pulling odds of +20000 to win the DNC nomination and +50000 to become President. That means that if you had bet $100 on her to be the Democratic nominee and she won, you’d have earned $20,000. Similarly, had you bet the same amount on her to become POTUS and she won that position, you’d have made a cool $50,000.

Now that she’s no longer in the race, of course, anyone who bet on Gabbard in these markets has officially lost their wagers. You can still bet on her slim VP chances, though.