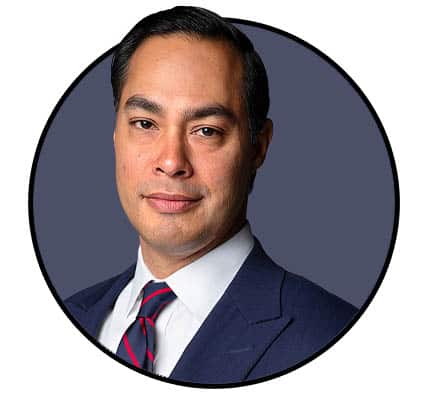 Who is Julian Castro?

Julian Castro is a 44-year-old politician who was the former mayor of San Antonio between 2009 and 2014 before serving as the Secretary of Housing and Urban Development from 2014 to 2017. Castro was the first Hispanic to deliver the keynote address at a Democratic National Convention. He announced his candidacy for the 2020 Presidential run on January 12, 2019, as a Democrat.

Due to Castro’s heritage, his home state of Texas, and his stances on certain policies, it appears that he is campaigning to minorities, among other fringe groups. A list is provided below with some of Castro’s prominent voting support:

Odds for Julian Castro to win the 2020 Presidential Election

Of the potential candidates to face Trump, sportsbook betting odds indicate that Castro is not likely to make it to the election, much less beat the incumbent.  The odds and polls are not in Castro’s favor, placing him in the back of the field in most lists. In many cases, celebrities not even in the presidential race, like Oprah Winfrey, have the same odds to win as Castro.

Although Castro is struggling to make a splash in the Democratic Party, he continues to earn the required donations and polling numbers needed for the debates, meaning he still has a shot to prove himself.

The chances of Castro earning the Democratic nomination are not likely in 2020. Even though he is earning donations and polling enough to make the debates, Castro is not able to break into the party’s top tier, reserved for names like Elizabeth Warren, Joe Biden, and Bernie Sanders.

Currently, near the bottom of the pile with the likes of Tom Steyer and Marianne Williamson, Castro is only hanging onto hope going into 2020.

Can I Bet On Julian Castro Now?

You can certainly wager on Julian Castro to win the DNC nomination and/or the 2020 US Presidential election at any of the top offshore betting sites. In fact, by doing so now, you can lock in the best possible odds on the candidate.

Waiting until later in the cycle to place your futures bets on politicians, while often viewed as “safer,” is also substantially less profitable. Castro’s current odds are the best they’re likely to get, so if you feel he has a chance at winning out, you should maximize your potential payout by betting on him today.

Castro’s odds mean that he is considered a longshot in terms of odds and polls, hardly better than small-name candidates like Michael Bennet and Tim Ryan. Odds place him near the bottom of the list of potential candidates, but that can change with the effectiveness of his campaign.

Nonetheless, competition from other Democrats like Warren and Biden increases the challenge for the former HUD Secretary.

Julian Castro’s Chances Of Winning Based On Prediction Markets

His chances, or lack thereof, are even lower than the 1% of Amy Klobuchar, Beto O’Rourke, and Tulsi Gabbard, all bottom-tier candidates barely holding on to their presidential hopes.

“In the end, the American dream is not a sprint, or even a marathon, but a relay. Our families don’t always cross the finish line in the span of one generation. But each generation passes on to the next the fruits of their labor.” – Julian Castro

While he has not explained in detail how he will accomplish these campaign goals, Castro’s commitment to them is unwavering.

Castro has served as Mayor of his hometown of San Antonio and later served as HUD Secretary under the Obama Administration. As Mayor, Castro introduced a revolutionary policy for an innovative pre-kindergarten program that allowed children from lower-income families to receive free Pre-K education and middle-class families to pay on a sliding scale. As HUD Secretary, Castro was accused of selling too many mortgages to Wall Street Banks without enough oversight and regulation citing poor management of delinquent mortgages by fellow Democrats like Elizabeth Warren and others.

Julian Castro’s twin brother Joaquin is a Texas House Representative and has a larger voting record than his older Presidential running brother Julian. However, Julian does have more political experience over other running Democrats even if it was at the local and state level, peppered with some federal experience through the Housing and Urban Development department.

Castro campaigned for the San Antonio City Council in 2000 while still at Harvard as a student. He won a seat as Councilman in 2001 until 2005, where he then attempted to run for Mayor of the city but lost. Castro ran again for the position of Mayor in 2009 and won; Castro remained the Mayor of San Antonio until 2014 by winning his re-elections in 2011 and 2013.

Castro gained the national spotlight after becoming the first Hispanic to deliver a keynote address during the Democratic National Convention in 2012. In 2014, Julian Castro was appointed by then-President Barack Obama to be the Secretary of the U.S. Department of Housing and Urban Development. Castro also has a background as an Attorney for Akin, Gump, Strauss, Hauer, & Feld, and through his own Private Practice.

Julian Castro attended Stanford University where he says he personally benefited from affirmative action. Castro graduated from Stanford in 1996 with a bachelor’s in arts in Political Science and Communications. Castro then went to Harvard University and entered their Law School program earning a Juris Doctor (J.D.) in 2000.

In Castro’s youth, he was very active with his brother on local activism campaigns led by his mother Rosie Castro, a Chicana activist. Julian Castro has earned himself several public accomplishments, awards, and titles such as the Young Global Leaders award, the World Economic Forum, and named 40 Under 40 for Rising Politicians by Time magazine in 2010. Castro also founded the SA2020 a campaign to complete community goals to improve San Antonio by 2020.

Castro also published his memoir after he finished serving as part of the Obama administration’s HUD Secretary due to limitations to work on it while appointed to public office.

Castro is familiar with the concept of betting as a famous wager was made between the then-San Antonio Mayor Julian Castro and Miami Mayor Carlos Gimenez over the 2014 NBA Finals over a case of Miami’s Joe’s Stone Crabs and a platter of San Antonio’s Tex-Mex food. Castro lost his bet and made good on his promise. While Castro is familiar with wagering, he has not made any public comment or policy stance regarding gambling.

How Much Can I Win If I Bet On Julian Castro?

Wagers on Castro would give bettors a great return, but the risk is high. On Bovada, Castro’s party nomination odds are +7500, which would result in a $7,500 payout on a $100 bet.

A bet on his presidential odds is even less favorable, which would result in a higher payout if Castro were to win. A $100 bet on Castro winning the presidency would pay $10,000.