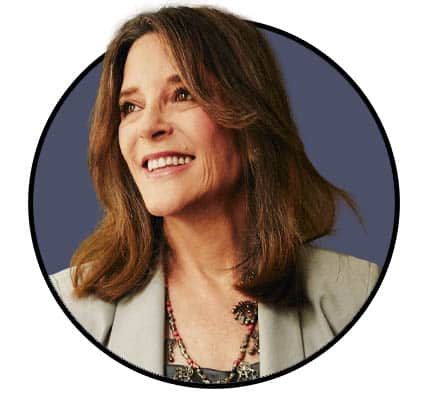 Who Is Marianne Williamson?

Marianne Williamson is a 66-year-old spiritual leader, author, actress, singer, and activist. She announced her run for the 2020 presidential election as a Democrat on January 28, 2019. Best known for her New York Times bestsellers, particularly A Return to Love: Reflections on the Principles of A Course in Miracles. Before running for president, Williamson ran an unsuccessful U.S. House of Representatives campaign as an independent for California 33rd congressional district.

Odds For Marianne Williamson To Win The 2020 Presidential Election

Out of all the potential candidates to win the Presidency, sportsbooks do not give Marianne Williamson great odds to directly oppose Trump in the 2020 Election. This is likely due to other Democratic candidates, such as Elizabeth Warren and Joe Biden, taking the spotlight. On certain sportsbooks, Williamson’s odds to win the presidency are so low that they are grouped with non-candidates like Oprah Winfrey and Ted Cruz.

Williamson, while still technically in the race, has no odds at any reputable betting site. She is not considered a credible candidate, and there is no indication as to why she’s actually still in the race outside of using the experience as fodder to write another self-help book.

Can I Bet On Marianne Williamson Now?

Our crystal ball says that Marianne Williamson wagers are likely finished at all the top political betting sites. While the public has a high level of interest in Williamson, bettors do not view her as a serious Democratic candidate. If you think a Williamson win is in the cards, a wager now would be timely enough, if you can find a book offering odds.

Odds are currently unfavorable for Marianne Williamson as oddsmakers do not see her as competition against Donald Trump for the 2020 election. If Williamson elects to remains in the race, she will need to qualify for the Democratic debates to get some much-needed exposure. Williamson, like Trump, is a celebrity figure with no political experience, proving even the most unique candidates can win a presidential election.

Marianne Williamson’s Chances Of Winning Based On Prediction Markets

Since Williamson is such a unique candidate in the race, prediction markets usually do not have much information on her. Predictwise doesn’t even list the spiritualist on their chances of winning the Democratic nomination. To actually earn the Democratic nomination in 2020 and go head-to-head with Trump, Williamson will need to knock off Bernie Sanders, Joe Biden, Elizabeth Warren, and every other DNC hopeful.

The practice of forgiveness is our most important contribution to the healing of the world. – Marianne Williamson

Marianne Williamson is running her 2020 Presidential Election campaign on policies that provide Education, Universal Healthcare, Criminal Justice Reform, reduce Student Debt, correct Wealth Inequality, fight Climate Change, support a $15 minimum wage, and those which pay Reparations to Natives, and African-Americans. Marianne Williamson has also been a long-time advocate for racial justice and race relations, as well as, encouraging Women into positions of power and creating support foundations for those affected by HIV/AIDs.

In 1979, Williamson ran a combo metaphysical bookstore and coffee shop in Houston, Texas. In 1983, Williamson moved to California where she began lecturing on healing spirituality and toured around the world. In 1992, Williamson published her first book a Return to Love and twelve other self-help books later on in her life, with her 1997 book Healing the Soul of America providing political yet spiritual tones and a movement toward progress and change.

In 2014, Williamson ran as an Independent for the California US House of Representative seat but was unsuccessful in winning the top two candidate positions and ranked fourth. In 2018, Williamson published her 20th anniversary revised edition of Healing the Soul of America, possibly to use in her 2020 campaign. Williamson sits on the Board of Directors of the RESULTS organization which is working to end poverty domestically and globally, as well as, produced the Sister Giant Conferences.

In 2019, Williamson announced her run after announcing the formation of an exploratory committee. She launched the Marianne Williamson 2020 campaign site shortly after her official announcement.

Williamson was an activist in the 80s during the eruption of the HIV/AIDs crisis and founded several Centers for Living which acted as an HIV/AID refuge and non-medical community support center for psychological and emotional resources. In 1989, Williamson created Project Angel Food to cook and deliver nutritious meals to HIV/AIDs patients and later extended the service to men, women, and children affected by life-threatening illnesses.

In 2004, Williamson co-founded The Peace Alliance, a nonprofit grassroots education and advocacy organization supporting peacebuilding projects and the US Government approach to peacebuilding rather than conflict focused foreign policy.

Williamson sits on the RESULTS Board of Directors that lobbies public office, produces research, and works with the media and public to create political pressure to end hunger and poverty globally.

While this candidate has yet to make any public statements regarding her political stance on gambling. She has written an excerpt that explains how she personally or at least professionally feels about gambling. She considers gambling a negative habit that is an indulgence that can lead to an addiction which she believes may be the cause of an unconsciously fueled physical desire that is mistaken for pleasure.

How Much Can I Win If I Bet On Marianne Williamson?

Nothing. There are no odds. However, if you find a book willing to take action on Williamson, you can probably score upwards of $100,000 on a $100 bet if she wins the Presidency.