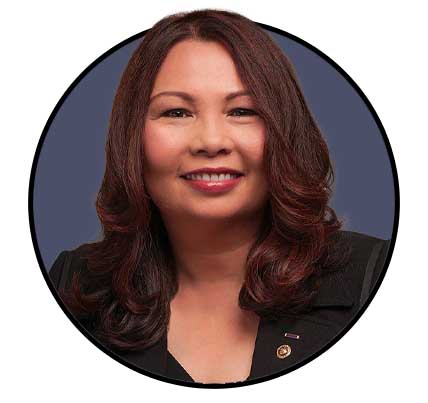 Now that the Democratic State Primaries are in full swing, the focus has shifted toward the selection of running mates for the leading Presidential candidates. Top sportsbooks have begun to offer Vice Presidential election odds, and Senator Tammy Duckworth has appeared as one of the leading contenders.

Duckworth is a current US Senator for Illinois and was previously elected to two terms in the US House of Representatives. She is a female and also a military veteran, which are attractive elements to add to the campaign arsenal of any Presidential candidate.

If you are the betting type, and you feel confident that Tammy Duckworth will become the running mate for the top Democratic Presidential candidate, then the time to place a wager is now. The VP could be selected any day now, so the betting odds could disappear, as well as your potential payout.

Who Is Tammy Duckworth

If you are looking for a no-nonsense candidate with some grit, Senator Tammy Duckworth fits the bill. She has served in the US Army as a helicopter pilot and was deployed for tours of duty in the Iraq conflict in the early 2000s. She knows the price of putting a citizen in harm’s way and has served her country honorably.

After her military tenure, Senator Duckworth became the Director of the Illinois Department of Veterans Affairs. In 2013, Dr. Duckworth was elected to her first of two terms in the US House of Representatives and became a US Senator for Illinois in 2017.

Odds For Tammy Duckworth To Be Democratic Vice President Nominee

When Is The Best Time To Bet On Tammy Duckworth?

Dr. Duckworth was born in 1968 in Bangkok, Thailand. When she was sixteen, Duckworth’s family moved to Hawaii. She was able to graduate high school in 1985 after skipping the 9th grade and graduated with a degree in political science from the University of Hawaii in 1989.

She went on to enlist with the US Army as a helicopter pilot and fought in the Iraq conflict. In 2004 she suffered the loss of both legs when her helicopter crashed. She was awarded the Purple Heart, was fitted with prosthetic limbs, and today she has full mobility. Senator Duckworth is married and has two daughters.

In 1989, Senator Duckworth graduated from the University of Hawaii at Manoa with a BA in political science. She completed her Master of Arts in international affairs at George Washington University, and in 2015, Duckworth earned a Ph.D. in Human Services at Capella University.

How Much Can I Win If I Bet On Tammy Duckworth?

Because Bovada is currently offering the lowest odds on Tammy Duckworth to become the Democratic VP nomination, we recommend using them if you intend to place a wager on her. The maximum bet that can be made on Tammy Duckworth is $69.44, which will earn a payout of $1249.92 if she secures the Vice Presidential nomination.

Why Tammy Duckworth Will Become The Democratic VP Nominee

You might notice a trend when glancing at the VP betting odds on 2020 hopefuls. Almost all of them are women. A woman has never held the office of Vice President of the United States and this election cycle could provide just the right atmosphere to add a feminine presence in the White House.

Duckworth brings her years of military experience to the table. She has shed blood while protecting the country overseas, and that will go a long way with military veterans. She has been elected to both federal legislative bodies and has expert level knowledge on their proceedings. She is more than qualified to chair the US Senate.

Duckworth has historically supported environmental efforts that target clean water supply and the reduction of greenhouse gas emissions and desires stricter regulations on background checks for gun and rifle purchases. She is a gun owner herself, and that could go a long way in picking up crossover votes.

What does Tammy Duckworth stand for?

Senator Tammy Duckworth has been a long time supporter of environmental efforts, advocating for water quality improvement and the lowering of carbon emissions during her time in politics. She has also supported gun-control, favoring extensive background checks, although she is a gun owner. Duckworth also supports free healthcare for all Americans and abortion rights.

Can Tammy Duckworth run for President?

Did Tammy Duckworth lose her leg?

Tammy Duckworth actually lost both legs while serving in the US Army in Iraq. She suffered the injury in 2004 when a rocket-propelled grenade hit a helicopter she was piloting. Duckworth has since been fitted with prosthetic legs and maintains full mobility.

Is Tammy Duckworth a Democrat or a Republican?

Dr. Tammy Duckworth is a member of the Democratic Party and has been elected to the US House of Representatives and the US Senate as a Democrat. She is now a leading contender to be selected as the VP candidate for the 2020 Presidential election.

No, Tammy Duckworth is straight. She married Bryan Bowlsbey in 1993, and they are the proud parents of two daughters.

When is Tammy Duckworth up for re-election?

Dr. Duckworth’s term as a US Senator concludes in January of 2023. Since the election cycle is so far off, Senator Duckworth has yet to declare her intention to run for another term.