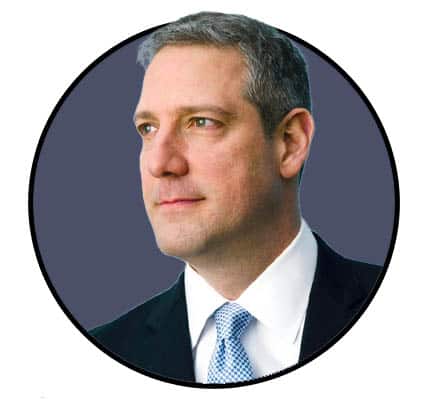 Who Is Tim Ryan?

Tim Ryan is a 45-year-old Democrat. Born in Niles, Ohio, this politician has served as a U.S. Representative of Ohio’s 13th District since 2013. On April 4, 2019,  Ryan announced his run for the 2020 Presidency. For a short time between January 2001 and December 2002, Ryan was a member of the Ohio Senate from the 32nd district. Most recently, Ryan ran an unsuccessful challenge to unseat Nancy Pelosi as the party leader of House Democrats in 2016.

Hailing from Ohio, Ryan attracts support from his fellow Rust Belt neighbors, many of which are blue-collar workers.  As a moderate Democrat, Ryan also garners support from centrists across America. A non-comprehensive list of Ryan’s supporters is below:

Odds for Tim Ryan to win the 2020 Presidential Election

At this time, online political betting sites do not give Ryan much of a chance to take on President Trump in the 2020 election. Some sportsbooks, like Bovada, do not even list Ryan’s odds of winning the presidency, proving that his shot at the White House is nearly impossible. For perspective, Ryan’s lack of odds is even worse than Oprah Winfrey and Kanye West’s chances of winning in 2020.

Tim Ryan’s odds to win the Democratic nomination are not very favorable either. As a low-level moderate, Ryan is shadowed by candidates like Joe Biden that hog the spotlight with similar views. Ryan usually sits with Marianne Williamson and Michael Bennet in terms of odds, a group of hopefuls that are all longshot candidates.

Ryan’s current odds tell us that he is not likely to earn the Democratic nomination, much less defeat Trump in the 2020 election. To even get to that point, Ryan would have to go through Warren, Biden, Sanders, along with the rest of the party just to become the nominee.

Tim Ryan’s Chances Of Winning Based On Prediction Markets

Of the Democrats still qualifying for the debates, only Julian Castro shares 0% chances with Ryan.

A rust belt native, Ryan’s running policy supports the Green New Deal for advancements in green energy and tech to incentivize business investment and revive economic industries which are failing domestically like the car manufacturing industry. Ryan is also running on the platform of rebuilding our economy by investing in American workers, focusing on becoming a leader in electric vehicles and renewable energy, and fighting climate change.

Ryan has had a focus on the manufacturing industry during nine terms in the House of Ohio. Ryan also offered legislation to change U.S. trade policy with China and others. He co-sponsored Medicare for all, was once pro-life and is now pro-choice, supports reducing federal defense spending in favor of balancing the US budget, supports the regulation of indirect campaign contributions from corporations and unions, and supports federal spending as a means of promoting economic growth. He voted nay on the Border Security and Immigration Reform Act of 2018, the Securing America’s Future Act of 2018, the Criminal Alien Gang Member Removal Act, the No Sanctuary for Criminals Act, and on Kate’s Law.

After graduating from college, Ryan joined the staff of Jim Traficant, an Ohio congressman. From 2000-2002, he served a half-term in the Ohio State Senate. In 2003, he ran for the Ohio Representative seat of District 17 and won, he maintained the seat until 2013.

In 2013, he ran for Ohio’s 13th District seat in the House and won, he has served in this seat ever since. In April of 2019, Tim Ryan announced his run for the 2020 presidency and released the Tim Ryan for America 2020 campaign website.

Tim Ryan attended and graduated from Bowling Green State University in 1995 with a Bachelor of Arts degree in Political Science. In 2000, he obtained a Juris Doctor (J.D.) degree from the Franklin Pierce Law Center which is now known as the University of New Hampshire School of Law in New Hampshire.

There was little to no public records to be found on Tim Ryan’s social work, activism, or volunteering habits. However, this does not mean that Ryan has not performed any acts of civil service before.

Ryan’s views on gambling are unknown. He has made little comment on the issue; however, it is likely that through his campaign and several Presidential debates he will be forced to comment on the issue. When he does, we will update this section with his response.

How Much Can I Win If I Bet On Tim Ryan?

Since odds aren’t yet available for Ryan, an accurate prediction on winnings cannot be made. However, since he is such a minor candidate, even a small bet could equate to a huge payout once his chances are presented by oddsmakers.