2022 Adam Schiff Reelection Odds For The US House of Representatives *More odds available at Bovada
Adam Schiff is a US Representative from California’s 28th District, and he is an influential and powerful Democratic presence in Washington, D.C. politics. Representative Schiff has been serving in Congress since winning his seat in the US House elections of 2000. Schiff has held many positions of leadership in the US House and was a key player in the impeachment of President Donald J. Trump, for which he is most notable.

Adam Schiff’s reelection odds for the US House of Representatives will be worth betting on, as he is extremely popular with his constituents and is positioned to continue his efforts on Capitol Hill in 2022. Even if his particular Congressional race is a foregone conclusion, there will be plenty of other political prop bets and Congressional betting lines to choose from.

Who Is Adam Schiff?

Representative Adam Schiff has been serving in the US House of Representatives for 20 years on behalf of his home state of California. Over that time, he has risen in power amongst the Democratic National Committee and is currently the Chair of the House Intelligence Committee.

Schiff rose to national prominence when he acted as a lead investigator in the House’s Trump impeachment efforts in late 2019. Schiff was instrumental in successfully convincing the US House to impeach Trump, making Trump the third President in the history of the United States to receive that dishonor.

Is It Legal To Wager On US House Of Representatives Election Outcomes?

Betting on political election outcomes does not violate the law when using an offshore sportsbook operating online. Vegas and other domestic sportsbooks may offer odds on US Congressional campaigns, but they are merely for informational purposes and to attract attention. Domestic sportsbooks are not allowed to accept wagers on political betting action.

Online sportsbooks are not illegal to use because federal and state gambling laws fail to even mention the activity, much less outlaw it. Washington has passed laws that do not allow bettors within state lines to wager online, but we’ve never heard of any fines or arrests for that “crime” in there. Still, abiding by all local gambling laws is advised.

As of this writing, Schiff does not have any odds on his chances for reelection to California’s 28th Congressional seat. Betting lines are sure to arise at top-rated online sportsbooks, and we expect the odds to favor him to win in a landslide. His district is largely populated with Democrat voters, and Schiff is very popular among his base.

US House Of Representatives 2022 Betting Odds

Although no specific odds have yet to be published that allow for wagering on Schiff’s electoral race in November of 2022, there are a few betting lines involving how the control of the US House will sway after all votes are cast. Here are two examples from Bovada and BetOnline.

Between 1987 and 1993, Rep. Schiff was an Assistant United States Attorney. Schiff unsuccessfully campaigned for the 43rd California State Assembly district seat in 1994, losing twice to Republican James Rogan, first in a special election and then during the regular election cycle. In 1996, Schiff was elected to California’s 21st Congressional District (state-level), where he served for four years before representing the 27th District in the US House (2001-2003), the 29th District (2003-2013), and the 28th District (2013-present).

When Is Adam Schiff Up For Reelection?

US Congressional seats are up for reelection every two years, so members of the House are always on the campaign trail. Representative Schiff will face off against Republican challenger Eric Early late this fall to try and retain California’s 28th Congressional seat. The district leans heavily toward the left, and Schiff is expected to win in 2022.

On June 7, 2022, California voters will vote in the 28th District US House primaries and send the top two candidates with the highest tallies onward to face off in the General Election cycle. The contenders that finish first and second move on to the next round regardless of political affiliation, meaning they both can be a member of the same party.

Can I Bet On Adam Schiff Now?

We know that eager political bettors would like to go ahead and place a wager on Rep. Schiff right now, but since there are no odds available at the moment for his specific CA US House race, gamblers will have to wait. Odds typically appear within a month or two of the November general election, so keep checking back with the online sportsbooks recommended on this page.

For now, online political gamblers can partake in the US House odds that predict the overall balance of power.

How Much Can I Win If I Bet On Adam Schiff?

Online sportsbooks set maximum bet amounts on each wager, as well as a max for each wagering option for any betting line. These will differ depending on the book that you use, but political odds use the standard American moneyline. So if you see Schiff odds at, say, -3000 in the general, that means that it would take a $3000 wager just to win $100.

Depending on the limits in play, it may not even be possible to wager (or win) that much on a single bet, though some books will allow you to place several of the same bets if you wait a set time before doing so. However, you must always contact customer service for clarification on this policy.

Schiff was born in Framingham, MA, on June 22, 1960, and was raised in a practicing Jewish household. His family settled in California in 1972, and Schiff has considered CA to be his home since that time. After graduating with a J.D. from Harvard Law School, he became an Assistant United States Attorney from 1987 until 1993.

After serving one term in the California State Senate, Schiff was elected to the US House of Representatives, where he has held office since 2000. He has held many leadership positions since his election nearly twenty years ago, and he continues to be a big-time player in Washington, D.C. politics. Schiff is now the Chair of the House Intelligence Committee (an oxymoron if we’ve ever heard one), and he has been married to wife Eve Sanderson since 1995. The couple shares two children.

After a stellar academic high school career where he was the senior class valedictorian and was voted most likely to succeed, Congressman Schiff earned a B.A. degree in political science in 1982 from Stanford University. He then went on to Harvard Law School, earning Juris Doctor degree in 1985.

Gambling has not been a focus of Adam Schiff’s agenda over the course of his political career, but he has made some key legislative votes in the past that indicate that he is not an opponent. That said, he has voted against several gambling expansion measures as well, making him more or less neutral on the subject.

A 2018 report estimated Representative Schiff’s net worth to be in the neighborhood of $1.5 million. He made his fortune through his salary as a US Congressman.

Actor Steven Hill played the fictional character of Adam Schiff on the immensely popular television crime drama Law & Order. The character is not based on Representative Schiff or anyone else in the real world. All similarities of name or appearance are purely coincidental. If you believe that.

“Every single vote, even a single vote by a single member can change the course of history. It is said that a single man or woman of courage makes a majority. Is there one among you who will say ‘enough!’?”

Senator Schiff has been the target of creative meme creators around the United States and has inspired many online postings. Here are some of the more “tasteful” memes that we have seen. 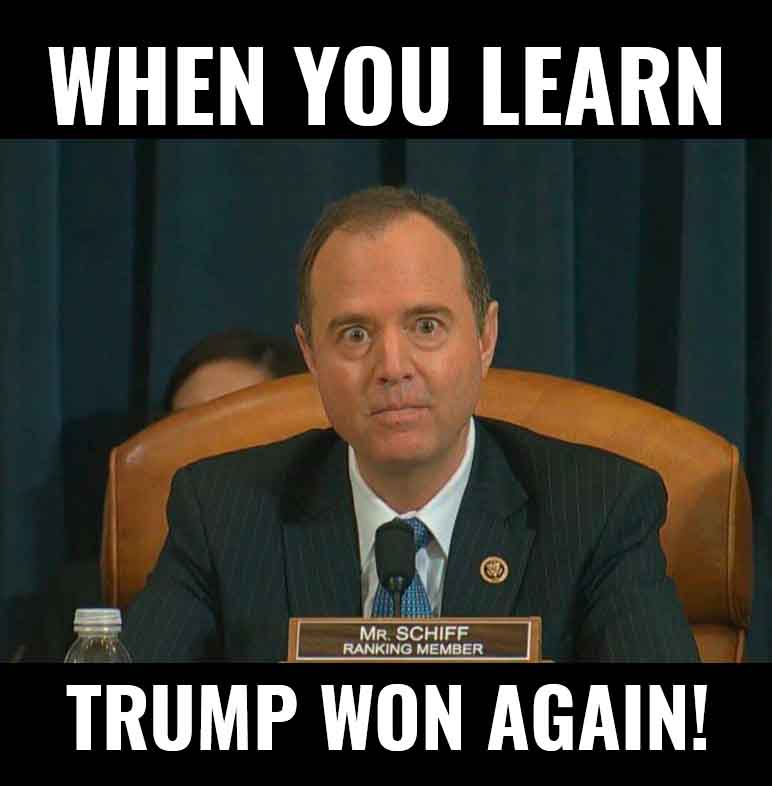 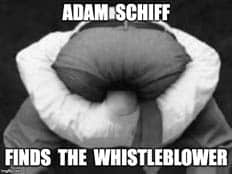 Adam Schiff Email: Congressman Adam Schiff does not post a public email address at this time.

Yes, Adam Schiff is a married man. He wed Eve Sanderson in 1995 and the couple has two children – a boy (Elijah) and a girl (Alexa). Presumably, they do not use Amazon’s voice-recognition platform in their home.

Adam Schiff is not openly gay. He is married with two children, albeit that is neither proof nor disproof.

How old is Adam Schiff?

How tall is Adam Schiff?

Adam Schiff is 5’11’ tall. He comes in slightly above the average American male height of 5’10”.

Does Adam Schiff have Graves Disease?

No, US Rep. Schiff does not have Graves Disease. There has been internet-based speculation that his large eyes indicate that he is suffering from the effects of Graves Disease or an issue with his thyroid gland, but these are merely rumors.

No, Adam Schiff is not an in-law of the Soros family. George Soros is an infamous Hungarian-born Democratic Party donor and event planner that has a seemingly unending supply of money. His attachment to Schiff was likely a result of backlash due to his involvement in the Trump impeachment process.

Where is Adam Schiff from?

Representative Schiff was born in Framingham, Massachusetts, in 1960. In the early 1970s, his family relocated to Arizona and then California. Schiff has called the Golden State home since 1972, where he has struck political gold.

How did he get the Pencil Neck Adam Schiff nickname?

President Donald Trump dubbed Adam Schiff as a “little pencil neck” at an Ohio rally in January of 2020.

Is there any chance of an Adam Schiff impeachment?

Not at the moment. Adam Schiff polls at an overwhelmingly favorable rate in his District, his record is relatively clean, and the DNC has the majority in the US House.

Where is Adam Schiff on Joe Biden?

President Joe Biden was likely not Adam Schiff’s first choice, but now that he has defeated Donald Trump and assumed command, most power players in the Democratic Party have fallen in line with the POTUS.

What is the Adam Schiff, Standard Hotel situation?

In trying to prove his impeachment case against Donald Trump, Adam Schiff released the phone logs from the Standard Hotel for Representative Devin Nunes and reporter John Solomon. The logs proved to be irrelevant to the case.