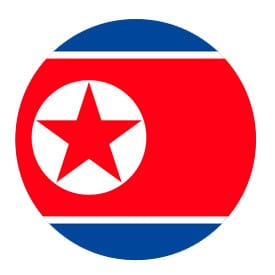 North Korea is one of the strangest countries on earth, widely condemned but with little factual basis to go off of due to the nation’s intense secrecy. And while the politics of the country are controversial, they are also relatively stable, with a clear leader structure (or “Dear Leader” structure), which makes finding North Korea political odds something of a rarity.

That said, due to the state of North Korea politics today, and thanks to current leader Kim Jong Un’s alleged health issues and largely unknown whereabouts, you can find betting odds on who will replace Kim Jung Un as Supreme Leader Of North Korea. You can also occasionally find North Korean political props, particularly when US President Donald Trump is involved (he has met with Kim on three separate occasions in efforts to bring the impoverished nation into the 21st century).

If you want to be on North Korean politics, now’s the time to do so, as odds are up and action is brisk. Remember, these lines aren’t always available, so if you’re not a member of a reputable offshore sportsbook, now’s the time to “defect” and get your bets in!

Is It Legal To Bet On North Korean Politics?

If you live in North Korea, then no. It’s arguably illegal to even use the Internet over there. Of course, if you want to be one of the many alleged political prisoners in North Korea, you can certainly try to place an online wager.

Fortunately, if you live in the good old US of A, then you can freely wager on North Korea politics at any legitimate offshore betting site. These sites mainly offer US political lines like 2020 Presidential election odds, but they occasionally have international politics, and current North Korea political issues have given sportsbooks the edge they need to offer the action you want.

Because these books are located offshore and operate outside of US jurisdiction, they are safe and legal to use. Remember, there are no federal laws of any kind that prevent Americans from using offshore gambling services, and only two states – Washington and Connecticut – have nominal laws against online gambling (though these are historically unenforced).

While we recommend following all local mandates, residents of WA and CT are nevertheless able to sign up and gamble online. But just like trying to escape North Korea, you must proceed only at your own risk.

Kim Jong Un has not been seen in North Korea since April 11. However, there have been countless reports of the Supreme Leaders’ possible

It is unlikely that the mysterious enclave will ever see democratic elections, but you will get political futures and props on occasion, particularly when the current Supreme Leader pulls one of his now-infamous disappearing acts.

By going missing in April 2020, Kim Jong Un health speculation was rampant, with reports flooding in that Kim had passed away or was comatose after a cardiovascular procedure, which prompted offshore betting sites to offer odds on his successor.

While Kim has now allegedly reappeared in public, he is fatter than ever, and with his four-packs-a-day cigarette habit, it seems likely that the following odds will stay up for the time being (via Bovada):

Who Will Replace Kim Jung Un As Supreme Leader Of North Korea?

North Korean leader Kim Jong Un and US President Donald Trump have more of a relationship than any previous administrations of either nation and while some criticize Trump for maintaining a friendly dialog with NK, it seems to be working. The goal is to reach a deal on the Asian country’s nuclear proliferation ambitions, and discussions are ongoing.

The two leaders have met on three separate occasions during the Trump presidency, with the third meeting being historic as The Donald became the first US president to step onto North Korean soil.

Whether or not the positive relationship will continue remains to be seen, but for a time, there was hope that North Korea would disarm, and this led to speculation about Donald Trump winning the Nobel Peace Prize for his efforts.

Who Is Kim Yo Jong?

Kim Yo Jong is Kim Jong Un’s younger sister, and she has become nationally prominent, fulfilling the role of “Party Center” that has traditionally been a precursor to ascension to Supreme Leader.

International political pundits are hopeful that her quiet, soft-spoken demeanor could signify a softening in the alleged brutality that has defined the North Korean state since its inception, though little is known of her political stance, and North Korea news services aren’t exactly trustworthy in their depictions of her.

Really, only one thing is known about her potential leadership style: If Kim Yo Jong takes over as Supreme Leader of North Korea, it is unlikely that she will wear the infamous Kim Jong Un haircut. Other than that, speculation is the order of the day. Which is very good news for political bettors!

While most countries have several notable politicians at any given time, that is not the case with the political situation in North Korea. Literally every government official – most of whom are nameless – serve at the pleasure of the Supreme Leader, and said Supreme Leader is notorious for allegedly purging dissenters.

That said, there are notable members of the ruling family, including the following:

Kim Jong Un – Kim is the current Supreme Leader of North Korea, having taken over for his father on December 17, 2011, at roughly 28-30 years of age. Trump has called Kim “Little Rocket Man” on several occasions, and Internet memes regular refer to the dictator as a “fat boi.” Kim is reportedly between 36 and 38 years old.

Kim Yo Jong – Kim Yo Jong is Kim’s younger sister (30-32 years old), and she is the odds-on favorite to replace her older brother as the Supreme Leader of North Korea. In fact, she has apparently been groomed for this eventuality, and she holds a position “Party Center,” which her brother and father both held prior to their eventual takeovers of the country.

Kim Jong Chol – Kim Jong Chol is Supreme Leader Kim’s older brother (roughly 40 years of age), though he was passed over for succession due to his alleged delicate demeanor, with father Kim Jong Il reportedly describing him as “like a little girl.” It is unlikely that Kim Jong Chol would be the heir to Kim’s “throne” given that he was already rejected for the position once before.

Kim Pyong Il – Kim Pyong Il is Kim Jong Un’s uncle, the paternal half brother of former leader Kim Jong Il. As an elder statesman in the North Korean political structure, it is highly unlikely that he would succeed the younger Kim going forward. At 65 years of age, he may be viewed as too old for the long reign desired by the Kim family.

North Korea, officially called the Democratic People’s Republic of Korea, or the DPRK, follows a political philosophy called Juche, which is a brand of socialism nominally predicated on self-reliance and individualism, which is fundamentally contradictory. The country, founded by Kim Il Sung in 1948, alleges to be a bastion of civil and human rights, though outsiders and defectors claim this to be a façade.

While the state is a democracy on paper and has “elections,” these elections are held for single, unopposed candidates, all vetted and approved by the ruling WPK (Worker’s Party of Korea). For all intents and purposes, this is the sole party in the nation, though there are nominally two other political parties that are legally bound to accept the rulings of the WPK, rendering them “parties” in name only.

There is a great deal of minutiae about how the country is run, but the political system of North Korea is totally monolithic, and the ruling class is bound to the Kim family in a sort of throwback to old monarchism. The North Korea political system is a target of constant criticism by other countries, and the nation calls China its only real ally on the world stage.

What is the North Korean Supreme Leader line of succession?

There is no defined line of succession in NK, but the state’s preference seems to be on installing full-blooded heirs to the position of Supreme Leader. If Kim Jong Un dies, there are currently several blood relatives that could qualify, though his younger sister is the most likely candidate.

How many political parties are there in North Korea?

Three on paper, but only one in practice. The Worker’s Party of Korea (WPK), of which Kim Jong Un is Supreme Leader, calls literally all the shots, which become shots in the very literal sense for those who would oppose the WPK’s directives. Allegedly.

What political party is North Korea?

There is effectively only one North Korea political party: the Worker’s Party of Korea, or WPK. This party controls all other “parties,” and elections are run uncontested with candidates preselected by the WPK. Further, the WPK is in charge of over 100 organizations that comprise the full state apparatus. Some of these include various youth leagues, the Socialist Women’s Union of Korea, the Union of Agricultural Workers of Korea, and so on. In effect, these can be viewed as government agencies that assign mandatory “membership” to the citizenry.

What political ideology is North Korea?

The political culture of North Korea is predicated on extreme centralized socialism and isolationism, with strict limits on speech, worship, expression, and other rights most citizens in developed nations take for granted.

How much does Kim Jong Un weigh?

Kim Jong Un’s weight problems have always been a topic of discussion, making him the target of much criticism due to reports of mass starvation in the country he runs. Most analysts put him at about 300 pounds. That, plus his chain-smoking habit and a history of heart disease in the family, means that you’re going to see his succession betting odds fairly frequently. The many Kim Jong Un health issues won’t be going away any time soon.

How tall is Kim Jong Un?

Kim Jong Un is thought to be between 5’4” and 5’7” inches tall, though this is pure speculation based only on photographs and video documentation. There is no officially listed height for the Supreme Leader.

How old is Kim Jong Un?

The official North Korean record lists Kim Jong Un’s age at 38 years old. However, due to various discrepancies in the way Korean birthdays are tabulated and the fact that there are conflicting records of the time of Kim’s birth, he could be as young as 36.

How old is Kim Yo Jong?

Officially, the listed Kim Yo Jong age is 32 years old. However, as with her older brother, she may be only 30 years old by Western standards.

Who is Kim Jong Un’s son?

This is unknown. Kim Jong Un apparently has three children by his wife Ri Sol Ju, though their ages and genders have not been publicized. Kim’s oldest child is thought to be a boy and is the heir apparent for the post of Supreme Leader if Kim lives long enough. All three Kim children are reckoned to be 3-10 years of age.

What are the Kim Jong Un Nobel Peace Prize odds?

Practically nil. This line of questioning arose a few years ago when it seemed that Donald Trump might be able to convince Kim to give up his ambitions for a nuclear North Korea, but those negotiations are ongoing. Still, even if Kim eventually disarms at Trump’s behest, the Peace Prize would likely end up going to someone else entirely, as neither man seems particularly popular with the Nobel Committee.

What was the Dennis Rodman Kim Jong Un meeting about?

Nobody knows. Kim Jong Un likes basketball, and Dennis Rodman was crazy enough to think that he could be some sort of ambassador for human rights by paying Kim a visit and shooting some hoops. It didn’t seem to accomplish anything, but it made for a comical plotline in the movie The Interview (2014).