One of the most trending candidates on the odds boards in 2020 to become the VP of Joe Biden, as well as the Governor of Georgia in 2018, was Stacey Abrams. A former state congresswoman from GA, Abrams has capitalized on her sudden national fame after refusing to concede losing the high-profile governorship election.

The Stacey Abrams movement has gained steam in Georgia, catapulting Raphael Warnock and Jon Ossoff to victories in the US Senate in 2020, and could help her become the Governor of GA in 2022. Her progressive Democrat views and past endorsements from Bernie Sanders make her a darling of the extreme left, albeit she is not likely to run against a DNC incumbent.

You can bet on Stacey Abrams’ Georgia Governor odds, her prospects of earning the Democratic Party’s 2024 Presidential Nomination, gamble on her chances of winning the White House, and other various political prop bets at any offshore sportsbook that accepts election wagers.

Who Is Stacey Abrams?

Stacey Abrams is a career Democratic politician from the state of Georgia who served for over a decade in the statehouse before running for governor and losing in 2018.

When the results of the 2020 Georgia US Senate runoff elections became the determining factor of the overall balance of power, Abrams threw her support behind Senators Warnock and Ossoff, toppling the GOP on Capitol Hill from all the way down in the Peach State.

Stacey Abrams is running for Governor in GA again in 2022, but Gov. Kemp appears poised to win another term in office. Abrams remains on the betting boards for nomination and Presidential election odds but is not likely to run in 2024 due to Joe Biden being the sitting Commander In Chief. Don’t expect Stacey to sit idly for too long, as her career ambitions and political odds are likely to heat up soon.

Betting On Stacey Abrams To Win The 2022 Georgia Gubernatorial Elections

On November 8, 2022, Georgia voters will decide who will become their Governor for the next four years. Stacey Abrams is once again running to become Georgia’s Governor, but incumbent Brian Kemp of the Republican Party seems positioned to easily win in 2022 based on the current political betting odds. GA has produced unexpected results over the past two election cycles, revealing the state’s ability to flip blue when voters are unified. That said, don’t count Stacey Abrams out just yet, as her underdog status in the odds can deliver hefty payouts to those that place a wager on her to win.

Betting Odds For Stacey Abrams To Win The 2024 DNC Nomination

Bovada and BetOnline feature a +5000 and +6600 moneyline on Stacey Abrams to become the 2024 Democratic Party Nominee to become President of the United States. While those moneyline odds are not promising in the slightest and reveal a minute change of relevancy, Abrams has yet to announce her intentions.

If and when Stacey Abrams for President becomes a reality, so will her nomination odds. Until then, her longshot odds to become the next Presidential Nominee for the DNC in 2024 merely represent a lottery ticket hedge for gamblers that love to play the underdogs.

Both Bovada and BetOnline are offering +5000 moneylines for Stacey Abrams to win the 2024 Presidential Election cycle, but BetOnline has posted the longest odds yet at +12500. While those odds may represent fool’s gold at the moment, those that bet on Stacey Abram now will have the last laugh if they cash in after all November 2024 ballots are cast.

Can I Bet On Stacey Abrams’ Chances of Becoming President Now?

Yes, you can wager on Stacey Abrams’ betting odds to be the next President of the United States. She’s listed on the odds boards for both becoming the Democratic Party’s Nominee, as well as winning the whole ball of wax and pulling up a chair behind the desk in the Oval Office.

For the apparent Democratic strategies at play, Abrams seems to be an unlikely victor in 2024, despite ticking all the correct demographics boxes.

As the day draws near for the Democratic candidates to announce their intentions, Abrams’ odds will likely narrow or go away altogether. So if you think she will get on one of the candidates’ tickets, get your “votes” in now for the best payouts!

How Much Can I Win If I Bet On Stacey Abrams?

Right now, the best payout on the board is at BetOnline on Stacey Abrams’ +12500 odds to win the Presidency in 2024. The max bet allowable on this political prop bet at BetOnline is $40, which will secure cash winnings of $5,000 if President Abrams gets sworn into office in January of 2025. 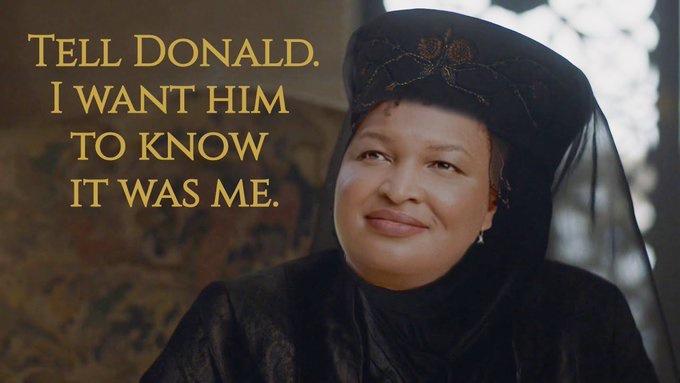 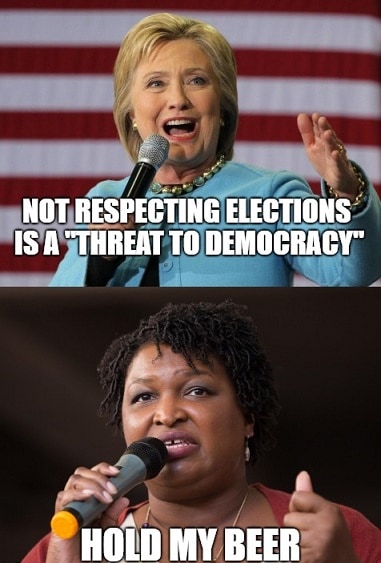 Stacey Yvonne Abrams was born on December 9, 1973, in Madison, Wisconsin. She was the second of six siblings. Her parents, Robert and Carolyn Abrams, raised her in Gulfport, MS, before the family moved to Atlanta, GA. As Methodist ministers, Abrams’ parents encouraged her to work in the public service sector from an early age.

After college, Abrams became a tax attorney (Sutherland Asbill & Brennan, Atlanta), and she later became a public servant at the governmental level.

From 2007-2013, Abrams was a member of the Georgia House of Representatives from the 84th District, and from 2011-2017, she was the Minority Leader of the Georgia House. She left her post in 2017 to run for Governor of GA. During that campaign, Abrams became the first black female major-party gubernatorial nominee in America, though she would eventually lose to Brian Kemp, a white male Republican.

In 2019, Abrams became the first black woman to deliver an official major party response to a State of the Union address. (Apparently, her main claims to fame involve her gender and race rather than her policies.)

Abrams is also a prolific writer of romantic suspense, working under the pen name Selena Montgomery. Her many novels have sold over 100,000 copies worldwide, and you can purchase Stacey Abrams books at fine retailers everywhere.

After that, she became a Harry S. Truman Scholar studying public policy at the University of Austin’s LBJ School of Public Affairs. In 1998, she received a Master’s degree from the school, and in 1999, she earned her Juris Doctor (JD) degree from Yale Law School. All in all, Abrams exhibited a typical politician’s trajectory in terms of schooling.

The 2018 Georgia gubernatorial race – Stacey Abrams vs Brian Kemp – was a contentious one, with Kemp winning by a narrow margin (roughly 50,000 votes). However, many critics of the election say that the Stacey Abrams results were incomplete or manipulated, as many idle and expired voter registrations had been purged from the Georgia rolls in the years preceding the election.

While this is standard practice, the man in charge of the protocol was Secretary of State Brian Kemp, who ran against Abrams for governor and won. Abrams stated that Kemp thus had a conflict of interest and should have recused himself from his normal duties with the state. Abrams also threatened to sue Georgia for voter suppression, discrimination, and various other complaints.

Top 5 Reasons Stacey Abrams Could Be The POTUS In 2024

Is Stacey Abrams leading in the polls?

Currently, there are no Stacey Abrams polls for her potential election. However, if she formally announces her intention to run for any office at all, you will be able to find Abrams’ polling data at the usual sites (FiveThirtyEight, RealClearPolitics, etc.).

No. The Stacey Abrams Georgia Governor campaign was endorsed by the likes of Bernie Sanders and Barack Obama, but she lost to Brian Kemp, who was the acting GA Secretary of State at the time. The vote differential was roughly 50,000, but Abrams claims that during Kemp’s role as SOS, he purged some 670,000 expired or defunct voter registrations from the rolls. Abrams alleges that this resulted in voter suppression, though there is no data to back up her claims. Per her statement after threatening to sue Georgia over the way it conducts its elections, Abrams said: “I have no empirical evidence that I would have achieved a higher number of votes. However, I have sufficient and I think legally sufficient doubt about the process to say that it was not a fair election.”

No. In the Stacey Abrams speech following the election, the candidate blamed systemic racism, misogyny, and election rigging for her defeat, as well as voter suppression. Abrams lost by roughly 50,000 votes, but in her refusal to accept defeat, she has earned a national following of tremendous political value.

Abrams is not married and never has been. She has been asked this question numerous times over her political career, though she has never so much as hinted at any romantic relationships.

This has been speculated upon, although there is no evidence to suggest she is – or isn’t – a homosexual. Stacey Abrams’ sexual orientation remains a mystery (and a talking point) for voters and pundits alike

Is Stacey Abrams running for President?

Not in 2024. While there are rumors that Abrams will run for President one day, her intentions for 2024 have not been announced. That said, with a Democratic incumbent, it is highly unlikely that 2024 will be the year she decides to make a go for Washington, D.C.

Despite a seemingly Semitic surname, Stacey Abrams is not Jewish. Her parents were Methodist ministers, and she herself is likely a Methodist as well. However, she has been careful not to identify with any particular religion, merely calling herself a “person of faith.”

There is no evidence of Greek heritage in Stacey Abrams’ biographies or public records. There is similarly no record of any Stacey Abrams sorority affiliation, so it is altogether unclear how or why this became a question in the first place.

How tall is Stacey Abrams?

How much does Stacey Abrams weigh?

This information is not available online, though Abrams is by no means small. While her opponents have not used her weight – or its health implications – against her, online critics are quick to gut her for her “curves.” Speculation suggests Abrams weighs upwards of 200 pounds.

How old is Stacey Abrams?

Stacey Abrams is currently 47 years old. With a December 9 birthday, if she wins the White House in 2024, she would be 51 years old when she takes office as President in January 2025.