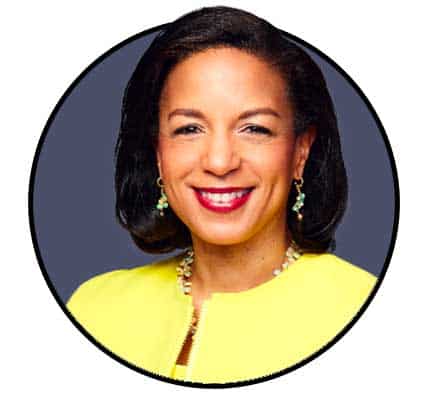 After spending a few years outside of the political spotlight, Susan Rice now finds herself amongst the leading candidates to become the Democratic Vice-Presidential nominee in 2020. Her African American heritage and female-status offer significant advantages in this political climate, and oddsmakers have taken notice.

Rice most recently served during the Obama administration as the United States National Security Adviser, a role she held from 2013 until 2017. Prior to that, she served as the US Ambassador to the United Nations, and the Assistant Secretary of State for African Affairs.

If you’re the betting type, and you’ve got a strong hunch that Rice will become the next Democratic VP nominee and run alongside Joe Biden, then you owe it to yourself to earn a massive payday by betting on her. The VP announcement could come at any time, so make your wager ASAP before the opportunity disappears.

Who Is Susan Rice?

Susan Rice is the former US National Security Advisor and has held many high-ranking government positions dating back to 1987. An academic all-star, Rice advanced through to her Ph.D. in Philosophy with ease, and quickly rose the ladder of American politics.

She is currently on the board of directors of streaming content titan, Netflix, and is working on a follow-up to her bestselling book, Tough Love: My Story of the Things Worth Fighting For. She is currently married with two children, a son, and a daughter.

Odds For Susan Rice To Be Vice President Nominee

Can I Bet On Susan Rice Now?

Not only can you bet on Susan Rice right now, but we recommend that you do so. The nominee for Vice President could be announced any day now, and when that happens, you’ll lose the chance to bet on Susan Rice and tell everyone, “I told ya so,” with a large wad of cash to prove it.

How Much Can I Win If I Bet On Susan Rice?

Since there is more than one sportsbook that is offering Vice Presidential election odds for Susan Rice’s VP nomination chances, a wise bettor should pick the betting line with the most advantageous payout. Bovada is offering the least likely odds of Rice getting the VP nod in 2020 and has given her a +6600 chance.

Since the odds are lower than other top-rated sportsbooks, a higher payout can be earned if a bet is made on Rice, and she wins. The max bet that Bovada will allow to be placed on Susan Rice’s VP odds is $18.93, which will earn a payout of $1,295 if she gets the nod, and you bet on it.

Born in Washington, DC, in 1964, Susan Rice has been surrounded by the world of politics for her entire life. A natural leader, Rice excelled throughout school and quickly advanced in the field of federal politics upon completion of her education.

In-between working high-level positions under the Clinton and Obama administrations, she excelled at a series of top-level posts with multi-million-dollar companies and started a lucrative writing career. Now, with Joe Biden and the Democratic party threatening to make a real run at the White House, it’s only natural that Rice’s name appears on the shortlist potential VPs.

Attack On The U.S. Consulate In Benghazi In 2012

On September 11, 2012, members of Ansar al-Sharia, an Islamic terrorist group, attached two US government facilities located in Benghazi, Libya, killing 4 Americans and 7 Libyans. The attackers used rocket-propelled grenades and assault rifles and used the cover of a protest to conceal their advance.

After the events concluded, it was revealed that several requests had been made for additional security at the US Consulate, which had been repeatedly denied by US Government officials. In an effort for the US Government to get ahead of the issue, Rice was given talking points regarding the attack and made several appearances on national television.

These statements that had been provided to Susan Rice contained many errors and inconsistencies, flaws that Rice was later called out for. Despite the erroneous comments not being attributed to her, she still carries that stain of Benghazi in her political baggage.

After an impressive academic and athletic high school career that included many club memberships, Susan Rice moved on to study history at Stanford University, earning a B.A. in 1986. Her academic success awarded her a Rhodes Scholarship, which she used to attain a Master of Philosophy from New College, Oxford, in 1988. Rice followed that up by achieving a Doctor of Philosophy from New College, Oxford, in 1990.

Why Susan Rice Could Be The Democratic VP Pick

Many of the candidates for the Democratic VP selection are women, suggesting that 2020 will be the year that a female is finally elected to serve in the White House. Susan Rice is also African American, which could provide a valuable boost from black voters on election day.

Rice has been heavily involved in the last two Democratic presidential regimes and was a member of Michael Dukakis’ Presidential campaign in 1988. She has years of top administrative experience and brings her Fortune 500 executive expertise to the political table, offering real-world knowledge that other politicians cannot compete with.

She knows the political process, has ins with the influential players of the game, and can get things done in the Nation’s Capital. The Biden Rice ticket has a promising ring to it and could offer up just the right pairing to unseat President Donald J. Trump this fall.

Although Susan and Condoleezza Rice share the same last name and have some similar facial features, they are not related to each other.

Yes, Susan Rice wed Ian Cameron in 1992 after they met in college at Stanford. Cameron is a producer with ABC News and originally hails from Canada.

No, Susan Rice is not biracial. Her parents are both African American, and she descends from Jamaican ancestry.

No, Susan Rice is not gay. She married Ian Officer Cameron in 1992, and the couple has two children, a son, and a daughter.

Where does Susan Rice live?

Susan Rice has multiple homes located across the United States, but she calls the state of Maine home. It has been rumored in the past that Rice intends to enter the Maine US Congressional race at some point, but that has yet to materialize.

What is Susan Rice’s job now?

Rice is currently working on her next book as a Distinguished Visiting Research Fellow at American University’s School of International Service. In 2018, Rice accepted a position with video streaming juggernaut, Netflix, where she is currently on their board of directors.

How did Susan Rice get her wealth?

Susan Rice has had a long and distinguished career in politics, has served on the boards of many top companies in America, and is the author of best-selling books. These three avenues have provided her a path to attaining Rice an estimated net worth of $50 million.