Odds To Win The Republican Nomination 2020

Odds To Win The Republican Nomination 2020

Republican Odds To Win The 2020 Primary Nomination And General Election 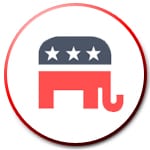 2020 Presidential Election Update (11/4): Republican incumbent Donald Trump looks like he will lose reelection, but there are still votes coming in from several important swing states, and you can bet on these outcomes at the best Presidential election betting sites. Additionally, there are guaranteed to be recount odds, betting lines on court challenges, and more as the election is finalized and settled nationwide.

Even as the nation remains largely divided, politics are becoming increasingly woven into the fabric of our betting culture. You will find that most of the reputable online sportsbooks include lines and odds for betting on the Republican primary in their menu.

While you may not see these options in Vegas or Atlantic City, licensed offshore betting sites are embracing the popularity of political betting odds and predictions. Hence, betting odds for the Republican nomination have gained newfound momentum.

Market predictions, polls, and odds work collaboratively to give political bettors everything needed to make informed bets on the Republican primary. Here, you will find all the information you are looking for to place informed wagers on this election, including the latest Republican Primary betting odds,  the status on each of the Republican 2020 Presidential candidates, and where they stand on hot-button issues.

Other Candidates With Presidential Nomination Odds

The 2020 Republican National Convention took place in Charlotte, North Carolina with remote speakers taking the stage to pledge their allegiance to President Trump. On day one, President Trump flew to Charolette to accept the nomination, there he delivered his first of four speeches. Later on day one, the Convention continued with prominent speakers, including Nikki Haley, Donald Trump Jr., and Michael Steele.

The RNC will span over four days with speakers taking the stage all four days. Other speakers include Ivanka and Eric Trump, Melania Trump, Kelly Anne Conway, and Mitch McConnell just to name a few. The RNC will be broadcast on all major media outlets and available for streaming.

In President Trump’s first major speech since leaving the Oval Office in January, he hinted at a 2024 run while also laying out his potential

February has been particularly tough on Ted Cruz’s home district of Texas. Frigid winter storms have blanketed the area with snow causing massive

What types of bets are available for betting who will become the Republican nominee?
When betting on the Republican primary, you will have a handful of bet types and wagering options to choose from. The most commonly offered lines include betting on who will win the Republican nomination; will the winner be male or female; who will be chosen as the Republican VP; and who will win the various swing state caucuses. Within these types of lines are wagering options such as handicapped bets (beating the spread) and over/under bets (where the winner will land in regards to the predicted number of votes), among others.
Who can bet on the 2020 Republican primary?
In most states, anyone who is 18 years of age or older is eligible to bet on the 2020 Republican primary. Some states do enforce a minimum gambling age of 21. You don’t have to be affiliated with any particular political party. You don’t even have to be a registered voter. Betting on political events such as party primaries and general elections can be very entertaining, and as it gains popularity, we are seeing more and more Political prop bets and creative wagering lines emerge at sportsbooks. Those who are interested in politics and find it intriguing to follow will likely be the ones who really get into betting in this niche.
Is it legal to bet on the Republican primary?
To be perfectly honest, we would have to say the answer to this question is yes, and no. It really depends on where you are placing your bets. There are no US gambling laws that prohibit you from betting on politics at licensed and regulated destinations that are located outside US borders. You will not find legal US-based political betting options, so if you are trying to place a bet on who will win the Republican nomination in Vegas or elsewhere in the US, you will be out of luck. There are a number of legally licensed and regulated offshore sportsbooks that welcome US players and offer competitive political betting lines and odds through a secure and high-quality gambling site. You can find a listing of those options on this page.
Where can I bet on who will win the 2020 Republican nomination?
You have the option of betting at numerous online sportsbooks that are legally sanctioned and licensed to offer their services to US players. We do caution you to consider limiting your betting action to those destinations that have been vetted by industry professionals. Not all US friendly sportsbooks offer a secure and quality experience. Professional gambling analysts who are qualified to verify the legitimacy of an online gambling operation, as well as, the quality of their services have carefully reviewed all our recommendations. Each site we recommend is legally licensed and regulated, employs a sophisticated security profile, offers an efficient banking suite with fast payouts, and delivers extremely high-quality services and support to players.
Do any of the Republican presidential candidates support online gambling?
To our knowledge, none of the candidates engaged in the Republican primary are supporters of online gambling. For the most part, online gambling has not been discussed by the Republican candidates, so we are not clear on where they stand. Both Rubio and Bush have expressed negative views of gambling, so we’re pretty sure they will not be on board to support the expansion of online gambling in the US. The rest of the Republican field has just not said much on the matter. Should any candidate come out in favor of legalizing online gambling, it could potentially affect the 2020 Presidential election odds as some voters will be strongly against the idea, while others who actively participate in gambling appreciate the fact that the government shouldn’t dictate how we spend our hard earned money. When considering the future presidential election is it also important to understand how the Senate majority plays a role in potential political progress for Republicans.

Other Political Parties And Candidates