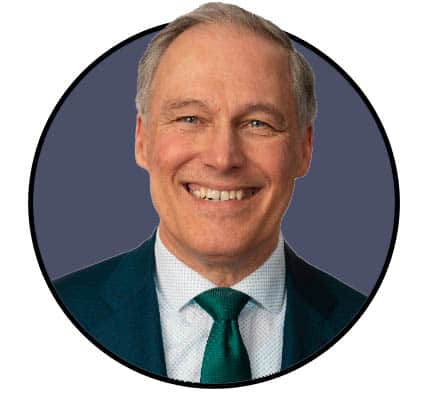 Who Is Jay Inslee?

Jay Inslee is a 68-year-old Democratic Governor for Washington state since 2013. He officially announced his run for the 2020 Presidential Election on March 1, 2019. But due to a lack of voter supporter, Inslee took to The Rachel Maddow Show on August 21 to announce that he would be leaving the presidential race. Instead of seeking the 2020 presidency, Inslee has opted to run for a third term as Washington governor.

At this moment, we are speculating Jay Inslee’s targeted base. After his campaign develops our guide will be able to pinpoint his exact voter base:

Odds for Jay Inslee to win the 2024 Presidential Election

Oddsmakers and sportsbooks have let Jay Inslee’s odds to win the Presidency in 2024 slip. At this time, Inslee has no odds available likely because he is not the most recognizable name in the candidate’s list and certainly has not done much to increase awareness on his campaign. However, as his campaign develops he may gain traction.

At this moment, odds are not yet made available for Inslee’s likeliness to win the Democratic nomination. Likely due to the fact that several more notable Democratic candidates are still in the race. However, this may not help him in terms of gaining more recognition as other candidates even those who have not announced are gaining more attention by oddsmakers than Inslee.

The current odds imply a general viewpoint that sportsbooks are not confident in Jay Inslee compared to other Democratic candidates in directly facing Trump for the 2020 Presidential Election. Inslee will have to fight for his recognition and build his campaign out more with awareness and unique policies.

Jay Inslee is running on a primary campaign policy of providing effective and immediate Climate Change relief, his stance in fighting Climate Change has been a long-standing project since his Congressional days in 2007. Inslee hopes to convert our energy dependent efforts 100% over to natural and clean burning energy. Inslee has also resurfaced earlier comments on his stance regarding tighter Gun Control Regulations in his interviews and it will likely comprise a portion of his campaigning policies. At this moment, the Washington governor has yet to list his campaign policies on the Jay Inslee 2020 campaign site other than his Climate Change efforts.

Inslee has a voting record supporting policies for LGBT+ Rights, Abortion Rights, and Environmental Protection and Preservation. Looking at the most recently voted on policies during his time as a U.S. representative of Washington, Inslee voted for the Repeals Department of Education Regulations, Extends Payroll Tax Cut, Conference Report Adopted, and a bill which Prohibits Insider Trading by Government Officials. In that same year of 2012, Inslee voted against the Water Resources in the Sacramento-San Joaquin Valley, and the Authorizes Development of Oil Shale Resources.

After graduating college, Inslee worked for the Peters, Schmalz, Leadon & Fowler law firm as a city prosecutor. He began his political career in 1989, where he faced an uphill battle as a Democrat running on Republican turf. However, he won his seat as a Representative of the House from 1989 until 1993.

In 1992, Inslee ran for Washington’s 4th Congressional District seat and won, beginning his representation in 1993. In 1994, Inslee lost his seat against Doc Hastings during the 1994 Republican Revolution – he in part blames his vote for a Federal Assault Weapons Ban for his defeat.

In 1995, Inslee ran for Congress representing the 1st Congressional District and won. Inslee held his position for several reelection cycles. In 2012, Inslee left Congress to focus on his bid for the state’s Governorship. Inslee won his bid in 2013 and remains as Governor of Washington after winning his reelection in 2016.

Inslee first attended Stanford University for their medical program but later dropped out after having not received a scholarship to attend. Inslee later enrolled at the University of Washington where he graduated with a Bachelor of Arts in Economics in 1973. Inslee later studied at Willamette University School of Law and earned his Juris Doctor (J.D.) in 1976.

While the records are spare for Inslee’s involvement in the local community, there are several organizations and pet-projects he is involved in. In 2011, Inslee received the “Friend of the National Parks” award by the National Parks Conservation Association. Inslee is also a sponsor of the Civic Learning Initiative implemented by the state’s Council on Public Legal Education, modeled after California’s civic program.

Gambling is under tight wraps in the Evergreen state, and Governor Jay Inslee has yet to make a public comment on it saying they will wait for the recommendation of the state’s Gaming Commission. However, looking at Inslee’s previous voting record regarding gambling we can see he voted for the Bay Mills Indian Community Land Claim Bill, the Native Hawaiian Reorganization Act of 2007, and the Online Gambling Ban Amendment. Inslee voted against the Restricting Indian Gaming to Homelands of Tribes Act, the Internet Gambling Bill, and the Unlawful Internet Gambling Funding Prohibition Act. These votes elude to an anti-gambling stance.