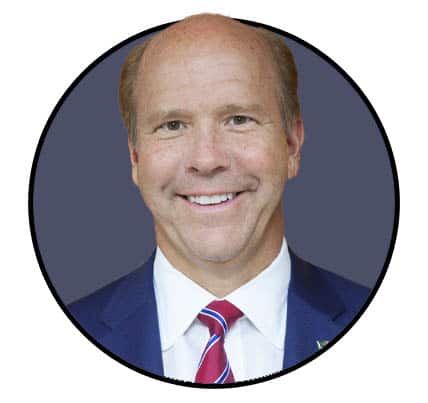 Who is John Delaney?

John Delaney is an American politician and businessman. He served as the U.S. Representative of Maryland’s 6th Congressional District from 2013 until 2019. He announced his run for the 2020 Election on July 28, 2017 as a Democrat. Prior to his run in politics, Delaney was a successful entrepreneur that co-founded two companies that were publicly traded on the New York Stock Exchange. As CEO of CapitalSource at the time of his election to Congress, he became the only CEO of a publicly traded company to serve in the 113th United States Congress.

Like many Democrats, Delaney seeks support from women, minorities, and the LGBT communities. But Delaney, as a moderate-leaning candidate, attracts support from centrist Democratic voters because he describes himself as “a solutions-oriented moderate who wants to get things done.” A tentative list of Delaney supporters is below:

Odds for John Delaney to win the 2020 Presidential Election

Delaney’s chances of facing Trump in the 2020 election are slim to none. The Maryland representative struggles to get odds on making it to the election, but the chances he is given by certain sportsbooks are longshots. With Delaney’s limited experience in politics and low name recognition, coupled with a crowded field of front runners, it will be hard for him to beat incumbent Trump.

Like his odds of winning the 2020 election, Delaney has low odds of earning the Democratic nomination. With favorites like Elizabeth Warren, Joe Biden, and Bernie Sanders, Delaney will have a difficult time taking over the party’s lead and earning the nomination. However, there is still time for Delaney to campaign and earn more support from voters before the Democratic nomination is set.

Can I Bet On John Delaney Now

If you think Delaney stands a chance at winning either the DNC nomination or the Presidential election in 2020, you should definitely consider logging on to a reputable sports betting site and plunking down a few dollars.

With long-shot odds, Delaney’s payout potential doesn’t have much higher to go on the boards. By wagering on him while he’s such a massive underdog, you can guarantee a windfall on the off chance he wins. Political futures betting can be risky, but a well-timed bet on a dark horse candidate like Delaney can yield a boatload of Benjamins.

With such low odds, Delaney is still considered a huge underdog to Trump, making him one of the least likely Democrats to directly oppose Trump in 2020. He’s got quite the climb to be taken as seriously as Warren, Biden, or Sanders, but there’s still some time for his campaign at this point. Delaney is still working hard to win Americans over, or at least for them to remember his name.

John Delaney’s Chances Of Winning Based On Prediction Markets

Delaney never performs very well in numbers, whether it’s national polls or prediction markets. On Predictwise, Delaney has a 0% chance of claiming the Democratic nomination, which puts him as low as Julian Castro, who is no longer running.

Prediction markets give a good indication on candidates’ chances, which proves Delaney is in for a tough road if he continues his campaign.

Delaney’s running Presidential Campaign policies center around reversing the division Trump has brought to this country. Delaney hopes to unite America by fixing institutions of education, healthcare, infrastructure, retirement, and the criminal justice system. Other policies and issues he will represent include reforming the “corrupt” campaign finance system, overturning Citizens United (which was already upheld by the Supreme Court), end gerrymandering, end government corruption, and numerous other unlikely or outright impossible initiatives that sound good on paper.

Looking at Delaney’s past voting record on various policies presented we can determine he is Pro-Choice, supports Same-Sex Marriage, has voted for enforcement Against Anti-gay Discrimination in public schools, Women’s Rights, and advocated for the legalization of Cannabis. Delaney’s proposed and previously supported policies also center the US in becoming a global leader in Domestic Energy Production (which it already is) and Alternative Energy Technology, Protecting Victims of Domestic Violence, supported providing Paid Paternal Leave for Federal employees, and fighting Climate Change.

Delaney co-founded Health Care Financial Partners (HCFP) in 1993, which provided loans to small-sized healthcare providers often overlooked by large banks. After HCFP went public and was acquired by Heller Financial in 1999, Delaney moved onto his next project where he co-founded CapitalSource, a commercial lender, in 2000.

Delaney remained with CapitalSource as a CEO, where the company earned multiple awards like the Bank Enterprise Award from the Community Development Financial Institutions Fund by the U.S. Treasury Department until he began his political career. In 2014, CapitalSource was absorbed by the PacWest Bancorp.

Delaney began his political career in 2012 by running for U.S. Representative of Maryland’s 6th Congressional district after it was redistricted. He won the seat in 2013 against 10-term Republican incumbent Roscoe Bartlett and flipped a historically red-seat, blue. Delaney served as Maryland’s U.S. Representative until January 3, 2019.

Delaney graduated from Columbia University in 1985, earning himself a bachelor’s degree. Delaney then went to the Georgetown University Law Center and earned his Juris Doctor JD in 1988. In 2015, Delaney received an honorary Doctor of Law degree from Washington College.

While Delaney has not publicly made it known whether he supports or opposes gambling there are some available clues we can draw from. Like Tulsi Gabbard, John Delaney received an invitation to AEI’s Annual Closed to the Press Retreat, Quality of Disclosure 2017-2018, a neoconservative right-aligned media outlet with strong ties to Republican ideals, donors, and individuals. Being a Democrat, it is strange to see that John Delaney was only one of three Democrats invited to the event, including Tulsi Gabbard and Cory Booker.

While we’ve identified Gabbard’s ties to Sheldon Adelson, there seems to be an indirect link between the land-based casino mogul and Delaney. To further assess Delaney’s stance with gaming policies we must acknowledge Delaney voted against an Act to amend the White Mountain Apache Tribe Water Rights Quantification Act of 2010 which would have allowed tribes more control over their economic destiny, with a possibility of tribal gaming expansion.

How Much Can I Win If I Bet On John Delaney?

As bottom-tier candidate within the Democratic Party, Delaney’s odds of winning are not favorable. But with this risk comes the chance at a huge payout. Although Delaney does not have presidential odds on some sportsbooks, he usually has registered chances for the Democratic nomination.