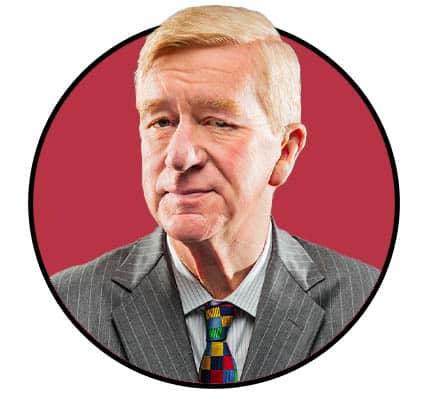 Who is Bill Weld?

Bill Weld is a 73-year-old Republican who was the governor of Massachusetts from 1991-1997. He ran for vice president as an independent in 2016 on the Gary Johnson’s Libertarian Party ticket. Weld announced his 2020 Presidential campaign April 15, 2019 and became the first notable challenge to President Donald Trump for the Republican nomination.

Weld attracts support almost exclusively from the Republican Party. As a Trump critic with libertarian-leaning ideology, Weld has voter support from third party members and Republicans displeased with Trump’s direction. As time goes on for his campaign, and Trump’s impeachment inquiry plays out, Weld could earn even more support before 2020.

Odds For Bill Weld To Win The 2020 Presidential Election

There are currently no odds available at our recommended online sportsbooks. We will update Weld’s 2020 general election odds when they’re actually posted. Nevertheless, Weld is considered a longshot to win the 2020 presidency, regardless of a Trump impeachment/removal.

Bill Weld’s dds to win the GOP nomination have been posted, and they are currently sitting at +8000. This means that if you put up $100, you would win $8000 if Weld gets the GOP nod.

Bill Weld continues to run for President for some reason. Perhaps “run” is too strong a word. But even as the coronavirus hype threatens to derail Donald Trump’s re-election campaign, Weld has not benefited on the odds boards. Instead, his position remains the same: dead last in every poll, prop, and betting line.

Indeed, the only GOP “candidate” to make gains on the odds boards due to the US coronavirus crisis is current Vice President Mike Pence, who isn’t even running for the post. Pence’s odds are sitting at +1600 to be the GOP nominee, up from about +8000 a week ago.

Meanwhile, Weld is welded to the caboose: His GOP odds have dropped to +10000, and his overall odds to win the Presidency haven’t moved an inch in months from their +50000 low. For further information on how the pandemic is affecting the state primaries and the general election see our Election odds impact of the Coronavirus in the USA page.

Can I Bet On Bill Weld Now?

Only Bovada is currently offering odds on Bill Weld, which means that some folks somewhere are actually betting on the guy. And that means that you can, too. Of the announced GOP challengers to Trump’s re-election, Weld’s odds have the most value. However, the likelihood of his nomination is slim even if The Donald drops out or is otherwise removed from office.

Bill Weld has effectively no chance to win the GOP nomination, and sportsbooks aren’t even offering lines on his chances in the general. Anything could happen, but at +8000 to win the Republican ticket, those odds seem far too moderate to be worth the risk. Weld should be trending at +50000 or higher, though bettors are apparently putting action on his current price.

Bill Weld’s Chances Of Winning Based On Prediction Markets

Unfortunately for Weld, he has little chance of winning the Republican nomination. Prediction markets, such as Predictwise, don’t even give the Trump challenger any odds of success.

For comparison, Trump has an 89% chance of earning the Republican nomination again. Pence is second with 3%.

Weld’s current campaign is being run on as a return back to conservatism that puts fiscal responsibility and free trade as its cornerstones. Additionally, he favors immigration reform but vehemently opposes building a wall along the US-Mexico border. He also opposes Trump’s campaign promise to deport undocumented immigrants. Weld is also in favor of the legalization of marijuana. To learn more about his policies you can visit his official website here.

Weld ran as governor of Massachusetts during the 1990s to put less of a tax burden on residents and found different revenue sources for the state. He was extremely tough on criminals in the past and at one point supported the death penalty for murderers of police officers. He’s one of the few pro-choice conservatives when it comes to abortion and has long supported gay marriage. While he has recently stated that substance abuse cases should not be sent to prison, he had previously been a proponent of less welfare and tougher sentences for drug users and offenders.

After graduating from both Harvard and Oxford, Weld served as legal counsel to the US House Committee on the Judiciary. He then became the US Attorney for the District of Massachusetts and went on to become the US Assistant Attorney General for the Criminal Division.

He was a notable figure in several high-profile cases on corruption and then, out of protest of an ethics scandal investigations into the sitting attorney general, he resigned as assistant attorney general. Weld ran and won the Massachusetts gubernatorial election two years later.

Weld graduated from Harvard University with a Bachelor of Arts Degree in classics in 1966. He then went on to study economics at Oxford before attending and graduating from Harvard Law School with a Juris Doctor degree in 1970.

We could not locate any information on Weld’s past work with volunteer and/or charity organizations, but this does not mean he does not partake in civic work.

During his time as a US attorney, Weld had opposed gambling, but when he took over as governor of Massachusetts pressed lawmakers to expand the state’s legalized gambling to increase the tax revenue by nearly $100 million.

Additionally, Weld gets credit for bringing tribal and commercial casinos to Massachusetts. Before he became governor, the state lottery and horse/dog racing were the only forms of legalized gambling allowed. Needless to say, Weld is pro-gambling.

How Much Can I Win If I Bet On Bill Weld?

As of right now, you can get +8000 odds on Weld to win the GOP primary. If you bet $1000 on him at those odds, you could walk away with $80,000! However, we don’t advise betting more than $10 on the longshot candidate, as there are better odds to put that money toward.