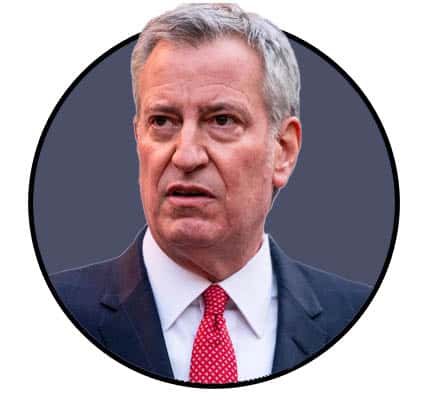 Who is Bill de Blasio?

Bill de Blasio is a 58-year-old Mayor of New York City who has served as Mayor since 2014. Born in Manhattan, New York City Bill de Blasio married Chirlane McCray in 1994 and has been married to her since. Bill de Blasio announced his 2020 presidential campaign run on May 16, 2019. Unfortunately for de Blasio, he was not able to gain much traction in the race and officially ended his campaign on September 20, 2019.

At this time, we can only speculate the type of voter Bill de Blasio is attempting to appeal to. As his campaign progresses, we will update this section with more accurate information:

Currently, de Blasio’s odds to win the presidency in 2024 are slim. As a longshot candidate, no sportsbooks give de Blasio a real chance of making it into the White House. However, this can change if Bill de Blasio can prove his worth and stand out amongst other Presidential candidates.

Sportsbooks find it unlikely that Bill de Blasio will win the Democratic nomination after he has entered the race so late and now must contend against more prominent Democrats with better name recognition and polling numbers. However, oddsmakers may throw de Blasio a bone and give him better odds if he can scrounge up some media focus and positive attention.

According to the books, Bill de Blasio has no chance of winning the 2020 presidential election. The lateness of his campaign announcement and the challenge to gain the limelight from names like Biden, Bernie, and Buttigieg may all contribute to the lack of favorable odds for the NYC mayor. Nonetheless, there is the possibility that bookmakers will give de Blasio better odds to win 2020 if something big changes soon.

Bill de Blasio’s Chances Of Winning Based On Prediction Markets

In Bill de Blasio’s Presidential run announcement video, he criticized the economic struggles and issues in this country, stating “there’s plenty of money in this country, it’s just in the wrong hands.” De Blasio increased the minimum wage to $15 in NYC, which some think may become part of his running policies. De Blasio has also commented on being against NAFTA and the Trans-Pacific Partnership.

De Blasio will likely adopt his idea for a national single-payer healthcare plan which includes undocumented immigrants for a running policy.

De Blasio recently announced efforts to create the Climate Mobilization Act, which is like his own Green New Deal which bans glass and steel skyscrapers in NYC. Landlords and homeowners would be required to retrofit buildings by 2024 or face hefty fines. Some buildings would be forced to put wind turbines, plants, solar panels, or a combination of all three on their roofs. The New York Times estimates the act will cost almost $4 billion. Some have criticized Bill de Blasio over this Act saying he is not supportive of social mobility and the working class, by increasing costs in the nation’s most expensive city.

As Mayor, de Blasio signed NYC’s universal pre-K program that enrolls 70k NYC kids into pre-k systems. As Mayor, he signed a paid sick leave and safe leave plan into law, one of his signature accomplishments. He also pushed to make New York City as a sanctuary city for undocumented immigrants.

De Blasio’s early political career started in the 1980s and served as regional director for the Department of Housing and Urban Development, as well as, and managed Hillary Clinton’s Senate campaign. In 2002, Bill de Blasio joined the NYC Council until 2009. In 2010 until 2013, de Blasio served as an NYC Public Advocate. In 2013, Bill de Blasio ran for the seat of New York City Mayor and in 2017 won his re-election campaign as mayor. In 2019, de Blasio announced his run for the Presidency.

In 1979, Bill de Blasio graduated from Cambridge Rindge & Latin School in Cambridge, Massachusetts. De Blasio served in the school’s student government. He earned a Bachelor of Arts degree from New York University. De Blasio’s major was in metropolitan studies, a program in urban studies. He later earned a Master of International Affairs from Columbia University’s School of International and Public Affairs.

At this time, records of Bill de Blasio’s volunteerism, civic work, or social activism cannot be found. However, this does not mean that de Blasio has not participated in these activities rather that they cannot be located by our team currently.

Regarding de Blasio’s feelings toward gambling, the NYC Mayor was quoted saying that, “Gambling always makes me queasy because I think for a lot of people it’s an addiction … It’s hard to get entirely excited about it.” In an interview with NY1, de Blasio referred to the Supreme Court ruling of PASPA. “We have to look at it clinically…If the new legal reality is this is going to be allowed everywhere, we have to obviously think about what it means for New York City and how to play the appropriate role. But, you know, it’s one of those realities that should be looked at with a certain amount of caution in my book.”

De Blasio continued his interview by relating what he associates gambling to, which is “addiction”. Bill de Blasio is mainly concerned with the negative effects of gambling over potential revenue. Thus we label him as a staunch anti-gambler.

How Much Can I Win If I Bet On Bill de Blasio?

Since de Blasio is such an unlikely winner, his odds of winning the Democratic nomination or United States presidency are terrible. But with that, a small bet could pay out huge if he does win. A $100 bet on de Blasio’s party nomination odds would result in $15,000.

If $100 was placed on his POTUS odds, a bettor could win $50,000 with de Blasio claiming the presidency.