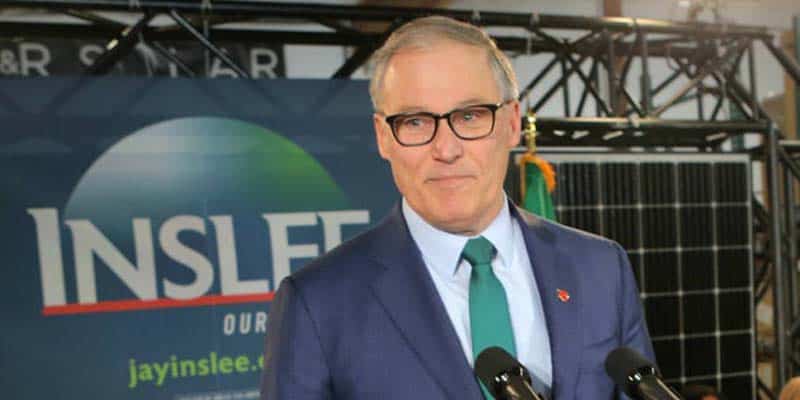 The 23rd Governor of Washington formally launched his 2020 presidential campaign in March 2019 with a focus on fighting climate change.

But due to lack of voter support, Inslee decided to drop out of the race. After announcing his departure Wednesday night on MSNBC’s The Rachel Maddow Show, sources close to Inslee claim he will run for a third term as governor in Washington.

“It’s become clear that I’m not going to be carrying the ball. I’m not going to be the president, so I’m withdrawing tonight from the race,” Inslee said. “I think [Democrats] are going to be just fine ultimately. We just need to get to the business of unifying the party. I believe we will do that.”

Before backing out, Inslee only had +10000 odds to win the Democratic nomination.

Inslee is the third candidate to drop from the race since the debates started in June. Although Inslee claimed on Twitter that he reached the 130,000-donor requirement set by the DNC, he was not able to get 2% support in four qualifying polls, keeping him out of the September debate and essentially ending his campaign for him.

130,000 donors rallying behind our #ClimateMission.

The is an historic moment. I am honored by your support. Thank you

The other two Democrats, Rep. Eric Swalwell, and former Colorado Gov. John Hickenlooper made their exits after failing to garner the necessary support from voters.

Inslee’s campaign is not a total loss, however. Inslee requested form the DNC that a debate be dedicated to focus on the climate crisis. Despite not fulfilling his request, CNN has scheduled a town hall meeting with ten Democrats to discuss climate change.

His focus on climate change has also influenced other candidates. Sen. Bernie Sanders, Sen. Elizabeth Warren, and Sen. Kamala Harris all praised Inslee and his passion for combating the climate crisis.

“Thank you [Inslee] for fighting every day to make sure that climate change remains a primary focus of this election,” Warren said in a tweet.

Sanders echoed the sentiment: “Congratulations to [Inslee] on his impactful campaign to bring the climate crisis to the forefront of the national conversation.”

Congratulations to @JayInslee on his impactful campaign to bring the climate crisis to the forefront of the national conversation. There is no more important issue facing humanity. Together we will work to pass a Green New Deal and create millions of jobs.

Thank you @JayInslee for fighting every day to make sure that climate change remains a primary focus of this election. Climate change is real and it's a crisis—and I will keep fighting alongside you to take bold action before it is too late.

Few leaders have done more to shine a light on the climate crisis than @JayInslee. His voice will be missed in this primary but I know he will continue this fight.

To qualify for the September debate in Houston, candidates must have 130,000 donors and 2% in four polls before the August 28 deadline. So far, only ten Democratic hopefuls have made the cut:

As the field shrinks, each candidate’s odds will become more important. An updated list is below featuring both Democrats that have and have not qualified for the third debate.