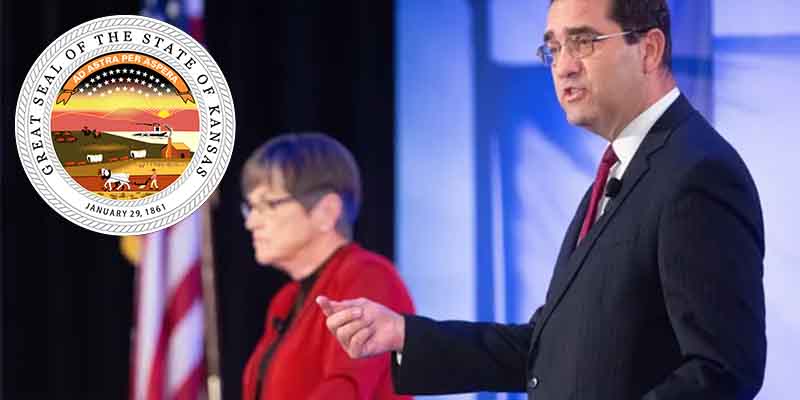 While most 2022 state Governor elections feature odds that suggest a blowout victory, there are some lines for betting on Gubernatorial elections that imply some races could go down to the wire.

States like Florida and Georgia feature heavy favorites with four-figure leads in the latest political election odds, but candidates in the following three regions are neck-and-neck at online sportsbooks and in the polls.

Those results are not reflected in the betting odds for the next Kansas Governor, as both Governor Kelly and KS Attorney General Schmidt are tied with a -120 moneyline.

While election betting enthusiasts may recognize that the above line is suggesting both candidates have a chance of winning that is above 50%, in reality, sportsbooks are hedging the odds so that they can guarantee a profit no matter who wins.

What makes election betting in Kansas so difficult is that they often flip from red to blue. Gov. Kelly is a Democrat, but the prior two Governors of KS were members of the GOP. Those that want to lay some action on this race should hold out to see if your preferred candidate draws a positive moneyline between now and Tuesday.

Betting On The Next Oregon Governor

The Gubernatorial odds for political betting in Oregon suggest that Drazan holds a significant lead, but the state has not elected a Republican Governor since Victor Atiyeh won his second term in 1983.

Why are online election sportsbooks projecting that Oregon will flip from blue to red? Signs are pointing toward the growing crime and homelessness epidemic in Oregon as a motivating factor.

Still, given the dominance of the Democratic Party at the Oregon State Capitol, bettors should be enticed by the +145 moneyline odds for Tina Kotek to win.

A wager of $100 on Kotek, the former speaker of the Oregon House, will win $245 – a healthy payout for a state that has elected DNC Governors for the past 30+ years.

The next closest Governor race on the election betting boards is in Wisconsin, where challenger Tim Michels (R) possesses a 405-point lead in the above political prop bet over incumbent Tony Evers (D).

WI is a state that has historically elected both blue and red candidates, but what may intrigue political gamblers is that current polls feature both Michels and Evers in a dead heat.

Governor Evers’ odds to win are set at +165, an underdog status that will pay out well if he wins reelection next Tuesday. No betting gains can be secured without laying some action at political sportsbook sites between now and November 8th, so cruise over to one of our featured election gambling sites before the odds expire.