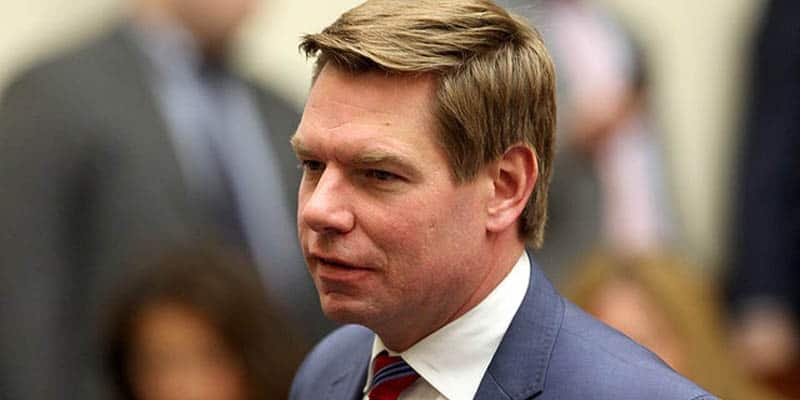 The flame on Swalwell’s torch is officially out.

Rep. Eric Swalwell (D-CA) announced that he was ending his 2020 presidential bid due to a lack of traction since he began his run in April. He does plan, however, to continue his tenure in Congress.

“I’m fired up to do that work that I’ve already been doing in the Congress,” Swalwell said during his announcement on CNN.

Swalwell became a member of the U.S. House of Representatives from California’s 15th district in January 2013, beating out incumbent Pete Stark.

On April 8, 2019, Swalwell announced that he was running for president while on The Late Show with Stephen Colbert.

While he never had favorable odds to become president — Bovada had his odds at +10000 to become the Democratic nominee before his announcement Monday — Swalwell did make a couple of headlines with his quote from former Vice President Joe Biden (+375 to win the nomination).

During the first Democratic debates in June, Swalwell recounted a story during his childhood in California.

“A presidential candidate came to the California Democratic convention and said it’s time to pass the torch to a new generation of Americans. That candidate was then-Sen. Joe Biden.”

Swalwell barely made the stage for the debate as he did not generate the required fundraising required for admittance to the June debate, but still qualified due to the polling 1% requirement.

The next Democratic debate on July 30-31 requires candidates to amass 65,000 unique donors. This likely would have forced the California representative out anyway.

The increasingly difficult criteria will force more candidates out by the Democratic debate in September.

Candidates must have 130,000 unique donors and reach 2% in four separate polls before qualifying.

Despite the requirements essentially ending his run for the presidency, Swalwell agreed the stringent criteria was a good decision by the DNC.

Swalwell made himself available to the media but still could not gain the necessary attention to stand out amongst the Democratic field.

A strong opponent of gun violence, Swalwell says he will not formally endorse another candidate until he determines “who will elevate the issue of gun violence as their top issue.”

And even though Swalwell has bowed out of the running for the Democratic nomination, here are the latest odds for the remaining candidates.