What’s In A Name? A Running List Of Donald Trump Nicknames 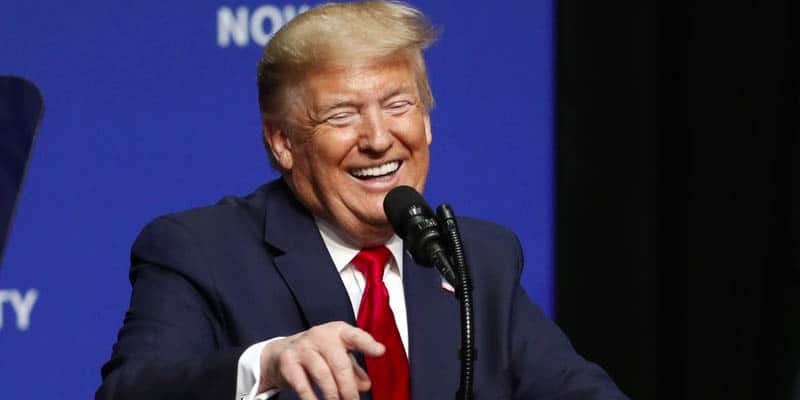 Love him or hate him, Donald Trump is very adept at marketing his brand. In the private sector, the skill earned him billions and widespread adoration. In the political sphere, it’s earned him a massive following of partisan fans and billions of dollars of free media coverage. Some might argue that the Trump Nickname phenomenon earned him the US Presidency in 2016.

Of course, for a nickname to stick, it’s got to be pertinent to the subject, easy to digest, and amusing to repeat. Trump has mastered the art of levying such monikers on those who oppose him, and we’re keeping a running list of Trump’s nicknames – both those he foists on others as well as the public’s nicknames for President Trump himself.

This list is a work in progress, as each new day of Tweeting brings with it the potential for a new target to be dubbed Cheatin’, Lyin’, Stealin’, and so on.

While political betting sites probably won’t ever offer odds on Trump’s new nicknames – who knows what he’ll come up with next! – it’s good to have a little levity when you’re trudging through the mire of American politics.

So check out some of these amusing, cringey, and insulting Trump nicknames, and have a laugh on us! And remember: We can’t promise to include all of Trump’s nicknames, as the tally is pretty long at this point, but we’ll do our best.

As Trump’s chief 2020 rival, Biden is first on the list. There isn’t just one Trump nickname for Joe Biden, as is often the case. Some of the President’s favorites are:

Biden has also received a smattering of nicknames from the public, including Alzheimer’s Joe and Dementia Joe, stemming from his near-constant penchant to flub pretty much everything and misstate facts with every citation.

As Joe Biden’s son and one of the chief players in the Ukraine scandal that led to Trump impeachment, the younger Biden hasn’t been shielded from the nickname game. He only has one, but it’s a doozy:

Trump’s Hunter Biden nickname was coined after the younger Biden disappeared from the public during the Ukraine probe and a summary paternity suit (which he lost).

When Michael Bloomberg joined the 2020 Presidential Primary on the Democratic side, he immediately started a flame war with Donald Trump. Due to the candidate’s small stature, Trump’s nickname for Bloomberg was tailor made (just like the latter’s tiny suits):

Despite Mini Mike Bloomberg spending maximum money on his campaign (the most in US history by a wide margin at nearly $600 million), in the end, he shrunk from the limelight, living up to his moniker in every way.

If Bush is Bush Original, that must make Dubya Bush Light. And nobody likes that garbage.

In the 2016 Republican primary cycle, Trump famously called out the meek and wishy-washy Jeb Bush, tagging him with a clunky nickname that’s stuck ever since:

While the Trump nickname for Jeb Bush isn’t one of his best, it has become one of his most iconic, as it wrapped up the way the entire GOP voter base felt about the candidate.

Trump also called Buttigieg Boot-Edge-Edge in response to the candidate explaining how his last name is pronounced. That one was a bit of a flop, truth be told. Still, tyrants do like to put the edges of their boots on people’s throats, and Buttigieg seems prone to tyrannical fantasies.

While The Donald had many names he liked to use on Hillary Clinton, the one that stuck – and the one that remains in use to this day – is this:

While Clinton’s supporters disagree with the assertion, the former First Lady and 2016 Presidential runner-up has been the center of even more scandals that Trump himself. Other Trump nicknames for Hillary include Crazy Hillary, Heartless Hillary, Lyin’ Hillary, and Skank Hillary. That last one seems…inaccurate (or, at least, skin-crawlingly unfathomable).

James Comey, as the former Director of the FBI, was fired by Trump after allegedly orchestrating an illegal scheme to wiretap the Trump campaign and spy on those associated with the incoming Trump administration. During that process, it came to pass that Comey himself was leaking many of the Bureau’s investigation updates to the press. Thus, Trump’s nickname for James Comey is an apt one:

Though staunch allies now, Trump and Cruz were major rivals in the 2016 GOP primaries, at which time Trump popularized the nickname that would come to define Cruz for the duration of the campaign:

Omarosa Newman was a former contestant on Donald Trump’s The Apprentice reality show, and he gave her a job as an aide upon his ascension to the White House. Newman quickly and very publicly flamed out before writing a tell-all book that nobody read, earning her Trump nickname in spades:

As one of the chief architects of Trump impeachment, Jerry Nadler has been a thorn in the side of the Trump presidency from Day One. And because he’s such a portly fellow, Trump’s nickname for Jerry Nadler was one of his easiest creations:

The former President has been a vocal critic of the Trump presidency, and the feud between the former and current POTUS started long before The Donald won in 2016. Trump was, after all, one of the earliest proponents of the “birther” theory that Obama was born not in the US but in Kenya, leading to Obama’s eventual release of an allegedly veracious Hawaii birth certificate. Trump’s nickname for Obama is one of the more disappointing and uninspired on this list:

Alexandria Ocasio-Cortez, freshman House member from New York and anti-Trump extraordinaire, usually goes by AOC. However, the Trump nickname for AOC is particularly biting, as it has historical analogs to consider. Nobody perceives Trump to be a student of history, but for AOC, he reached into the archives and pulled out the following:

In this case, the public has come up with a better nickname for Alexandria Ocasio-Cortez, calling her Alexandria Occasional-Cortex for her apparent ignorance of basic economics (despite her college degree in the subject).

The Trump nickname for Beto is a bit of a disappointment, as everyone and their mom assumed that The Donald was going to call him “Beta.” Unfortunately, that name was well-established before Trump got his chance, so he called Beto the following:

Amusingly, the most insulting nickname for Beto was coined by the public (or, in fact, his parents), as critics insisted on calling the very white, very European Beto by his birth name – Robert Francis O’Rourke – instead of his adopted Hispanic nickname designed to give him some sort of camaraderie with Latinos in Texas.

Trump’s biggest political rival, Nancy Pelosi has been the architect of seemingly every aspect of the opposition Trump has faced in the US House during his stint in the White House. She floated every conspiracy theory imaginable, initiated Trump’s impeachment proceedings, ripped up his State of the Union speech on national TV, golf clapped in his face, and is viewed as a heel by half the nation and a hero by the other half. As a result, there isn’t just one Trump nickname for Pelosi, there are several:

Bernie has been the source of much of Trump’s ire, as the POTUS is a capitalist and the Vermont Senator is an avowed socialist (but a millionaire nevertheless). Sanders is unpopular in the Democratic party, railroaded by the DNC during his Presidential bids in both 2016 and 2020. Trump’s nickname for Bernie basically riffs on his apparent fiscal ignorance:

Trump’s nickname for Jeff Sessions is allegedly Mr. Magoo, though Trump denies it. We don’t know why, however, as the name is apt. The guy looks exactly like Mr. Magoo, and he’s almost as bumbling and aloof.

Perhaps one of Trump’s best nicknames was the handle he came up with for Elizabeth Warren. After falsely claiming Native American heritage for her entire life (and using said minority status to secure various jobs and posts), Warren was called out by just about everyone. There is more than one Trump nickname for Elizabeth Warren, but this is the heap best of the heap big bunch:

The public riffed on Trump’s “Pocahontas” moniker, opting instead for the (perhaps even better) “Fauxcahontas.” Other Trump nicknames for Warren include Goofy, Uber Left Elizabeth, Fake Pocahontas, and The Indian.

The Governor of MI has received the most dismissive nickname from the Commander in Chief, and it’s thus one of the funniest:

Donald Trump didn’t save his nicknames just for political rivals. There are many media personalities and celebrities who have criticized Trump over the years, and he’s fired back every time. A few of our favorites include the following:

*CNN host Chris Cuomo, when called Fredo in public by a Trump supporter in New York, went on a seemingly drug- and steroid-induced rager caught on camera, later explaining that to Italians, “Fredo” is like the “N word.”

Fredo, of course, is the little brother in The Godfather, who lives bitterly in the shadow of his more powerful older brother. Chris’ brother, of course, is Andrew Cuomo, the Governor of New York. And while there is no notable Trump nickname for Cuomo the elder, “Andrew Coma” has been used on conservative message boards after the NY governor mandated that COVID-19 patients be placed into nursing homes, killing thousands of elderly New Yorkers in the process.

Foreign leaders also earn Trump’s fanciful monikers from time to time. While he seems less concerned with criticizing foreign governments and their representatives, he has used the opportunity – at times – to dub some politicians with a classic Trump nickname (in some cases, quite literally).

The most famous of these, of course, is Trump’s nickname for Kim Jong Un, though the most amusing is probably his dismissive nickname for the PM of Canada.

Naturally, no President takes or leaves office unscathed, and Presidential nicknames are a tradition not just in the US, but around the world. Trump’s nicknames run the gamut of good, bad, and ugly, and we cover a few of the most popular ones here.