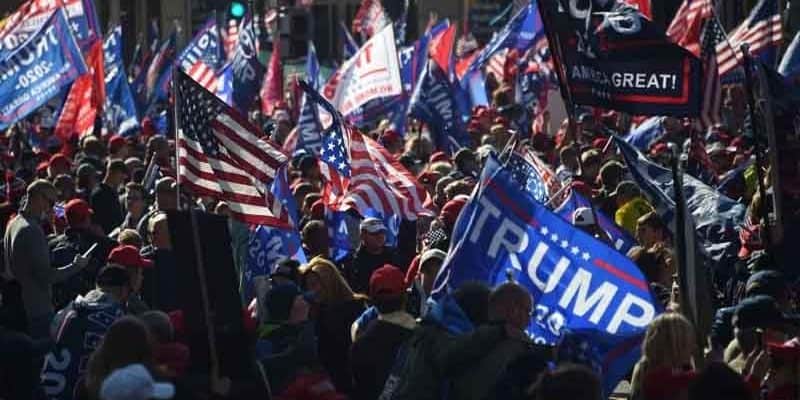 “He won because the election was Rigged.” President Trump tweeted on Sunday. Some White House officials say this slip-up is the beginnings of the President slowly and begrudgingly ceding to Joe Biden. In a press release from the Rose Garden just a few days ago, Donald Trump had a similar misspeak.

The President immediately backtracked from the tweet and doubled down on his resilience against a fraudulent system. “He only won in the eyes of the FAKE NEWS MEDIA,” Trump wrote. “I concede NOTHING!”

These statements came on the heels of a Million MAGA March on Freedom Square. Reportedly, around 10,000 Trump supporters of all backgrounds gathered under unifying battle cries of election fraud, the Democrats’ communist agenda, and stopping Antifa.

The march consisted of standard Trump supporters, along with Proud Boys members and QAnon conspiracists. The rally was met with counter-protests, which resulted in minor violent altercations between observers.

Meanwhile, the Trump administration’s string of court cases across multiple states are losing their steam. None of the issues have made much progress throughout the system due to a substantial lack of evidence.

The Trump administration dropped out of a critical lawsuit in the battleground state of Pennsylvania. The case accused election officials of unlawfully blocked election observers from tracking the count, attempting to invalidate nearly 600,000 votes.

Pennsylvania courts dismissed that suit. The Trump lawyer team rebounded with a new lawsuit that instead focuses on how some Democratic-leaning counties allowed voters to fix errors made on mail-in ballots.

In another Rustbelt court challenge, Trump’s team filed a suit against Michigan’s board of electors in the city of Detroit for voter election fraud. Lawyers and officials handily dismissed the allegations in a sentiment that is being shared across the country – there is no evidence of voter fraud.

In Arizona, lawsuits also failed to turn the tides on the blue wave. President Trump tacitly resigned himself from the race in Arizona, supporting the theory that President-elect Joe Biden will step into office full stride on January 20th.

However, in an interview on Sunday with Fox News, Trump’s attorney, Rudy Giuliani, expressed that he had caseloads of new evidence he cannot share yet. “We have proof that I can’t disclose yet,” he said, “This has to be examined … beyond this election, that I believe will be overturned.”

More and more people believe that Trump’s efforts buy time and line his pockets on the way out. Millions have contributed to Trump’s “Election Defense Fund.” The Fund is part of a Super PAC that has come into existence just recently.

When someone donates to the Trump campaigns recount fund, the money most likely does not fund recount legal expenses. Unless donating more than $8,333, 60% of an individual’s donation goes toward the new PAC – which is likely legally barred from spending on recounts. The other 40% goes to the RNC, who may spend the money on recounts at their discretion.

So, what will the money be spent on? The Federal Election Commission (FEC) stated, “In several advisory opinions the Commission has said that campaign funds may be used to pay for up to 100 percent of legal expenses related to campaign or officeholder activity, where such expenses would not have occurred had the individual not been a candidate or officeholder.”

Trump has been able to invoke Presidential immunity on multiple legal cases he has been involved in since taking office. Most notably are two New York City issues concerning possible crimes by the Trump organization and tax fraud.

Without Presidential immunity, the President will have to face those legal challenges and may be able to use donations from the Election Fraud Fund to do so. The money coming in may aid Trump in retaining political potency after Joe Biden takes office.

The President seeks to maintain the support from his voter base, which consists of demographics historically unrepresented in the Republican party. Trump can use his fund money to host rallies and events, speaking to that voter base, setting himself up to hold significant sway over the GOP through the power of his endorsement.