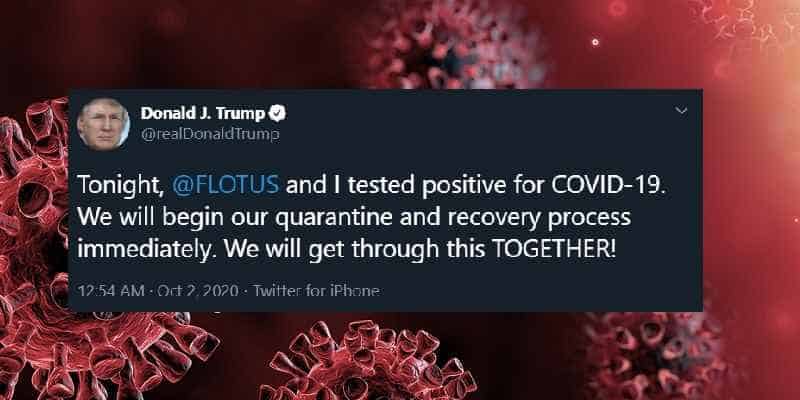 Just hours after finding out that his senior counselor, Hope Hicks, had come down with a case of the ‘Rona, the President sent a tweet revealing his COVID-19 diagnosis, as well as that of the FLOTUS.

Tonight, @FLOTUS and I tested positive for COVID-19. We will begin our quarantine and recovery process immediately. We will get through this TOGETHER!

Donald Trump’s reelection betting odds had been slipping since his questionable performance in the first Presidential debate. Now, following a tweet letting his followers know his intentions to begin the quarantine process, his odds have hit a new low, surpassing the chasm he dug for himself during the heat of the Black Lives Matter protests.

Joe Biden is now sitting in a very comfortable lead at betting sites offering odds on the 2020 Presidential election, larger than any candidate has held thus far during the general election cycle.

Many are suggesting that Trump’s COVID-19 declaration is merely a stunt to make up for his lackluster performance at the Presidential debates, and is hoping for some sort of sympathetic response from American voters.

So far, that has not been the case, as the responses from all sides have ranged from suspicion to outrage. Following months of minimizing the virus, the President comes down with it himself. His opponents are not content with claiming that it is a case of just desserts.

They are now flocking to international sportsbook sites and betting on Joe Biden en masse. So what does Biden’s increased odds actually mean when it comes to his chances of winning the Presidency on November 3?

Taking the average of the two betting lines above, we’ll apply odds of +185 toward Biden’s chances of becoming the next POTUS. Those odds translate to a 65% chance of winning. 2 outta 3 ain’t bad – unless your name is Donald Trump.

With President Trump’s current condition causing him to quarantine for two weeks – or perhaps more – will he be able to make it to the debate stage for the proposed second and third events that still remain on the schedule?

Joe Biden is still heavily favored to participate in both events according to the Presidential debate betting odds, with -2500 and -5000 odds placed on the second and third debates, respectively.

However, the way these lines are presented base all of the action on whether or not Joe Biden will participate. They make no indication of Trump’s intention to join the debates – which before yesterday’s tweet was a foregone conclusion.

Therefore, we can’t speculate on Trump’s future participation in the debates based on these betting odds.

We can, however, speculate on whether or not he makes another debate during this election year based on current events, and the outlook is not good.

However, if bettors paying attention to politics over the past few years in the United States know anything, it is to expect the unexpected, and we’d be surprised if there weren’t more fireworks and bombshells in store for the next four weeks.

We’re only a month out from selecting the next President of the United States. Will Trump retreat to his bunker and simply wait for his fate to be determined? Don’t bet on it.