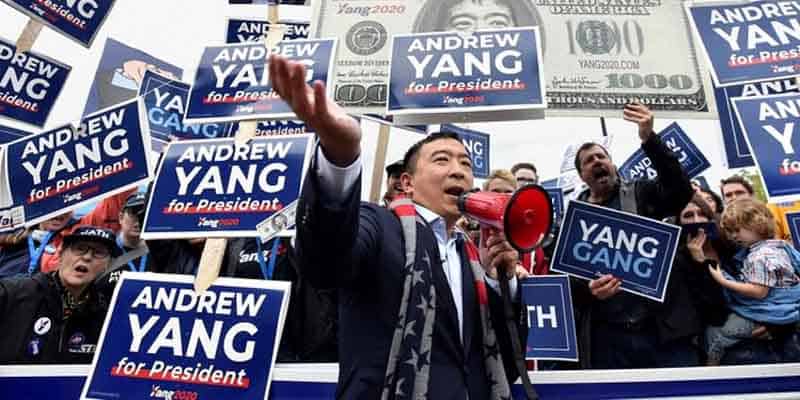 While the October debate is only days away, we’re already getting a good idea of who will be on the stage in November.

And Andrew Yang has qualified once again.

Yang became the eighth Democrat to qualify for the November debate, which will be the fifth sponsored by the Democratic National Committee. MSNBC and the Washington Post will co-host the event in Georgia on Nov. 20.

After the New York tech entrepreneur got the good news, Yang took to Twitter to thank the #YangGang.

And we have qualified for the November debate!! Thank you #YangGang for making this happen – the momentum is growing every day!!! 😀👍💪 https://t.co/wah6RYl6Fc

The bar was raised for the November debate after more candidates qualified for the stage in October than in September—which sparked criticisms since it’s supposed to be a process of elimination, not an addition.

The new threshold required candidates to have at least 3% in four state or national polls or 5% in two qualifying state polls as well as 165,000 individual donors, with 600 unique contributors in 20 states.

Here is the field of eight (so far) for next month’s debate stage:

Presidential debate prop bets have yet to be released for the October or November debate. We expect to see the political betting sites to start listing odds next week.

Yang got the thumbs up from 3% he received in the latest Quinnipiac National Poll that was conducted from October 4 – 7. Here are the results from their recent October poll:

*Everyone else polled at or below 2%

And there’s more good news from the one-time longshot candidates because the most recent 2020 odds for Yang saw him receive a slight bump from last week listings.

Previously, Yang was listed with +800 odds at BetOnline, which gives him an 11.11% chance of winning the 2020 Democratic Nomination.

But over the past week, his odds to become the Democrat Party’s nominee rose to +700 odds, and the new posting gives Yang an approximately 12.50% chance—placing him third and only behind Warren and Biden.

And with the fourth debate just around the corner—Tuesday, Oct. 15 in Ohio—and seeing how he’s qualified for the stage in November, there’s plenty of time for Yang to close the gap, especially considering his odds have never seen a significant decline to date.