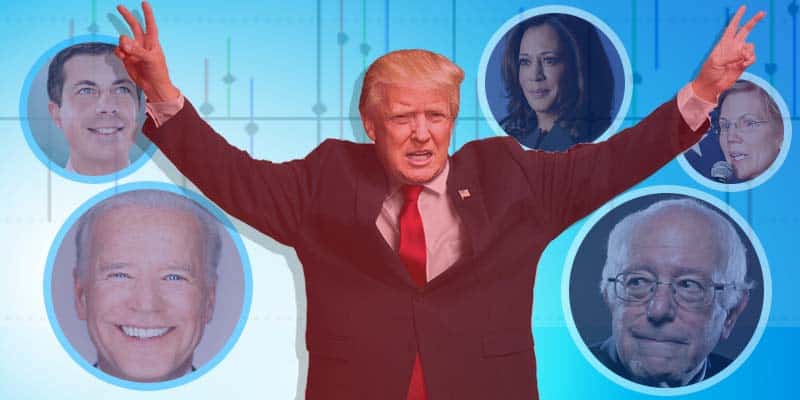 Of the 23 Democrats seeking the party’s nomination, only one will face incumbent Republican President Donald Trump on Tuesday, November 3 during the 2020 US presidential election.

So, this begs the question: Who has the best chance of beating Trump in 2020?

To answer this, we’ll examine how the betting odds for each of the Democratic candidates have changed since 2019 began and whether their chances have gone up▲ or down▼ over that time.

We have tracked the 2020 odds for all presidential candidates since the start of the year (indicated by “Then”), and the current odds (or “Now”) — taken on May 24 — can be found at Bovada Sportsbook.

How Public Money Influences The 2020 Odds

Before breaking down the chances for each candidate, let’s run down how money wagered by the public can affect the 2020 odds.

This is why the betting odds board at online sportsbooks can be one of the best prediction markets you’ll find anywhere. How the public views a candidate at any point in time or on a specific issue can be seen in real-time based solely on which candidate is receiving the most money after the odds have been posted.

Essentially, it’s like the old saying, “Put your money where your mouth is.”

Before we weigh each of the Democrats chances of beating Trump, we need to look at the odds for Trump himself and determine if his chances are rising or falling.

Top 5 Democrats With The Best Chance To Beat Trump

We’ll rank each Democrat based on their current odds, display whether their chances have been going up or down since January 1, 2019, and provide some insight into the top 5 most likely Trump challengers. Some candidates didn’t have odds to start the year — or currently don’t have odds at all — and we’ll indicate when that’s the case.

The Rest Of The Democratic Field

The following candidates have odds that fall just outside the top 5 most likely Democrats to beat Donald Trump. Andrew Yang narrowly missed the cut, but we think his odds will get a boost when he takes the debate stage. The same is likely true for Tulsi Gabbard and Amy Klobuchar. However, Beto, Booker, and Gillibrand are falling fast will need to come up with some way to stop the ship from sinking.

Declared 2020 Candidates With No Odds

The following 2020 Democratic candidates — and one Republican candidate — have not had any betting odds listed at any point during 2019. Oddsmakers likely believe their chances to be astronomically low, but we will continue to monitor the board throughout 2019 and into 2020.