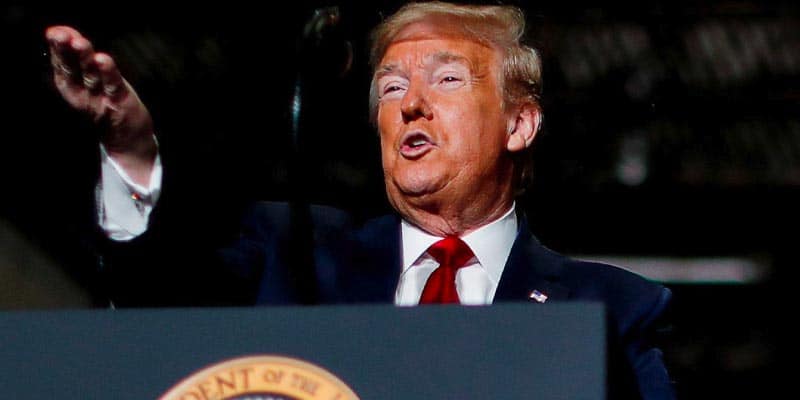 Betting odds for President Donald Trump’s reelection (-140) and first-term recession (-4000) have been shortened by leading online sportsbooks as the United States begins Phase One of the incumbent’s three-phase “Opening Up America Again” plan.

May 15 — Odds courtesy of BetOnline

President Trump is the consensus betting favorite to win the 2020 General Election on November 3, per the leading US political bookmakers.

When the Trump vs. Biden odds are converted to an implied probability and the sportsbooks’ juice is removed, we can that the oddsmakers give Trump a 56% chance to win while Biden receives a 43% chance to pull the upset. All other potential candidates are currently perceived to have a less than 1% probability.

Trump’s plan to reopen American businesses is already underway. Still, top health experts around the world, including Dr. Anthony Fauci of the White House coronavirus task force, have cautioned that more testing is needed and that opening too soon could cause the spread rate to increase after flattening the curve.

Following the health experts’ advice, getting a vaccine asap, covering workers’ pay, and not charging for medical costs are what should be the priority for the White House and Congress.

While the proposals from Biden and House Democrats certainly deserve scrutiny, it’s hard to fault them for at least trying while the President and Senate Republicans sit on their hands while the country inches closer to nearly 40 million Americans filing US unemployment benefits since mid-March.

Will There Be A Recession In Trump’s 1st Term?

May 15 — Odds courtesy of Bovada

*Graded winner: The US economy must experience two consecutive quarters with a negative annual growth rate in real GDP (rounded to first decimal).

The pandemic’s negative impact on the US economy, and the response from all politician, needs to be treated as if we are currently in a depression.

Note: The Trump political prop from Bovada uses economists’ traditional definition of “recession” as a transparent way of determining the winning and losing bets.

Near the end of April, Bovada drastically shifted the odds when the bleak first-quarter US gross domestic product numbers were released.

The sportsbook had previously listed “Trump’s economy” with Yes -875 and No +490 on whether a recession would happen, but the prop odds have now been shorted to Yes -4000 and No +1000.

To put it bluntly: Oddsmakers predict negative second-quarter GDP growth an approximately 95% implied probability while “it’ll all just disappear” gets a modest 5% chance.

Goldman Sachs told CBS on Thursday that they project the unemployment rate to hit 25% in 2020 — mirroring the jobless numbers from the peak of the Great Depression.

Since first announcing his candidacy in 2015, Trump has portrayed himself as a successful businessman who knows how to negotiate, make, and win deals.

Enough American voters bought into the idea in 2016, so it’s understandable why Trump has been the 2020 election favorite to this point, primarily due to the incumbency advantage.

However, these job numbers are so horrific that it’s hard to call this anything other than the biggest and most sudden economic collapse in the nation’s history.

Whether it’s fair or not, and regardless of whether Trump likes it or not, voters will cast ballots on November 3 as if the “buck stops with the President.”

The “greatest economy the world has ever seen” is no longer relevant when “job gains of the past decade have been erased.”

It’s too soon to tell whether Trump’s plan to reopen the country will be a success, but bettors bumping up his chances indicates the public at least “wants to believe.”

For now, the Trump vs. Biden matchup should be treated as a coin flip until the lives and jobs of millions of Americans can be accessed in the days, weeks, and months to come.