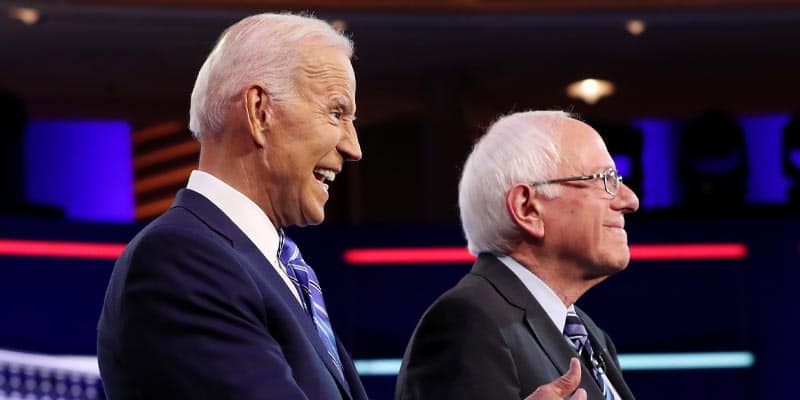 With 27 days remaining until the first votes are cast in Iowa to begin the Democratic presidential primary, the odds indicate that we may be in for a two-person race for the nomination.

The latest 2020 Democratic nominee betting odds show former Vice President Joe Biden and Vermont Sen. Bernie Sanders as the clear favorites to receive the most delegates for the party’s nomination.

Biden has a slight edge over Sanders, but there’s now a wide gap between the two frontrunners and the rest of the Democratic field. Additionally, both candidates’ percentage chance of winning is the highest we’ve recorded since the started of 2019.

At +175 ($100 bet wins $175), Biden’s nominee odds show him as the favorite. When converted to an implied probability, we see that the oddsmakers give the former Obama VP an approximately 36.36% chance of winning the nomination.

After the two favorites, the margin is the widest we’ve seen at the top during this primary cycle. Massachusetts Sen. Elizabeth Warren and former South Bend Mayor Pete Buttigieg are tied in third place at +800 ($100 bet wins $800), which gives them each an 11.11% chance of winning the Democratic nomination.

According to the latest aggregate polling data at RealClearPolitics, it appears the public political betting market is closely mirroring where both candidates place in recent polls.

In terms of polling, Biden and Sanders have advantages and disadvantages when looking at the map, but there are some key factors to take into account.

Biden leads nationally at 29.7%, which is 9.5 points ahead of Sanders’ 20.2%. He also leads Nevada—the third primary state to vote—at 29.0%, 9 points above Warren, and continues to dominate South Carolina—the fourth to vote—with 35% support, 18.7 points over Warren. Sanders polls slightly behind Warren in both of those states.

However, the entire primary isn’t held on a single day. National polling will change based on how each state votes, and the first two states are where Sanders could gain enough momentum to pull the upset.

Sanders currently tops the Iowa Caucus polling at 22.0%, followed closely by Buttigieg at 21.7% and Biden at 20.3%. For the New Hampshire election held a week later, Sanders has 22.7% support compared to 18.7% for Biden.

Poll respondents frequently list “electability,” i.e., the ability to beat Donald Trump—the favorite based on the current 2020 presidential election odds—as what they want most from the Democratic nominee.

Biden is consistently listed as the “most electable” by likely Democrat primary voters. But if Sanders beats Biden in the first two states, expect to see a significant portion of the electorate change their mind about Biden’s electability.

After all, if Biden can’t even beat Sanders in small states like Iowa and New Hampshire, then how is he supposed to defeat Trump when the entire country votes in the general election?

Lastly, consider this: Since 1972—when both parties implemented the Iowa/New Hampshire primary start—Bill Clinton, in 1992, is the only Democrat or Republican to win his or her party’s nomination after losing both states.

Every other eventual nominee won at least one of the first two states. A bet on Biden to win the Democratic nomination, when he’s projected to lose Iowa and Hampshire, is a bet against nearly fifty years of historical precedence.

It’s not impossible—it’s a bold strategy, Biden bettor. Let’s see if it pays off for you.