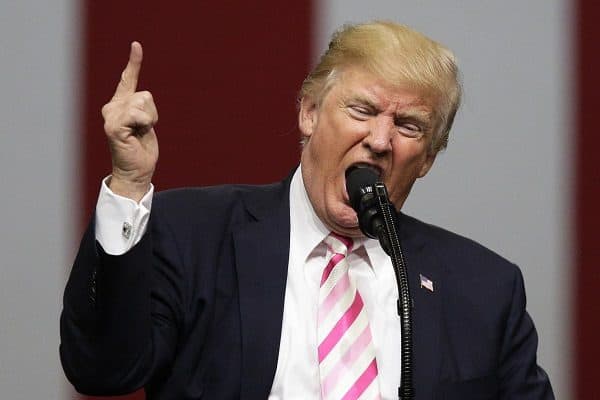 The NFL made headlines when they announced that players will now be fined for kneeling during the National Anthem. The 2-year long protests seem to have taken their toll on some NFL sponsors and pushed conservative fans away from the league. President Trump has long been against the protests and criticized players since last year. He was one of the first to congratulate the NFL on their ruling—he even claims to have introduced the idea—but now there are rumors he may have been the one behind it.

There are multiple glaring issues with President Trump exerting influence on the NFL’s policies. For one, it is illegal for a government official to dictate what a private corporation does with its employees. There is a checks and balances system in place to avoid giving elected officials too much power. President Trump has been known to use bullish tactics, especially when campaigning, but bullying a private corporation on an issue like this? While this may seem in his behavioral repertoire, it is certainly not presidential by any means.

It is no secret that the NFL viewership ratings have declined over the past couple seasons. Some believe it is because of the lack of competition. Others believe that it has to do with fans getting tired of these political protests during games. President Trump was sick of the protests and has made statements on how players that kneel perhaps shouldn’t be in this country.

This deportment-crazed individual is threatening US citizens because they are kneeling during the National Anthem to draw attention to racial injustice. The NFL’s move seems more like a play to appease the disgruntled fans and sponsors that do not agree with the protests. If Trump is pulling the strings, it means the NFL is susceptible to his wishes and that this policy change is really a ploy to make American football fans happy.

Say what you want about Trump supporters, but they will vouch for their president until the day they die. If President Trump says the NFL is unacceptable due to these protests, it is not farfetched to expect some type of boycott from his supporters. Commissioner Roger Goodell has his stakeholders’ interests in mind with a move like this, not the proposed ‘respect of the flag.’ By gaining Trump’s support, the NFL hopes to gain back some of the fans they lost.

What will be interesting to see is if the NFL decides to change part of the policy. The league stated that players are allowed to remain in the locker room for the National Anthem should they choose to do so. President Trump denounced this exclusion in an interview with Fox and Friends. If the NFL decides to go back on this part of the policy, Trump’s influence will be clear as day.

With all the issues President Trump is dealing with, it seems odd he would fixate on the NFL protests. Then again, this seems like exactly the diversion tactic he would use to throw attention off the Stormy Daniels scandal, his alleged Russian collusion and other issues at the forefront.