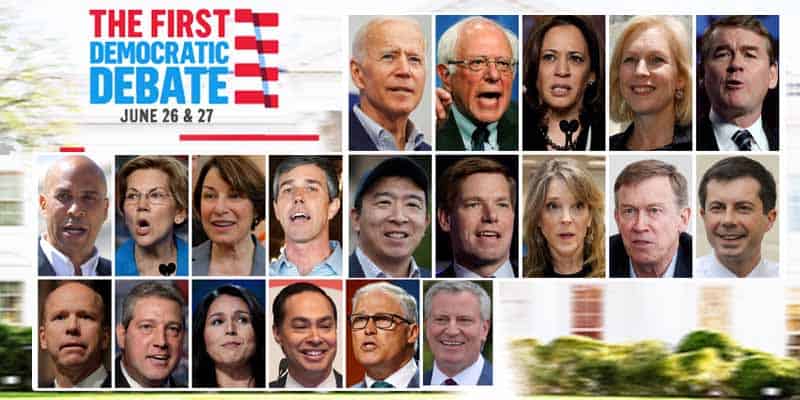 The first Democratic primary debate is almost here, so it’s finally time to start trimming down the field of 2020 candidates running for president to see who are the contenders and pretenders.

The Democratic National Committee announced the 20 Democratic candidates that qualified, and NBC released the lineups for each night of the debate on Friday following a random group draw.

And will next week’s debates have an effect on the 2020 Presidential Election odds? You bet it will, and look no further than President Donald Trump, who shot up in polling after he dismantled his Republican opponents during the GOP primary debates in 2015 and 2016.

From the schedule, the announced lineups for both nights, and the current betting odds for the Democratic nomination — here’s everything you need to know before the next week’s fireworks officially kick off debate season.

When & Where Is The First 2020 Democratic Primary Debate?

The first Democratic primary debate will be held over two nights on Wednesday, June 26 and Thursday, June 27 at the Adrienne Arsht Center for the Performing Arts in Miami, Florida.

The debate will be held from 9 p.m. ET to 11 p.m. ET on both nights, and there are several ways to watch the live broadcast.

Who Qualified For The Debate?

To qualify for the stage, 20 Democratic candidates need to either 1) reached 65,000 individual donors and a minimum of 200 donors per state from 20 states, or 2) polled at 1% or higher in any three surveys approved by the DNC.

The 20 qualifying candidates are:

Who Didn’t Qualify For The Debate?

The following Democratic candidates were unable to meet either requirement set by the DNC for the first debate.

What Are The Lineups For Both Nights?

The following are the results from the random draw and will be the lineups taking the stage on the first and second night. Podium order has yet to be determined.

Who Will Win The 2020 Democratic Nomination?

Currently, Biden is the frontrunner in both the polls and the betting odds to win the 2020 Democratic nomination. With such a big lead and target on his back, expect the other 19 candidates to come after the leader of the pack on both nights.

Sanders, Buttigieg, Yang, Warren, and Harris are all in contention to become the party’s nominee, according to the oddsmakers.

However, the remaining Democrats will need their message to resonate next week if they want to become part of “the daily conversation” and increase their poll numbers as a result.

Here are the current betting odds to win the 2020 Democratic nomination from BetOnline.

When & Where Is The Second 2020 Democratic Primary Debate?

The second 2020 Democratic primary debate will be held in Detroit, Michigan on Tuesday, July 30 and Wednesday, July 31. CNN will host the second debate and will use the same criteria for its two-night format.