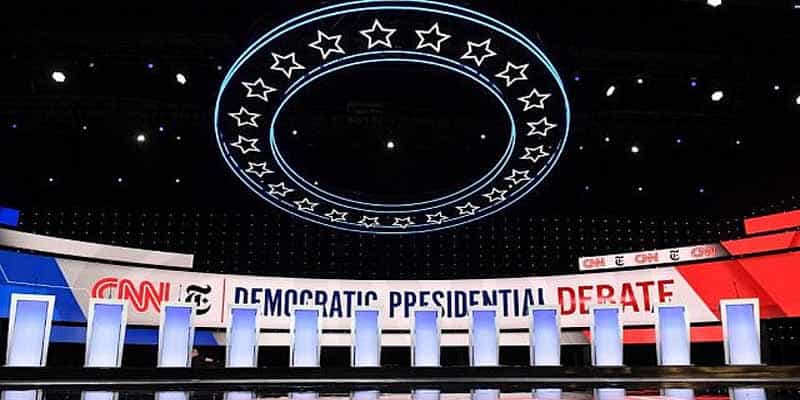 The first Democratic debate in June was held in Florida, one of the country’s most important swing states. Tonight, for the fourth debate, the presidential hopefuls travel to another swing state: Ohio.

Hosted by CNN and the New York Times, tonight’s debate will be at Otterbein University in Westerville, Ohio. Anderson Cooper, Erin Bernett, and Marc Lacey will moderate the event. Airing at 8 pm ET, the debate will be available on CNN, CNN International, and CNN en Español.

Like they have for the three previous debates, BetOnline is accepting actions on a variety of political proposition bets. Tonight’s bets range from Hunter Biden, to the NBA, to Facebook, and back to polling percentages.

For ease of use, the bets are separated into categories on this page.

Popularity bets: What topics and candidates will be en vogue?

The following list of prop bets focuses on debate topics, the amount of talk-time for particular candidates, and who is most likely to be mentioned on Twitter.

Joe Biden and Elizabeth Warren are expected to rule the speaking times and get the most mentions on Twitter tonight, but the popularity of other frontrunners could disrupt that.

Which topic will receive the most debate time?

Who will receive the most speaking time during the debate?

Who will be tweeted about the most during the debate?

Speech-related props: Who will say what?

The majority of the prop bets for the fourth debate are centered on what the candidates might say during the debate.

Over/unders are set for phrases like “China,” “Hunter Biden,” and “The Rock” while BetOnline is also accepting action on the likelihood of curse words and protesters’ interruptions.

How many times will “impeach” be said?

How many times will “Ukraine” be said?

How many times will “China” be said?

How many times will “billionaire” be said?

Will “fake news” be said by any candidate?

Will “Hunter Biden” be said by any candidate?

Will “NBA” be said by any candidate?

Will Warren say “The Rock”?

How many times will Biden say “Obama”?

How many times will Yang say “thousand dollars”?

Will Yang announce another giveaway?

Will Sanders withdraw his candidacy on stage?

Will any candidate endorse another for President?

The last category of bets is dedicated to the candidates’ polling percentages after the debate.

Using The Hill-HarrisX poll as a reference point, the over/unders are for their projected polling number on Friday, October 18. The current percentages are:

Of all the set totals, Harris, Sanders, and O’Rourke have over/unders listed lower than their current polling percentages.