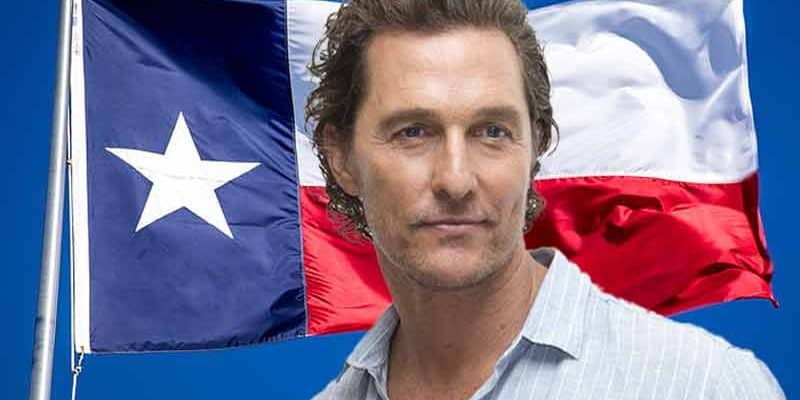 Matthew McConaughey Odds For Texas Governor Debut, But Will He Run?

There have been rumors swirling that actor Matthew McConaughey is considering running for Texas Governor in 2022, although he has yet to officially declare his candidacy for that position.

That lack of a concrete decision by McConaughey hasn’t soured online political sportsbook sites from posting odds on his chances, and the current lines feature him as the third most likely candidate to win the election next year.

Although Matthew has never been short with words when approached or asked, his political leanings remain vague. He is incredibly popular in the state of Texas and often heaps superlatives upon the region any chance he gets.

Because most members of the Hollywood elite are also registered Democrats, many assume that McConaughey would run as a member of the DNC.

Not so fast. Matthew McConaughey has received a Texas Gubernatorial endorsement from GOP US Senator Ted Cruz who claimed that Matthew would be a ‘formidable’ candidate to become the Governor of Texas in 2022.

Despite Cruz’s seemingly positive comments in regard to a McConaughey candidacy, they were based in fear that he would provide a stiff challenge for incumbent TX Gov. Abbott.

Who would know better the makeup of the constituents of the Lone Star State than Ted Cruz, a US Senator who handily defeated Beto O’Rourke in 2020 despite his seemingly overwhelming popularity?

According to Forbes, GOP political analyst, Karl Rove, has doubts as to which party ticket McConoughey would run under, but also acknowledges that he has the potential to sway the election process drastically.

McConoughey is a resident of Austin, Texas, and recently raised millions of dollars to assist those in the state that were impacted by the massive power outage that followed a severe winter storm earlier this year.

Gubernatorial election odds are often most profitable early on in the process, so incredible profits of up to 5x can be made by betting on Matthew McConoughey right now. If and when he declares his candidacy for Texas Governor, his potential will be viewed with more legitimacy by oddsmakers and the lines will narrow.

Many political pundits do not believe that McConoughey would be a valid contender if he ran, but one only needs to look back to the Presidential Election of 2016, and Donald J. Trump’s emergence as evidence to why no candidate should be overlooked or not taken seriously.

All it took was one comment regarding immigration at the Mexican-American border to place Trump atop the polls, so just imagine the potential of McConoughey’s swagger on the debate stage against a stammering O’Rourke or Abbott.