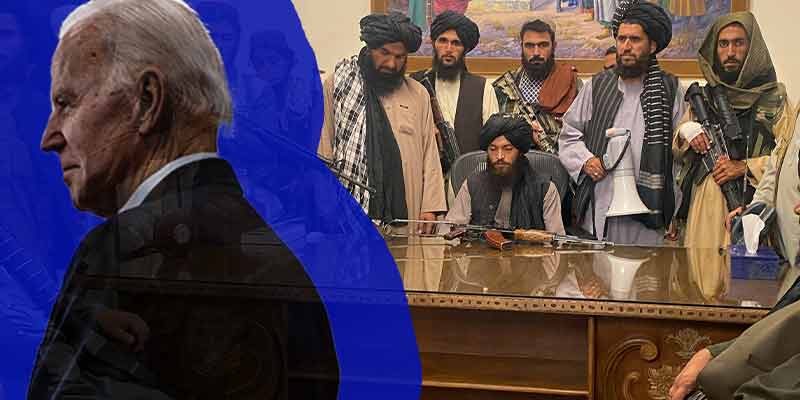 Similar to the realm of sports, a loss in politics ultimately falls upon the person that was calling the plays. President Joe Biden was not serving in the White House when the Afghanistan conflict began in 2001, and he was months away from being sworn in when Donald Trump called for the withdrawal of all US troops in the region.

While a hard date of August 31st has been laid out for all United States armed forces to depart the area, the Taliban has taken advantage of the situation by sacking Kabul and reattaining the control they lost nearly 20 years ago.

Skeptics of Joe Biden have been forecasting an early departure from office since he was elected in November of 2020, and now the Presidential odds for removal from office are narrowing at online sports betting sites that take in action on election outcomes.

It makes sense. Biden has been in power since January and has been the lead man for the evacuation process for nearly eight months. It doesn’t matter who put the pieces into play. What does matter is Biden’s governance of the process, and pundits across the board are grading his performance with an F.

The US Government is now providing safe haven in neighboring countries to take in and screen refugees that are fleeing Afghanistan and its new Taliban rule.

There are expected to be thousands of former allies of the United States that will be on the run because they are in fear of persecution from the Taliban and their unfavorable stance toward western interests.

While it is unclear what Biden’s next move, if any, will be toward the new rulers of Afghanistan, for now, he appears willing to talk and is also acknowledging the power change.

“[T]he Taliban has to make a fundamental decision. Is the Taliban going to attempt to be able to unite and provide for the well-being of the people of Afghanistan, which no group has ever done[?]”

The Taliban has issued statements indicating that they are attempting to govern peacefully, but the situation does not seem to be deescalating according to reports from those still inside the country.

Prior to the takeover of Kabul by the Taliban, President Biden’s impeachment betting sites featured his odds at a -2000 moneyline, but now those have narrowed to -1500.

A 500 point shift in the money line odds on political prop bets may seem significant, but dropping from -2000 to -1500 only changes Biden’s probability of avoiding impeachment from a likelihood of 95% to 93%.

The odds for Biden to complete his first term as POTUS are marginally low at -180 for the outcome of “yes,” but because of the other political betting lines on the board, we can assume that it will not be due to impeachment charges.

If online election gamblers are intent on betting on Joe Biden and the odds placed on the date he will leave office, the following line should provide solace.

If the above odds are an accurate calculation of what’s to come, President Joe Biden’s final day in office will come at the conclusion of his first term, or during or at the end of his second.

The only way to make any serious profit on Biden’s impeachment odds is to get in on them now because when his fate becomes more certain, the moneylines will gravitate closer to plus or minus 100.

Don’t look now, but midterm election odds for the US House are favoring a GOP upheaval, so Biden’s fortunes could change drastically if those predictions are correct.