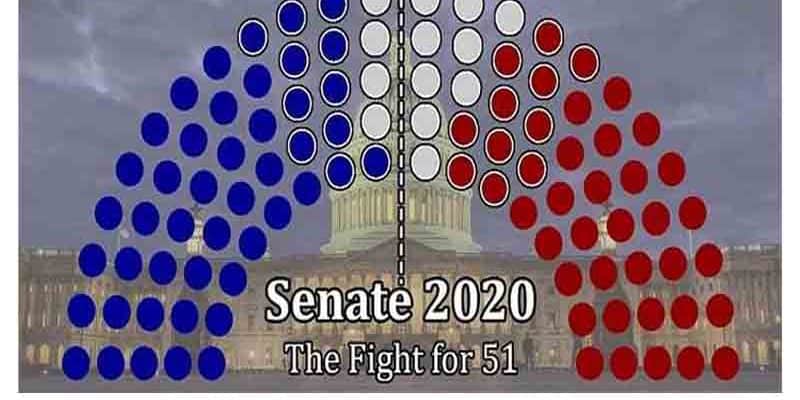 The election ticks closer and closer, and now more than ever, the country faces the possibility of a structural shift in power.

Joe Biden is not only poised to win the election by popular vote and electoral college votes, but the Democrats also lead in US House and US Senate polls.

Many sportsbooks have posted lines on the odds of a full Democratic sweep. The US Senate currently comprises 53 Republicans, and 45 Democrats, and two independents that caucus with the Democrats.

The Democratic Party needs to win four seats for a 51-senator majority. Moreover, if Biden wins, Kamala will serve as Senate President and decide tie-breaker votes.

Many on the right, including President Trump, fear the “blue wave” will engulf, and subsequently drown, the United States.

However, the tense US Senate races, especially swing state odds, create ample opportunities for political betting. Below, we look at some contentious senate races and consider their political and social implications.

Doug Jones (D) rose to popularity after prosecuting four white supremacists after bombing a church and killing four girls in Birmingham, AL, in 1963. He defeated Roy Moore in 2017 in a 2017 special election to replace Jeff Sessions.

Tuberville (R) is a political newcomer and former football coach for Auburn University and the University of Cincinnati. With a Trump endorsement, he leads by a substantial margin.

This race-winner decides who completes the final two years of the late Sen. John McCain’s 6-year term. Mark Kelly (D) holds the lead in the polls, mostly with voters less than 50 years old.

The stakes are high in Iowa, as it is the second most expensive Senate race in US history.

While Greenfield (D) is +100 in the odds, she leads slightly in the polls. Ernst (R) won her seat in 2014 and was considered a political hot-shot and possible vice-presidential pick for the Republicans.

Consider taking the +100 on Greenfield for payouts that will equal the amount risked.

Kansas has not unseated a Republican since 1932, and this probably won’t change in 2020 as Roger Marshall (R) holds a slight lead against Barbara Bollier (D), who switched parties citing the states growing “right-wing extremism.”

Mitch McConnell (R) holds a strong lead against Amy McGrath (D). Kentucky, historically Republican, also aligns closely with the Trump Administration. Given McConnell’s legacy in Washington, he is poised as a firm favorite.

John James, a young military veteran and prolific businessman, is running a tight race. He backs Trump and simultaneously campaigns on a non-partisan platform.

*Action is currently locked, typically due to the sportsbook getting a flood of action on one candidate and waiting for the money to balance out on both sides before reactivating the betting line.

We could not forget old Lindsey Graham and his declining reelection odds. In a state that the GOP felt they had stable control over, Jamie Harrison (D) has raised outstanding amounts for his campaign and turns a historically Republican state into a contested one in 2020.

The GOP could be in peril come Nov. 3. These final weeks are crucial for the DNC if they intend to gain control of both branches of government.