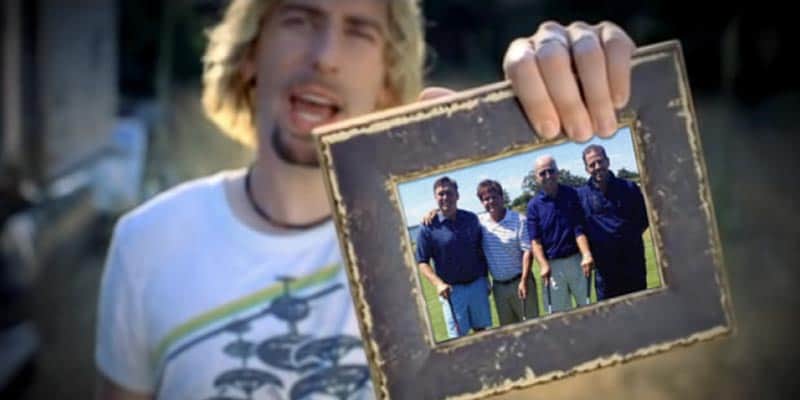 In terms of meme usage, using Nickelback is the equivalent of a Trump card.

Ironically, that’s just what President Trump did last night on Twitter before it was taken down due to a copyright claim.

The tweet itself is still visible on Trump’s Twitter, but the video is not available. The President uses lyrics from the song and its video to target Joe and Hunter Biden’s alleged dealing with Ukrainian gas company executives.

“LOOK AT THIS PHOTOGRAPH,” Trump tweeted, quoting from the 2005 #1 hit “Photograph” by Nickelback.

LOOK AT THIS PHOTOGRAPH! pic.twitter.com/QQYTqG4KTt

Luckily, with the popularity of the band, the meme, and the President’s Twitter, the video has been shared and reuploaded on a variety of social media platforms. For now, the video is uploaded to YouTube and can be viewed below.

Referencing “Do Nothing Democrats” that are pursuing the impeachment inquiry into him, Trump voiced his frustrations with the “bullsh-t.”

The Do Nothing Democrats should be focused on building up our Country, not wasting everyone’s time and energy on BULLSHIT, which is what they have been doing ever since I got overwhelmingly elected in 2016, 223-306. Get a better candidate this time, you’ll need it!

As this was before any music-based memes were used by Trump or Democrats, one cannot fault the President’s opponents for not using the infamous “You played yourself” meme featuring DJ Khaled to disprove Trump’s claims.

First, Trump did not win 223-306 as he claimed, but actually 227-304. His use of “overwhelmingly” winning is also misleading since he lost the popular vote by 3 million ballots.

Regardless of his tweets or the chance that he may be impeached, oddsmakers are still giving the incumbent favorable chances of earning four more years.

President Trump has the best odds of winning the 2020 Presidential Election at +120.

A full list of presidential candidates and their odds are below for reference. Maybe if Biden decides to use a music meme, he could boost his odds. The Post Malone-concert-flasher is still up for grabs.

Odds to win the 2020 Presidential Election