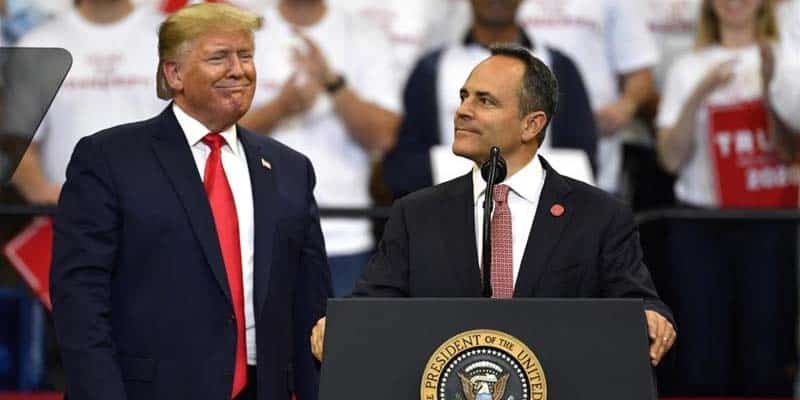 It may be a somewhat negligible one percentage point decline.

But when accessing the results of Election Day 2019 and how it’s impacted next year’s general election odds, a single percentage point drop—when added to his glacially slow fall since the start of the Summer—could indicate that things may not get better for President Donald Trump any time soon.

Prior to Tuesday’s off-year election results, the 2020 odds for Trump were listed at +120. When converted to an implied probability, we can see that the oddsmakers gave him an approximately 45.45% chance of winning back the White House.

However, Trump’s reelection odds have dipped slightly immediately following the Democrats’ strong showing on Election Day, falling to +125 odds—a 44.44% chance to be elected to a second term as President of the United States.

Trump placed some big bets on key gubernatorial and state legislature races, and while one on Mississippi did return an investment, his two biggest wagers—Kentucky and Virginia—did not payout.

In Mississippi, the Trump’s Stump strategy works as Republican Tate Reeves defeated Democrat Jim Hood for the open governor’s seat. Hood had been ahead in the polls throughout much of 2019, but his lead shrunk once Trump publicly backed Reeves.

But that was about all that went well for Trump and the GOP on Tuesday night. Republicans suffered major defeats in the Virginia House and Senate races, which turned blue for the first time in a quarter-century.

But perhaps nothing was as big of a blow to Trump then what went down in the Bluegrass State, where the President had just held a big rally the night before the election to endorse Republican incumbent Gov. Matt Bevin.

“If you lose, they’re going to say Trump suffered the greatest defeat in the history of the world,” Trump said at the rally. “You can’t let that happen to me!”

While that’s quite an exaggeration—the “greatest defeat in the history of the world” would be if Trump, the current favorite, loses in 2020—it was nevertheless a loss.

Despite being down 5 points in a recent gubernatorial poll, Democrat Andy Beshear defeated Bevin by 5,198 votes (0.36%) to become the next governor of Kentucky, which is traditionally seen as a red state.

However, Bevin has not conceded at the time of writing despite the Kentucky Secretary of State office calling the race for Beshear.

“This is a close, close race,” Bevin told supporters on Tuesday.”We are not conceding this race by any stretch.”

To add fuel to what could become a dumpster fire, Kentucky Senate President Robert Stivers said the legislature might eventually be needed to decide a winner under a state constitutional provision that hasn’t been used since 1899.

An automatic recount does not exist under Kentucky law. Bevin has called for a recanvass of the vote, which is a review of the vote totals in each county and is step one of the process to contest the results.

Next, the Franklin Circuit Court would take possession of all the ballots and voting machines and oversee a physical examination to conduct their own recount. The judge would then make a final decision.

Except the judge’s decision could technically not be “final” since Bevin could challenge the ruling if he has grounds or evidence of any election wrongdoing. Bevin said his campaign had spotted “irregularities,” which have been “corroborated” but didn’t offer any specifics Tuesday night.

Once a special session of the General Assembly has been called, the 11-member committee would examine the evidence and make a final decision—no further legal challenges from either side could be filed after the committee makes its determination.

While Trump’s efforts in Kentucky might turn out to not be in vain after all, he’ll get to place another wager next week regardless.

A Trump Rally in Louisiana is scheduled for Monday, and the President will endorse Eddie Rispone for governor ahead of the state’s Nov. 12 election. Democrat incumbent John Bel Edwards currently holds a 3-point lead in the latest state polls.