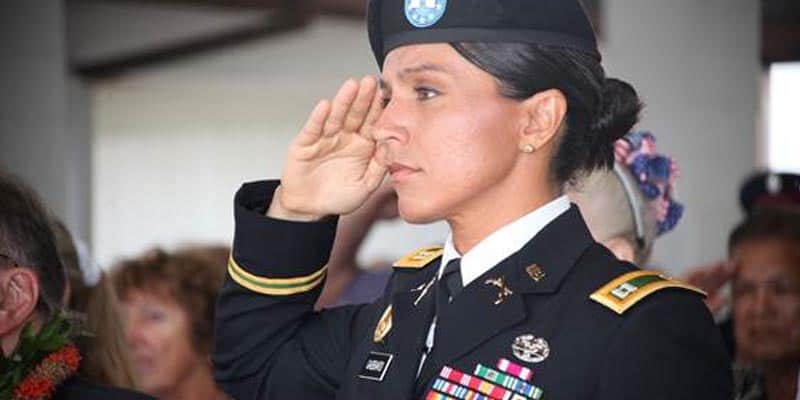 Will Tulsi Gabbard reporting for active duty with National Guard impact her 2020 odds?

A two-week paid vacation is what most American workers look forward to every year. But for one Democratic candidate, it’s a different type of work leave.

Rep. Tulsi Gabbard’s duty to America runs strong. The U.S. Representative for Hawaii’s 2nd congressional district is currently running for president, but she will be taking a two week break from that to report to active duty with the Army National Guard.

Gabbard, who has +2500 odds of becoming the Democratic nominee via Bovada, joined the medical unit of the National Guard in 2003 before deployment to Iraq in 2004-05 and Kuwait from 2008-09.

She has since earned the rank of Major and is only one of four Democratic candidates with military experience, along with South Bend, Indiana Mayor Pete Buttigieg (+800), Massachusetts Rep. Seth Moulton (n/a), and former Pennsylvania Rep. Joe Sestak (n/a).

The Congresswoman has used her experience in the military to her political advantage the last few months during the election, even becoming the most searched candidate on Google after the July debates.

Unfortunately for Gabbard, this has not yet given her the qualifications needed to secure a spot in the third Democratic debate in September. While she has already reached the threshold of 130,000 unique donors, having over 159,000 as of Monday, Gabbard has not reached the polling requirement.

If Gabbard cannot reach 2% support in four qualifying national or early-state polls before the August 28 deadline, she will be excluded from the Houston debate. If she is able to amass the numbers, the first Samoan to run for president will become the tenth candidate to qualify for the third debate.

Nevertheless, Gabbard said she is ready for training.

“I look forward to joining my fellow soldiers for a joint-training exercise with the Indonesian military, focused on counterterrorism and disaster response,” Gabbard said during a news release.

Starting Wednesday, Gabbard will be part of a American-Indonesian exercise in Indonesia despite facing a critical moment in her campaign. The Hawaii representative isn’t letting that get in her way, though.

“While some people are telling me, ‘Gosh, this is a terrible time to leave the campaign. Can’t you find a way out of it?’ That’s not what this is about,” she said Monday. “I love our country. I am grateful to be able to serve our country and the American people in many ways, including as a soldier.”

Although she does not plan on campaigning while in Indonesia, Gabbard says she will “be paying attention obviously to what’s going on and watching the news and keeping up on things.”

For a full comparison of Gabbard’s odds, along with the other top performing Democrats, a list is below.