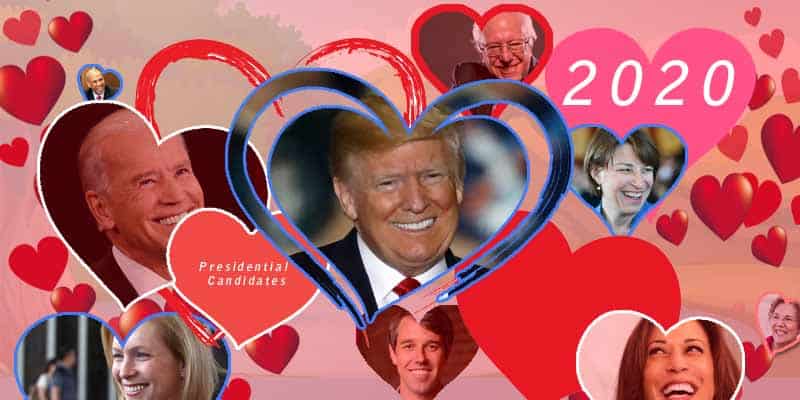 Valentine’s Day Odds Update: Which 2020 Presidential Candidates are Feeling the Most Love?

The race for the White House is officially on and although things are starting to get heated between President Donald Trump and the growing field of Democratic candidates, it’s time to take a step back, breathe, and embrace the love.

After all, it is Valentine’s Day and with a bunch of candidates still undecided, there’s no way to tell who will end up facing off against President Trump during the 2020 presidential election.

November 3, 2020 is still a long way out, but as of February 14, 2019, the list of Democratic presidential candidates gets longer by the day and picking out who will announce tomorrow is like picking from “a box of chocolates. You never know what you’re gonna get.”

Even Forrest Gump’s mother couldn’t have foreseen that anyone could announce at any moment, and big names such as Joe Biden, Bernie Sanders, and Beto O’Rourke are still expected to join the race but have not officially announced yet.

Before the free-for-all begins and dozens of other candidates come out of nowhere to seek the Democratic nomination, let’s see which legitimate Presidential candidates — both potential and those who have officially begun campaigning — will be receiving more roses based on the polls and public money bet by the American people up to this point in time.

To see which Democratic candidates are getting the most love, our resident cupid will take the recently released Feb. 12 favorability poll by the Morning Consult and combine it with current betting odds to win the 2020 presidential election from BetOnline to determine a “Love Meter Average.”

Keep in mind that huge disparities (such as 52% favorable, 11% unfavorable) are represented by registered voters who either reported: “No Opinion” or “Never Heard Of” when surveyed.

For President Trump, we’ll be using the betting odds along with his current average favorability rating from RealClearPolitics to determine how much love he’ll be receiving today.

Keep in mind, this isn’t scientific and is merely an average of public perception and who the public is betting on currently to win the presidency in 2020. So without further ado, let’s see who the PEO cupid has hit with his love arrow today.

PEO Cupid Analysis: Biden officially gets the most love today! The former Vice President under Barack Obama comes in first place for favorability with voters and fourth place with the oddsmakers, which gives him the slightest edge over the entire competition on our Love Meter. Now we just wait and see if he’ll decide whether or not to enter the race. But considering he’s getting the most love at the moment, it’ll be hard to imagine Biden won’t factor our findings here into his decision.

PEO Cupid Analysis: Coming in at número dos is the current POTUS himself, none other than Donald Trump. He is a massive favorite for 2020 at the sportsbooks, but this is because the field is so wide open for the Democrats while the Republicans have their candidate in Trump. He may be getting the most hate, but this is common for presidents. He’s still loved by his base and the oddsmakers, so that’s good enough Donald Trump’s re-election odds and for the second-highest average on the Love Meter.

PEO Cupid Analysis: The Democratic candidate that almost stole the show from Hillary Clinton in 2016 comes in at number three, getting the second most love from the public and the fifth most love at the sportsbooks. Sen. Sanders has yet to announce that he’ll be running but you can bet that when he does, there will be a Bernie-ng desire to get him to the White House.

PEO Cupid Analysis: The U.S. Senator from California has become the most likely candidate to challenge President Trump in 2020 in the eyes of the sportsbooks. The public that does know Sen. Harris does indeed love her (52% to 10%), so getting public attention will need to be a priority for Sen. Harris, who officially entered the race on Jan. 21. Of the Democratic candidates who have officially announced their campaign, she’s currently the safest bet to face off against President Trump in 2020.

PEO Cupid Analysis: Sen. Warren’s odds at the sportsbook took a hit after the whole “claiming to be an American Indian” document got brought to light. Before then, she was sitting at +1800 but still has a high favorability rating (52%), so she gets the fifth most love today. It’ll be interesting to see if the 18% unfavorability rating comes back to haunt her, but nevertheless, she officially announced her campaign on Feb. 9.

PEO Cupid Analysis: The Heartland Heartthrob burst out onto the scene last year the former Texas U.S. Representative nearly defeated incumbent Sen. Ted Cruz in a state that has traditionally voted Republican. Beto has the third high odds but half of the country still doesn’t know who he is, but you can likely Beto-n that changing should he decide to enter the race — a decision he said will come at the end of the month.

PEO Cupid Analysis: Sen. Booker announced he was running for president on Feb. 1, and checks in at number seven on the Love Meter. The biggest challenge for Sen. Booker will be bringing different ideas to the table and sticking out among the crowded field of Democrats if he wants to get some more love. Plus, the public probably wants him to be less corny with an example being his “I am Spartacus” moment during the Kavanaugh confirmation hearings.

PEO Cupid Analysis: Coming in at the final spot in the Love Meter rankings among serious contenders is Sen. Gillibrand, who announced that she’s running for president in 2020 during the Late Show with Stephen Colbert on Jan. 15 — a move that could be considered slightly old-fashioned. She’ll have to prove she’s anything but that since she’s already drawing comparisons to 2016 runner-up Hillary Clinton, who lost to Donald Trump. Fortunately, 59% of likely voters have no opinion or have never heard of her, which means Sen. Gillibrand can rise up in the ranks if her message connects with the public.

PEO Cupid Analysis: Due to the timing of the Morning Consult poll, Sen. Klobuchar did not register on the favorability poll since she announced her run for president on Feb. 10, which is the same day the results were calculated. However, the public money immediately skyrocketed her from 17th place to a tie with Sen. Sanders in the fifth spot. Many experts believe she is a contender to be reckoned with and has a great chance to defeat President Trump in 2020 if she receives the Democratic nomination. We’d likely rank her just behind Sen. Harris since she is still rather unknown to the public but likely has a decent favorability ranking. However, even though she doesn’t rank on our list, she’s unquestionably a candidate to watch out for in the coming months.