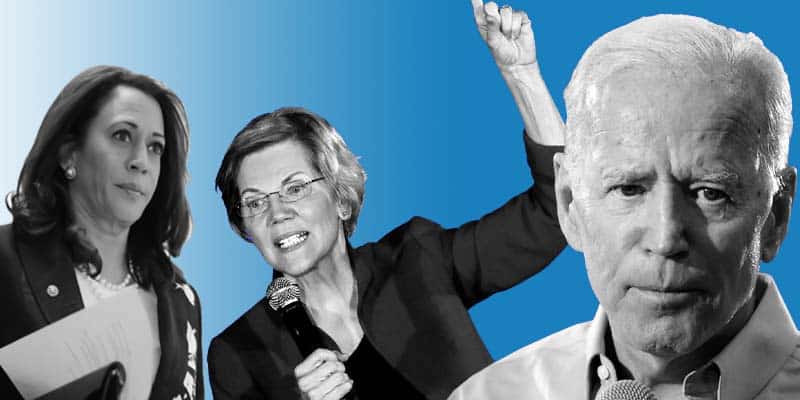 The second Democratic debate is in the books.

The party frontrunners, Sen. Kamala Harris (+300 odds to win the Democratic nomination after the second debate via BetOnline) and former Vice President Joe Biden (+300), highlighted Night 2 in Detroit, continuing their rivalry but also taking shots from the other Democratic candidates.

The biggest storyline from the first debate in June was Harris calling out Biden’s support of US Senators that opposed desegregation busing in California. Harris’s attack helped give her the party’s best odds to earn the nomination.

However, after the conclusion of both nights of the debate, Sen. Elizabeth Warren and Biden jumped into a three-way tie at the top of the party at +300 odds to be the Democratic nominee.

Coming into last night’s debate, sparks were bound to fly between Biden and Harris following the June showdown. As the candidates were being introduced, Biden even told Harris: “Go easy on me, kid.”

One major point of contention the two shared revolved around healthcare reform. Earlier this week, Harris released her healthcare plan that would provide a government-backed plan but would not eliminate private insurance.

Her reply: “You’re just simply inaccurate in what you’re describing.”

While the two continued their row, the other candidates took their shots.

Rep. Tulsi Gabbard (+2000) went directly for Harris’s record as a prosecutor in California during the debate, calling her views on marijuana decriminalization and justice reform into question.

“I’m deeply concerned about [Harris’s] record. There are too many examples to cite but she put over 1,500 people in jail for marijuana violations and then laughed about it when she was asked if she ever smoked marijuana. She blocked evidence that would have freed an innocent man from death row until the courts forced her to do so. She kept people in prison beyond their sentences to use them as cheap labor for the state of California.”

Before the debate, Gabbard’s odds were only +3300 of winning the Democratic nomination.

Biden was not spared from the attacks himself.

Sen. Kirsten Gillibrand (+10000) questioned Biden on his 1981 op-ed that made reference to working moms creating the deterioration of the family, Washington Gov. Jay Inslee (+10000) challenged Biden to treat climate change with more urgency, and former HUD secretary Julián Castro (+6600) claimed Biden didn’t learn “the lessons of the past” about immigration.

One of the night’s most memorable lines came from Booker after Biden criticized his management of the police when Booker was the Mayor of Newark.

“Mr. Vice President, there’s a saying in my community that you’re dipping into the kool-aid and you don’t even know the flavor.”

Quips like this helped boost Booker’s image and notoriety, even giving a slight boost to his odds. Before the second debate, BetOnline gave Booker +4000 odds to earn the Democratic nomination. After the second night in Detroit, his odds went up to +3300.

Other notable odd changes include Sen. Bernie Sanders and Mayor Pete Buttigieg from the first night. Despite CNN claiming the two to be in the debate’s winner group, both had their odds drop.

Before the debate’s start, Sanders had +450 odds of getting the nomination before falling to +700 today. Buttigieg also saw his nomination odds decrease from +700 to +800.

The next debate is not until September 12 and 13, assuming more than 10 qualify and force a two-night event. To qualify, candidates must register at least 2% support in four polls and have 130,000 unique donors before the August 28 deadline.

ABC will host the third debate from Houston, Texas. The broadcast will be available on ABC, Univision, ABC News Live, ABCNews.com, Hulu Live, The Roku Channel, and Facebook Watch.

The updated list of Democratic nominations and Presidential election odds are listed below. The list also features each candidates’ odds prior to the second debate in parentheses.