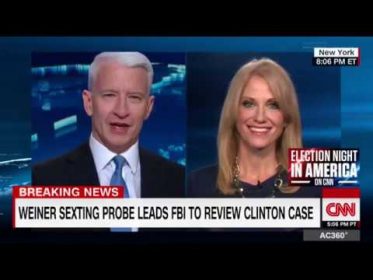 Trump should definitely consider Anthony Weiner to be the gift that keeps on giving thanks to the impact that the former Congressman’s latest scandalous drama has had on the presidential race. Both the current presidential polls and the presidential betting odds have tightened after the FBI announced that it is reopening its investigation into Clinton’s handling of classified emails.

Betting odds have favored Trump more than the polls have, and while Clinton is still the favorite to win the election, the odds have dramatically shifted favorably for Trump.

When investigating Weiner’s sexually explicit correspondence with underage girls, emails were found belonging to his estranged wife Huma Abedin that may be connected to Clinton’s mishandling of classified emails via her own personal server.

The FBI has acquired a warrant to search Weiner’s computer for evidence related to Clinton’s email scandal. It has been reported that Weiner is cooperating with authorities, presumably in hopes that it will soften the blow on his own underage sexting charges.

Political experts are not in agreement concerning the reason that the polls and odds have tightened in the race. Some analysts believe that the ongoing email scandal was already woven into the odds and poll results deeply enough that this new development won’t affect matters much, arguing that Trump was receiving a surge in support prior to the FBI’s announcement of reopening the investigation.

Others believe that the Abedin emails are the final nail in Clinton’s coffin, causing her support to diminish. It does seem like a strange coincidence that the poll numbers and odds shifted at the same time the FBI decided to take a closer look into Clinton’s emails.

There are high rollers that are still backing Clinton at International online sportsbooks despite the Weiner emails surfacing. Clearly those bettors do not believe the scandal will amount to much as we enter the last week of the 2016 Presidential race. The odds are adjusting towards the middle between the two candidates.

Clinton’s favorable lead is shrinking while Trump’s ‘underdog’ position is strengthening, with the spread between the two decreasing. We are seeing current betting odds with Clinton at -275 and Trump at +190. That is the weakest lead we’ve seen for Clinton and the strongest position for Trump in the odds throughout the entire race. The spread is undeniably shrinking.

Regardless of how dramatically the Weiner emails have affected the presidential race, we are certain of one thing, the odds are moving away from Clinton and towards Trump. The shift does not yet favor Trump overall, he’s still the underdog, but depending on what emerges this week concerning the Weiner investigation, we could see the odds swing dramatically in one direction or the other. With so much uncertainty and the vague threat of criminal charges hanging over Clinton’s head, it has become anyone’s game.