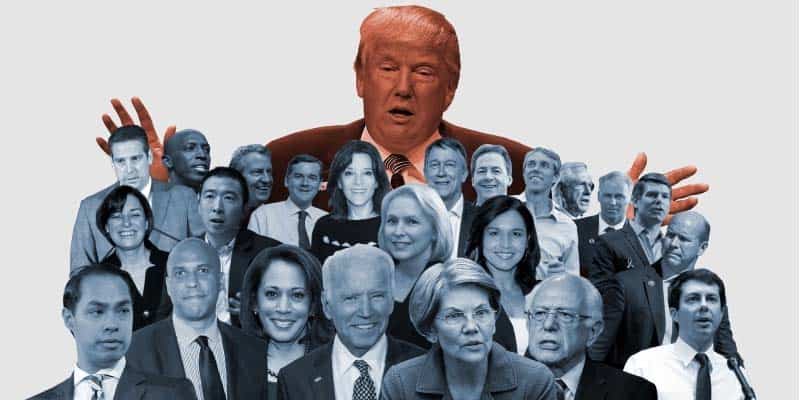 2019 Year In Review: 2020 Presidential Election Odds Then And Now

When the history books are written, I think we can all agree that 2019 will go down as one of the all-time craziest years for U.S. politics.

But with 2020 just around the corner and the odds to win the presidential election beginning to show a clearer picture, it appears next year will undoubtedly turn things “up to 11.”

For President Donald Trump and the Republicans, the year started with the Mueller report, but in the Summer, the Ukraine whistleblower complaint would dominate the media cycle until the end of the year.

The latter ultimately led to Trump’s impeachment odds paying out after the Democrat-controlled House of Representatives approved two articles of impeachment on Dec. 18, charging the President with abuse of power and obstruction of Congress.

But despite becoming the third sitting President to be impeached by the House in U.S. history, the odds are against the GOP-controlled Senate removing Trump from the Oval Office.

Adding to this is the fact that no President has ever been impeached while up for reelection, and the partisan impasse means the voters will ultimately decide whether Trump remains in the White House on Nov. 3, 2020.

And as 2019 comes to an end, Trump’s reelection odds show him favored to win a second term. In fact, the President’s chances of winning in the general election are higher now than they were in January.

On the flip side, following the odds to win the Democratic nomination turned into one of the most up-and-down rollercoaster rides of all-time as the primary election cycle got underway with one of the most crowded fields of contenders in the history of the United States.

In total, there are three major takeaways when looking at the betting odds on the 2020 Democratic race:

The first votes of the Democratic presidential primary will be cast in 35 days when the Iowa Caucus is held on Feb. 3, 2020—the day after Super Bowl LIV.

And despite what any pundit says or any poll shows, it’s still anyone’s race to win if the candidate in the top 10 on the odds board.

Below is a comparison of the odds for all the candidates who declared at some point during the year. The list displays their current betting odds of being elected President in 2020, and each candidates’ chances from Jan. 1, 2019 is shown in paratheses.

And on that note, we bid farewell to 2019 and want to wish everyone a Happy New Year! The 2020 election will surely be one of the most exciting in history, so buckle up and get ready for next year’s wild ride to the White House!