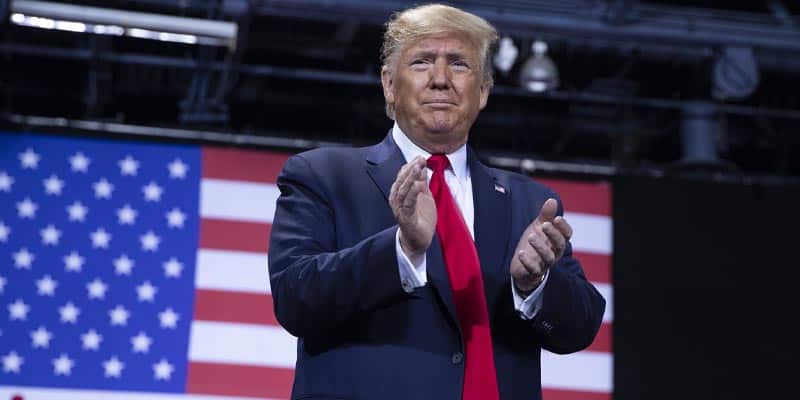 House Impeaches President Trump. Here’s The Odds For What Happens Next.

For the third time in the history of the United States, the House of Representatives has impeached a sitting President.

President Donald Trump was impeached on Thursday, Dec. 18, with the House approving two articles—abuse of power and obstruction of Congress—against him nearly along party lines.

Here’s the vote count for both Article I and II of the resolution.

Donald Trump becomes the 3rd U.S. President to be impeached by the House of Representatives.

The House of Representatives approves Article II of the resolution (obstruction of Congress) against President Donald Trump:

Trump is now the third sitting U.S. President to be impeached and face removal from office in the Senate. With the House approving impeachment, his charges fall under Section 4 of Article Two of the U.S. Constitution, which reads as follows:

“The President, Vice President and all civil Officers of the United States, shall be removed from Office on Impeachment for, and Conviction of, Treason, Bribery, or other high Crimes and Misdemeanors.”

The two articles of impeachment from the lower chamber now head to the upper chamber where a Senate trial for Trump’s charges will take place, and political betting sites have released a new batch of prop bets.

With Trump’s impeachment odds paying out for bettors last night after the Democrat-controlled House passed the resolutions, the attention now turns to whether the President will be removed from office by the Republican-controlled Senate.

Will the Senate vote to remove President Trump from office?

The betting odds on whether the Senate—which has 53 Republicans, 45 Democrats, and 2 Independents who caucus with Democrats—will vote to convict Trump and remove him from office is one of the most one-sided props you’ll ever see in politics.

The prop bet for whether Republican Senate Majority Leader Mitch McConnell will dismiss the two articles of impeachment is much closer to having a 50/50 outcome, with “Yes” receiving +160 odds, 35.33% chance, and “No” getting -210 odds, 64.68% chance.

As of a week ago, McConnell stated he is working with GOP Senators to acquit Trump rather than outright dismiss the House’s passed articles. Considering he’s on record with this stance, betting on “No” ($210 bet wins $100) holds a lot of value and has a good return on investment.

With the following Senate trial prop bets, we advise treading lightly. The Over/Under on the number of Republican Senators who vote in favor of impeachment favors the under since it’s more likely that all 53 members will side with President Trump.

However, because they could face potential backlash when they’re up for reelection, it’s probably safe to assume they too will vote to acquit Trump. Oddsmakers agree and favor a “No” vote on impeachment from all three GOP Senators.

Total GOP Senators who vote in favor of impeachment

Will Mitt Romney vote for impeachment?

Will Lisa Murkowski vote for impeachment?

Will Susan Collins vote for impeachment?