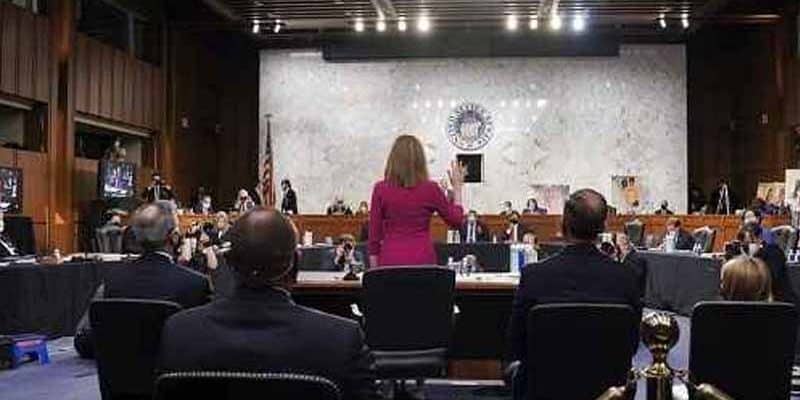 Sunday was the last day of debate before the official cloture (a vote to limit debate). Democrats used every minute to protest the confirmation, speaking against Barrett throughout Sunday night.

Senate Democrats are taking over the floor all night to fight this sham process by Senate Republicans.

We will not stop fighting.

The confirmation of Judge Barrett will solidify a 6-3 conservative majority in the Supreme Court, an outcome that Democrats warn will have negative consequences for the nation. Republicans outnumber Democrats in the Senate by 53-48 votes. Republicans will likely induct Barrett with a 51-48 vote. Sen Susan Collins (R-ME) is the only two GOP senator pledging to vote no.

But what’s going on with the supreme court odds and the partisan battle? Democrats slam Republicans, calling the rushed confirmation unjust. Meanwhile, Republicans say they are following the rules and precedents set forth by previous administrations.

Senate Majority leader, Mitch McConnell (R-KY), stated, “This is something to be proud of and feel good about. We made an important contribution to the future of this country…A lot of what we’ve done over the last four years will be undone sooner or later by the next election … They won’t be able to do much about this for a long time to come.”

McConnell consistently has responded that Republicans have every right to move ahead with the nominations. The Democrats initiated a rule change in 2013 that removed the 60-vote threshold for judicial appointments. In 2017, McConnell applied this rule to appoint Supreme Court Justices as well.

Historically, most Supreme Court Justices nominated during election years have been confirmed.

The Supreme Court will be in session starting November 2nd, hearing a case on the LGBTQ and religious freedoms and a case on the Affordable Care Act.

These issues and their decisions will affect millions of Americans. The books took down their odds on Amy Barrett, reflecting a large amount of action and a near certainty of Judge Barrett’s induction.

Meanwhile, the confirmation battle in the Senate shows to have little effect on the Presidential election odds. Three of our favorite sportsbooks show varying pictures of the election.

Biden remains the clear favorite across the board, but Trump trails by a shrinking deficit on some books. Every day, voters and bettors alike share the confusion over the outcome come November. We suggest getting your wagers in now for larger payouts.