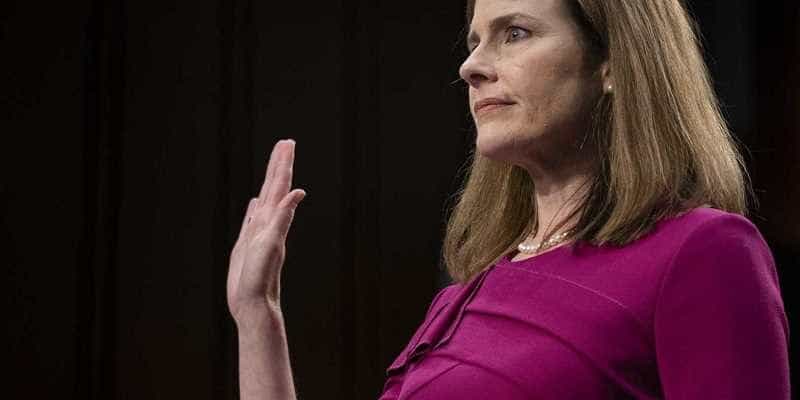 To the victor goes the spoils, right?

In its second day of hearings, the Senate Judiciary Committee Democrats used Barrett’s writings and personal statements as ammunition to press her on issues of healthcare, abortion, and same-sex marriage.

Barrett, a black belt in legalese, managed to swerve the hot-topic questions the Democratic Senators hoped would make her slip.

And Barrett has not slipped yet. When pressed by Sen. Amy Klobuchar on voter intimidation issues, Barrett responded with the following:

“I can only decide cases as they come to me litigated by parties on a full record after fully engaging precedent, talking to colleagues, writing an opinion, and so I can’t answer questions like that.”

When questioned on President Trump’s tweets that Barrett would do what is right regarding the Affordable Care Act, Barrett again deferred. She responded, saying:

“I can’t really speak to what the President has said on Twitter.”

When asked if President Trump had the authority to delay the election or claim it is fraudulent, Barrett responded:

“Senator, if that question ever came before me, I would need to hear arguments from the litigants and read briefs and consult with my law clerks and talk to my colleagues and go through the opinion-writing process…”

Despite these answers, let us dig a little deeper into what Amy Coney Barrett has said about specific issues in the past.

Poised to succeed Ruth Bader Ginsburg, a champion of women’s rights and career-long liberal, Barrett’s nomination would solidify a 6-3 conservative majority in the Supreme Court.

In a 2017 law review, Barrett openly criticized Chief Justice John Roberts’ vote in favor of Obamacare. Barrett cited that the disputed provision requires Americans to purchase health insurance or pay a penalty to be collected as part of an individual’s annual taxes.

When it comes to same-sex marriage and abortion, a letter to Synod Fathers in Christ that Barret signed reads as follows:

“We give witness that the Church’s teachings—on the dignity of the human person and the value of human life from conception to natural death; on the meaning of human sexuality, the significance of sexual difference and the complementarity of men and women.”

Barrett declined to give any specificity on her stances on the issues or how she would vote on these issues if they were to be presented. Although, both are litigation issues that the Republican party under the Trump administration are actively trying to overturn.

The Democrats will attempt to delay the nomination if possible, touting the hypocrisy of Mitch McConnell. He halted hearings on an Obama Supreme Court nomination due to its proximity to the 2016 election.

Consistently, Barrett draws distinctions between her personal moral views and her ability to apply the rule of law in court. The hearings will continue Wednesday.

Despite the ripeness for proposition bets, the political sportsbooks are shying away from any current SCOTUS odds. Old betting lines on Barrett disappeared, likely due to too much action on one side.

Her nomination seems inevitable, after all, and the Republicans have so far imposed their will on the hearings. Thus, we are likely to see Barrett confirmed and appointed shortly after the hearings conclude. Still, we miss the SCOTUS betting lines.

But do we miss the not-so-distant “I like beer!” days of Brett Kavanaugh?

So at least this seems like a step up from that.