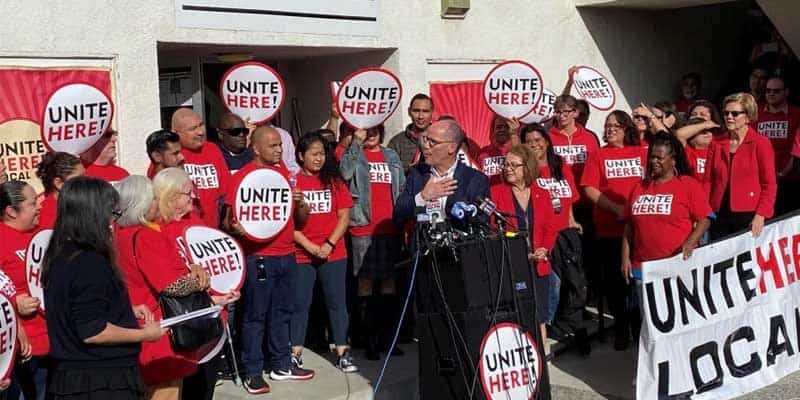 December Democratic Debate Is Back On After Union Reaches Labor Agreement

The sixth Democratic presidential primary debate is back on and scheduled for Thursday, Dec.19 after Unite Here Local 11—a union representing 150 cashiers, cooks, dishwashers, and servers at Loyola Marymount University—announced Tuesday they had “secured a tentative contract agreement” with global food service provider Sodexo.

Talks over a new deal began in March, but when students and workers began picketing on campus in November and voicing their concerns about not getting a fair agreement, Sodexo left the negotiating table.

To bring attention to the issue, union protestors threatened to picket at the university in Los Angeles—the planned host site for the Politico/PBS NewsHour debate.

Last week, Elizabeth Warren threatened to skip the debate if an agreement was not reached before the night of the debate, and the other candidates joined her shortly after.

All seven debate qualifying candidates pledged not to cross the picket line formed by campus workers and called on the Democratic National Committee to help broker an agreement between the two sides.

DNC Chairman Tom Perez helped mediate the new three-year agreement between the labor union and Sodexo, which includes a 25% increase in compensation, a 50% decrease in health care costs, and greater job security.

Who made the debate?

With the labor agreement now in place, the December debate will take place Thursday at 8 p.m. ET, and seven Democratic presidential candidates have qualified for the stage.

Kamala Harris qualified for the stage, but she ended her campaign at the beginning of the month. Tulsi Gabbard fell one poll short of qualifying while Cory Booker and Julián Castro did not receive any DNC-approved poll.

The following are the Democratic candidates who qualified and, from left to right, will be the podium order on the debate stage.

Heading into the debate, Biden is the slim favorite at +300 and currently has the best 2020 Democratic nomination odds. Steyer, who is listed at +8000 odds, has the lowest chance of becoming the nominee out of the candidates who qualified for the debate.

Debate prop bets typically release the night before the debate or on the morning of, so be on the lookout for those betting odds. For now, here are each candidates’ chances to become the Democratic nominee.